The 2017 Honda Civic: More Body Styles, Increased Performance and Still as Affordable as Ever

When it comes to cars, a lot can change in a year. Take the Honda Civic, for example. In 2016, the Civic won the coveted North American Car of the Year award. However, the 2017 model year (MY) may be even better than last year’s award winner.

The 2017 Honda Civic offers a new engine and transmission combination, body style, and performance trim. Best of all is that the price jump across the lineup — a new MY usually brings higher prices — is just $100. Here’s what’s new on the 2017 Honda Civic.

When the 10th generation Civic launched back in 2015, it came with two engines and two transmissions. Buyers had their choice of either a 2.0-liter four-cylinder engine making 158 horsepower and 138 lb-ft of torque, or a turbocharged 1.5-liter four-cylinder offering 174 horsepower and 162 lb-ft of torque. The two transmissions on offer were a six-speed manual or a CVT (continuously variable transmission). The more powerful turbo engine could only be paired with the CVT, a decision that irked both critics and consumers. For 2017, buyers can now option the 1.5-liter turbo with a stick.

The new combination spawned a new trim level for the sedan and coupe, the EX-T. The EX-T Civic Sedan has a base MSRP of $21,500, and the base EX-T Civic Coupe starts at $21,600. The cheapest manual Civic is the base model LX, although that only offers the naturally aspirated 2.0-liter engine. The EX-T Sedan is $2,760 more expensive than the LX Sedan, and the EX-T Coupe costs $2,450 more than its LX counterpart. The good news is Honda includes more in the EX-T trims than just an optimal transmission-engine combo.

Standard features on EX-T Civics include heated front seats, dual-zone climate control, a moonroof, remote engine start, a 7.0-inch infotainment touchscreen, Apple CarPlay, and Android Auto. The sedan gets a decklid spoiler for added sportiness, while the coupe receives Honda LaneWatch, and a small camera on the right mirror designed to show an image of your blind spot. Both EX-T Civics offer superb city/highway/combined mpg splits. The sedan is rated at 31/42/35 mpg while the coupe gets 30/41/35 mpg. 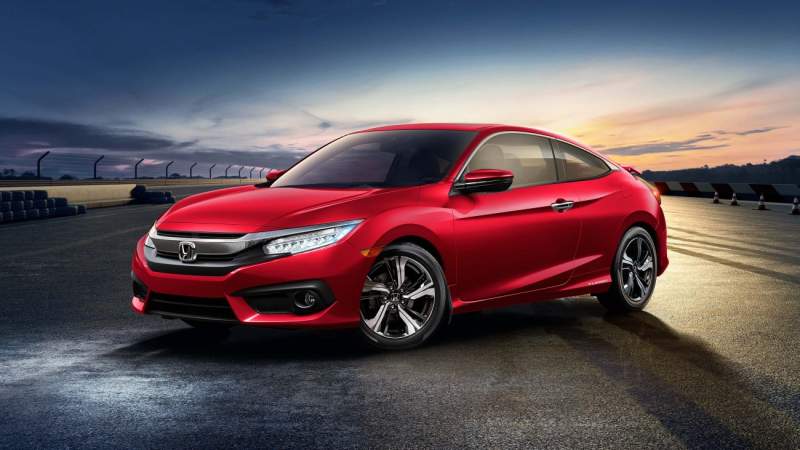