The 10 Most Expensive Vehicles Ever Sold

A classic car can be a great investment. Models made years ago by leading manufacturers such as Ferrari, Porsche, Aston Martin, and Bugatti can fetch millions of dollars at auctions. Serious car collectors will spare no expense to get their hands on a rare or desired vehicle. Collectors who have money to spare will pay outrageous sums when bidding on classic cars. The record amount paid for a single car seem to get broken again with each passing year. Here are the 10 most expensive cars sold to date.

This is the first Ferrari on our list, but it is by no means the last. The Ferrari Testa Rosa is one of the most hotly desired cars in the world. Every serious collector wants one in their garage. At an auction held in Italy in 2007, a collector forked out $9.3 million to get his hands on the vintage 1962 330 TRI/LM Testa Rosa.

This car is distinguished by the fact that it is one of the first mid-engine car models engineered by Ferrari. Oh, and it won Le Mans in 1962. The car also has a V12 engine, totally independent suspension, and tons of extra components to improve the car’s power and maneuverability. A dream for any car collector, this is one vehicle that lives up to the hype.

In the early 1930s, just as the Great Depression took hold, car maker Ettore Bugatti designed a luxury car. He planned to sell it to kings and queens around the world for royal functions and public appearances. However, royal families throughout Europe balked at the steep price tag. Only six of the Bugatti Royale Type 41 Kellner Coupe were ever manufactured, and a total of three were actually sold. Needless to say, this is an extremely rare find.

In fact, legend has it that Bugatti himself had one of these cars hidden behind a brick wall in his manufacturing plant to keep it from the Nazis who raided his offices and manufacturing center during WW II. No wonder it fetched nearly $10 million at a London auction back in 1987 (then a record price). Plus, the car is powered by a vintage 12.7 litre airplane engine.

Ever wonder what kind of a car you can buy with $10 million? It can get you a hard-to-find 1931 Duesenburg Model J Murphy Bodied Coupe. The Model J was designed by American industrialist and chocolatier Frank Hershey. It was built on a truck frame, leading the few people who have had the privilege to drive this vehicle to remark that it is literally like driving a large truck around.

Fewer than 500 of the Model Js were built before the short-lived Duesenburg company went bankrupt in 1937. In their heyday, this car was owned and driven by movie stars such as Clark Gable, as well as the British Royal family.

Again with the Testa Rosa. At an auction held in Monterey, California in 2011, a private collector shelled out $16.4 million for a vintage 1957 Ferrari Testa Rosa. The car in question was an original prototype of the classic Testa Rosa line and it had been featured in races during the 1960s at Le Mans, Nurburgring and Sebring.

The car also featured its original “pontoon” body and had a three liter, V12 engine under the hood. Add in the cherry red color and you can see why this vehicle was hard to resist. The $16.4 million paid for this car was the most ever shelled out for a Ferrari or any other car sold at auction, although the record didn’t last long.

This is literally the Ferrari featured in Ferris Bueller’s Day Off. To be precise, a custom-built fiberglass-bodied replica of a 1961 250 GT California Spyder was used in the film. True to the movie, this car is a beauty. A truly legendary Ferrari.

In fact, a 1961 SWB had been owned by the actor James Coburn, who sold it for more than $5 million in the 1970s. This particular 1961 California Spider was found in a barn in France in 2015. It sat there for upwards of half a century and had been owned by French actor Alain Delon. It sold at a Paris auction as an “unrestored, original car” for $18.5 million. As Ferris Bueller famously said, “Ferrari. Accept no substitutes.”

This classic car was one of the last ones designed by Enzo Ferrari before he left Alfa Romeo in 1939. Obviously, he then flourished by starting his own car manufacturing company. But Enzo certainly left Alfa Romeo with a wonderful parting gift.

The “8C” was a fabulous car and has been praised over the decades for its elegance and performance. Given its age, it should come as no surprise that the 1939 Alfa Romeo 8C 2900 B Lungo Spider is a very rare vehicle. One sold in Monterey, California in 2016 for just under $20 million.

The 1964 275 GTB/C Speciale is unique in the Ferrari catalogue. It’s a special piece of Ferrari history and one of the rarer vehicles ever made by the iconic Italian company. Only three models were ever built. Although it was designed to be a race car, it was only ever used on the road.

It’s also the first Ferrari road car to feature independent rear suspension. These unique traits helped this car to sell in 2014 for a whopping $26.4 million, making it one of the most expensive cars ever sold up until that point.

Mercedes-Benz has turned out its share of classic cars over the years and the 1954 W196 is high on the list of the very best ever made by the company. A vintage Formula One racer, the W196 had a massively successful racing career in the mid-1950s before being retired.

It’s legendary performance on the track, coupled with its age and rarity propelled this car to sell for just under $30 million back in 2013. It held the title as the most expensive car ever sold for just over one year before another car broke the $30 million price ceiling.

Sadly, rule changes in the World Sports Car Championship saw the 335 S replaced by the 250TR in 1958. The 335 S only really existed for one year and the limited amount of four cars produced has made this one of the rarest vehicles in the world. A 1957 Ferrari 335 S sold for a then-record $35.7 million at a Paris auction in 2016.

In 2018, a 1962 Ferrari became the most expensive car ever sold, fetching $48.4 million at an auction run by RM Sotheby’s. The record price for the Ferrari proved that the 250 GTO remains the holy grail of classic cars. Ferrari only made 36 of them and they dominated the racetrack in their day, winning more than 300 races.

Many collectors also consider the 250 GTO to be the most beautifully designed Ferrari. The word “timeless” is often used to describe this car. We can think of another word – “expensive.” This 250 GTO was sold by Greg Whitten, an avid car collector who happens to be the 15th employee hired by Microsoft back in 1979, and who enjoys a healthy amount of Microsoft stock today. Whitten said he bought the 1962 Ferrari 250 GTO for one-tenth the price he sold it for back in 2000. Now that’s a good investment! 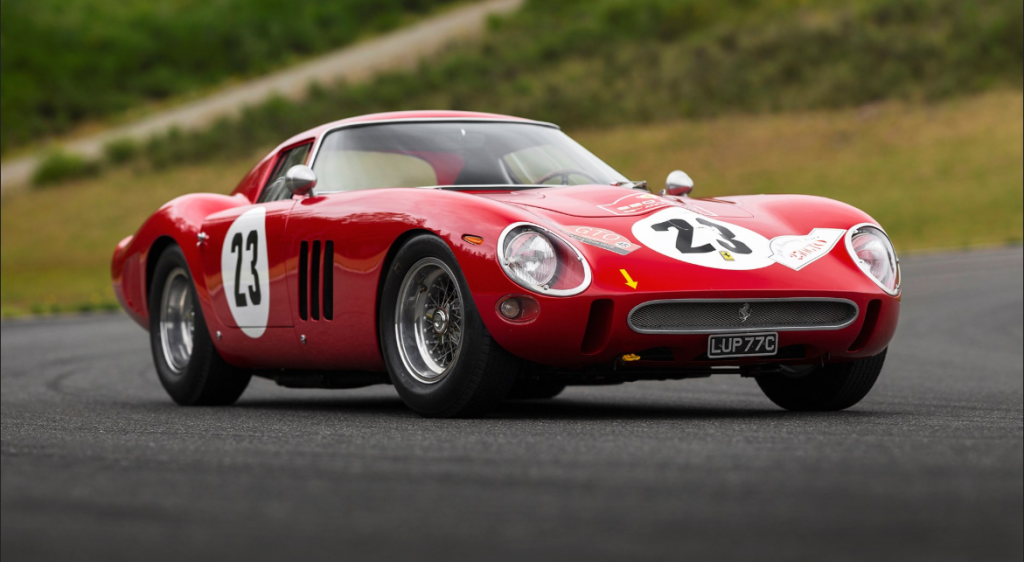