The 10 Loudest Cars You Can Buy Today

Cars are going to be a lot quieter in the very near future. Almost every automaker has plans to pump out more (or switch entirely to) hybrids and electric vehicles. Things will be especially dire in Europe, where the European Union has a new regulation that limits just how loud new cars can be. Although the end appears near for massive engines with throaty exhaust notes, the auto industry is determined to go out with a bang. We’ve rounded up ten of the loudest cars you can buy today. While we didn’t conduct scientific tests with decibel meters or anything, we promise these vehicles will rattle some windows. Make sure you check out this list before these cars become outlawed.

The 2020 Ford Mustang Shelby GT500 is one of the loudest muscle cars on the market. It’s available with an active exhaust system with four modes: quiet, normal, sport, and track. As this video from Road & Track proves, the Shelby GT500 is still plenty loud even when its exhaust is set to “quiet.” As you might expect, there’s a good chance of setting off nearby car alarms when you flip the exhaust to “track” mode. All of this sound comes courtesy of a supercharged 5.2-liter V8 engine. It sends 760 horsepower and 625 lb-ft of torque to the rear wheels. The Shelby GT500 has an MSRP of $72,900, making it one of the cheaper cars on this list.

If you’re going to sell just one car in North America, the Lotus Evora GT is a pretty good choice. Despite being powered by a Toyota-sourced V6 — it’s the same engine found inside the Camry — the Evora GT is one of the loudest and best-sounding cars on sale today. The Evora GT sounds incredible from the roadside, especially when equipped with the optional titanium exhaust. However, the experience is equally as ear-pleasing inside the cabin. The cockpit is stripped down and fitted with only the bare essentials, ensuring you can easily listen to the scream of the supercharged 416-horsepower mid-mounted V6. Despite its lack of creature comforts, the Evora GT is still priced like a luxury sports car. It carries an MSRP of $96,950,

“Deafening noise levels within the cabin” is how CarAndDriver described the sound of the McLaren Senna. The Senna is actually one of the loudest cars the magazine ever tested, with a decibel rating of 102. That’s equivalent to the sound of a train roaring by. The Senna is powered by a twin-turbocharged 4.0-liter V8 engine. It does 0-to-60 mph in just 2.8 seconds and has a top speed of 211 mph. Needless to say, the Senna doesn’t come cheap. But if you have $1,000,000 on hand, it’s not the worst investment you could make.

Dodge has finally given suburban parents with a need for speed what they’ve been asking for: a Durango with a Hellcat engine. Like the Dodge Charger and Challenger Hellcats, the Durango SRT Hellcat is powered by a supercharged 6.2-liter HEMI V8 engine. However, the Durango sends its powers to all four wheels instead of just the back two, making its power easier to put down.

Also like the Charger and Challenger Hellcats, the Durango SRT Hellcat sounds absolutely incredible with its deep, bassy exhaust note. Ironically, reviewers have noted that this Durango may actually be a bit too loud for families with small children. Then again, maybe you’re looking for something to drown out the whining from the backseat. Who are we to judge? The Durango SRT Hellcat is only available for the 2021 model year and carries a price tag of $80,995.

The Lamborghini Aventador SVJ is living on borrowed time and will soon be replaced by a hybrid. Although its replacement will pack a V12, it’s not likely to sound anything like the outgoing Aventador SVJ. The current model packs a naturally aspirated V12 engine that roars and crackles with just the lightest touch of the accelerator. It also doesn’t take much to get flames to spit from the dual exhaust. That’s a neat party trick that is certain to impress even those who can’t stand over-the-top supercars like the Aventador. This sweet sound (and the flames) can be yours for the not-so-low price of $517,770. It’s worth every penny, if you ask us.

Jaguar knows how to engineer the perfect exhaust note. Heck, even the V6-powered Jaguar F-Type sounds absolutely lovely and incredibly loud. However, nothing beats the roar of a big V8, such as the 5.0-liter supercharged unit under the hood of the F-Type R. While the Jaguar sounds like an American muscle car, it looks like a European luxury car, making it an incredible combination of raw power and suave sophistication. The F-Type R starts at $103,000, making it a solid option for those in the market for a European luxury sports car with a fiery roar.

Alfa Romeo’s answer to the BMW M3 doesn’t look very loud at first glace. However, under the hood of the Giulia Quadrifoglio is a Ferrari-sourced twin-turbo V6 engine. It pumps out 505 horsepower that emits a gravel-y roar even at idle and sounds like a performance car at full-clip. Even though it’s an Italian luxury sedan, the Giulia Quadrifoglio is actually the least-expensive car on this list. It checks in at just $74,500.

Lexus is not an automaker that immediately comes to mind when you think of loud cars. However, the LC500 is capable of hitting 93 decibels when pushed flat out. The source of all that sound is the LC500’s naturally aspirated 5.0-liter V8 engine, which sends 471 horsepower to the rear wheels. This engine is also found in the Lexus RC F, which makes a similarly throaty roar. Despite its luxury styling and beefy engine, the LC500 doesn’t actually break the bank — at least as far as cars in its class go — with its starting price of $92,950.

The Porsche 911 Turbo S is yet another example of just how loud six-cylinder engines can be when properly tuned. The twin-turbocharged flat-six in the 911 Turbo S sounds like a jet airplane taking off when pushed to the limit. It does 0-to-60 mph in 2.6 seconds and can hit a top speed of 205 mph — provided there’s enough tarmac available. Despite costing $203,500, the 911 Turbo S is actually a bit of a bargain when you consider what supercars with similar performance go for.

Ferrari is more than happy to give Lamborghini a run for its money when it comes to brutally loud V12 engines. Case in point, the 812 Superfast, which packs a naturally aspirated 6.5-liter V12 engine. This badboy produces a mind-boggling 789 horsepower and a ridiculously loud exhaust note. Compared to the Lamborghini Aventador SVJ, the Ferrari 812 Superfast has a much more conservative starting price of $335,000. 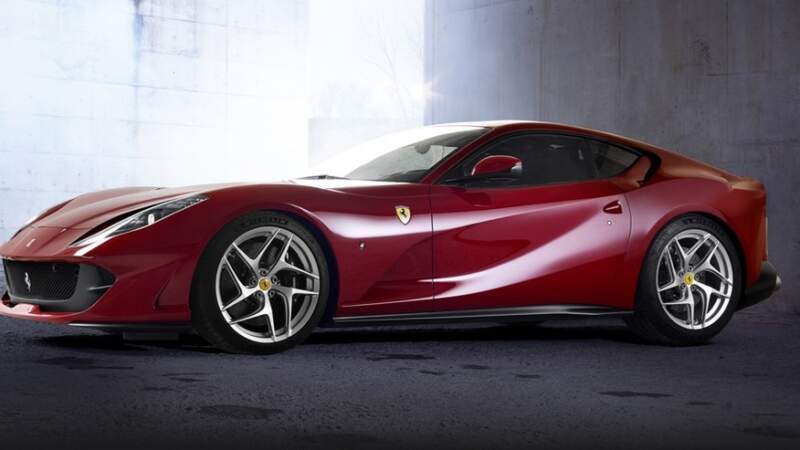