The 10 Coolest T-Tops Of All Time

If you didn’t already know, a T-Top is any car with a roof that has removable panels on each side of a rigid bar that runs down the center. Think of them like a partial convertible. The removable panel roof was first used in 1948 by The American Sportscar Company. However, the 1968 Chevy Corvette was the first U.S.-built car to feature a T-Top roof.

T-Tops proved popular for the next 20-to-25 years, rising in popularity during the 1970s and peaking in the 1980s. Eventually, the T-Top was mostly replaced by full convertibles. Today, T-Tops endure as a classic automobile whose time has largely come and gone. Here is a list of the 10 coolest T-Tops of all time.

The Dodge Magnum was first introduced in 1978 as a cheaper alternative to the popular but relatively expensive Dodge Charger. In addition to promoting the price, Dodge sold the Magnum as a more aerodynamic car than the Charger. The Magnum was sold in multiple formats, including a T-Top version.

Other features included four rectangular headlights behind retractable clear covers, with narrow opera windows, as well as power steering, brakes, and seats. The base engine was a 5.2-liter V8, while two- and four-barrel V8 engines were optional. Sadly, the Magnum never caught on with consumers. Production of the car was cancelled after 1983 In all, only 3,704 1979 Dodge Magnum T-Tops were produced, making them somewhat rare today.

T-Tops caught on in the 1970s but were at their zenith in the 80s – with 1987 being the peak of their popularity. That year, one of the T-Tops that received the most accolades was the 1987 Buick Regal Turbo T.

Lighter and cheaper than standard Buick Regals of the same period, and with aluminum wheels, the Turbo T boasted a carbureted V6 engine that could produce 190 horsepower. After a few years of tuning and refinement, a fuel injected V6 that could produce 55 more horsepower was introduced.

People have described this T-Top as a “non-traditional muscle car.” It has been praised as the coolest Buick anyone can own. To be sure, you’d be hard pressed to find a cooler Buick made in 1987.

If there was a T-Top that could give the Buick Regal Turbo T a run for its money in 1987, it was the Toyota MR2. Now known as a classic Japanese sports car, the MR2 was made back when Toyota was known for making fun, sporty cars such as the AE86 Corolla and MkIII Supra. And the MR2 was among the most fun Toyota cars at the time.

It had a rear-mounted motor that was just a Corolla front end, mounted in reverse. There was also a supercharger available with the car. The T-Top version of the MR2 was only made between 1987 and 1989. Unfortunately, they developed a bit of a reputation for having a leaky roof. Despite this fact, today the MR2 T-Tops are hotly desired among car collectors.

Any model, version, or trimline of a Ford Thunderbird is cool. But the seventh generation of the classic car that offered a T-Top option stands out. It should come as no surprise that this generation was the best-selling Thunderbird and proved extremely popular with the public.

A nearly $3,000 drop in price over previous models certainly helped to boost sales. The styling was also helpful, as the seventh generation featured a wrap-over roofline and a small-block V8 engine. Additionally, this car was the first to use a wide fixed “B” pillar, ushering in the end of pillarless hardtops. However, the door window glass remained frameless in the T-Top version of the Thunderbird.

In 1988 and 89, Dodge made a T-Top version of its popular Daytona Shelby Z. This car came outfitted with a Shelby ZA intercooled, turbocharged 2.2-liter inline-4 engine. That made it the fastest Daytona ever produced. The T-Top could hit 60 mph in eight seconds, which was fast back in the day.

Unfortunately, the T-Top Daytona is often overlooked given that it was only produced for two years. However, serious T-Top enthusiasts appreciate this car for its style, speed, and performance. In its heyday, it could compete against the best comparable cars that came out of Japan.

Critics loved the style and performance of this T-Top. Yet, all the praise from “experts” didn’t equate to sales. A lack of international marketing resulted in stagnant sales for this car, and Nissan chose to replace it with its 300ZX in 1984. Sadly, the Datsun 280ZX only lasted five short years.

Again, 1987 proved to be a big year for T-Tops. No model was bigger than the Ford Mustang T-Top. It was this Mustang that carried the now legendary 5.0-liter V8 engine. Offered in both a notchback coupe and hatchback versions, the T-Top Mustang lasted until 1991 when it gave way to a full convertible model.

The 5.0-liter Foxbody Mustangs are now a collector’s item, and these early T-Tops are prized by car enthusiasts everywhere. After the T-Top Mustang, the convertible option became the standard for open roof fun. But the T-Top Mustang is still a lot of fun too, and worth seeking out.

The Fiero is a great Pontiac, but one that never became as popular as its Firebird cousin. This may have something to do with the fact that a few Fieros actually caught on fire. Nevertheless, the Fiero endures as a classic and cool T-Top.

Sold by Pontiac as an economy car, the Fiero developed over several years into a sports car that could rival all others on this list. For the first few years, these cars were underdeveloped due to the lack of funding from GM.

That changed in 1988, when the suspension was redesigned to handle better. These cars were underappreciated in their lifetime. Fortunately, time has been kind to this T-Top. Fires aside, this car is today considered a classic.

Corvettes are cool period. But a T-Top Corvette is something to behold. They don’t come much cooler than the 1970 Chevy Corvette. This car earns special bragging rights for having the biggest production engine ever in a Chevrolet vehicle – the 454 to be precise. The 1970 Corvette is the only T-Top 454 ever sold.

Many automotive historians credit the 1970 Corvette with helping to popularize T-Tops and the concept of open top driving. The ’70 Vette is also great to look at and retains the Coupe body style that people love. Driving a classic car like this in the open air is a truly special experience.

This is it. The coolest T-Top of all time is the 1978 Pontiac Trans-Am – a legendary car that was driven by actor Burt Reynolds in the popular Smokey and the Bandit movies. One of these cars recently sold at auction for more than $300,000. Its Hollywood fame helped make the Pontiac Trans-Am one of the most recognizable and iconic T-Tops ever.

In fact, the T-Top Trans-Am endured in the late 1970s at a time when traditional muscle cars fell out of favor. The signature T-Top was first made available with the 1976 model year. The Firebird version (which Burt drove) came with a big 455 engine, the biggest engine block ever offered in a pony car. Today, the 1978 Pontiac Trans-Am endures as a classic car and piece of pop-culture lore. 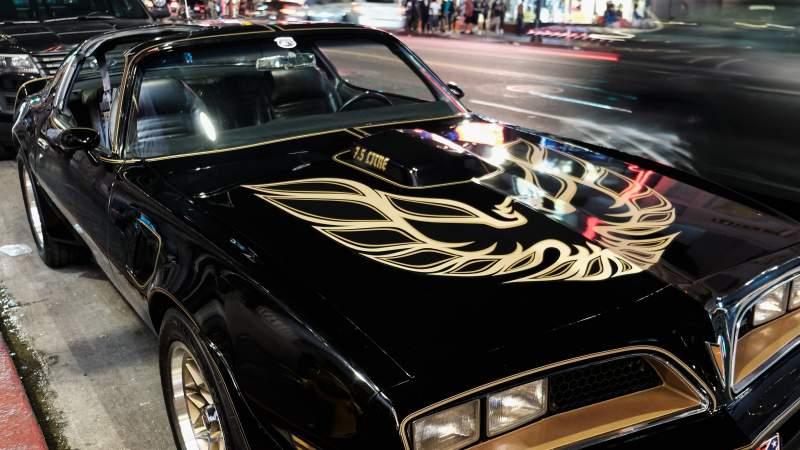