In a new poll commissioned by the advocacy group Partners for Automated Vehicle Education (PAVE), nearly half of Americans say they would not get into a self-driving taxi. The poll, conducted online by SurveyUSA, found widespread skepticism about autonomous vehicles.

Roughly 1,200 American adults were surveyed. Of them, 48% said they would “never get in a taxi or ride-share vehicle that was being driven autonomously.” Meanwhile 21% also said they were unsure about it. A fifth of respondents said that autonomous vehicles would never be safe. Another fifth stated incorrectly that it’s possible “to own a completely driverless vehicle today.”

“Americans have a lack of trust and a lack of knowledge about autonomous vehicles,” said PAVE Executive Director Tara Andringa in a news release.

A coalition of autonomous vehicle developers and road safety groups, PAVE was founded in 2019. Their stated goal is to inform and educate the pubic on the merits of self-driving cars. Its members include Waymo, Cruise, and Argo — three leaders in the race to develop self-driving vehicles. Additional members are made up of the National Safety Council, Mothers Against Drunk Driving, and the National Federation of the Blind.

The latest survey results are similar to past polls. They suggest a potential problem regarding consumer acceptance of self-driving cars. Simply put, drivers just aren’t coming around very fast.

“Companies are putting huge investment into the development of autonomous vehicles, but public opinion polls like this one show great skepticism, concern and distrust,” said Andringa.

Will The Public Ever Trust Self-Driving Cars?

PAVE plans to use this poll as a baseline to measure changes in sentiment. They will continue to gauge the effectiveness of its education campaign, which includes holding driverless car demonstrations. Sixty percent of those surveyed said they would have greater trust of self-driving cars if they knew more about how the technology works. The technology is still a mystery to many potential buyers.

Ironically, respondents who said they were aware of bad publicity related to automated driving (notably the Uber self-driving car that killed a pedestrian in Arizona in 2018) were more likely to say that self-driving vehicles are safe.

Drivers who reported having advanced-driver assistance systems on their cars currently were also more likely to be optimistic about self-driving cars. Seventy-three percent of drivers with a forward collision alert system on their car said that safe self-driving vehicles would be available within 10 years. Only 58% of those without such features were as optimistic.

Despite the continued skepticism, automakers around the world are putting increasing amounts of focus on developing self-driving vehicles. General Motors, Nissan, Renault, and many others are partnering with technology firms to create completely autonomous vehicles. Not to mention the likes of Tesla, who straddle the line between tech company and car maker. In many instances, companies are adding self-driving features to models already available today. Cadillac’s new Super Cruise feature aims to add autonomous tech to their new models.

The global self-driving car market has been valued at $24.1 billion, by Research and Markets. Connectivity technology is forecast to generate $1 trillion in revenue by 2030. The future is autonomous, it’s just a question of how quickly we get there. 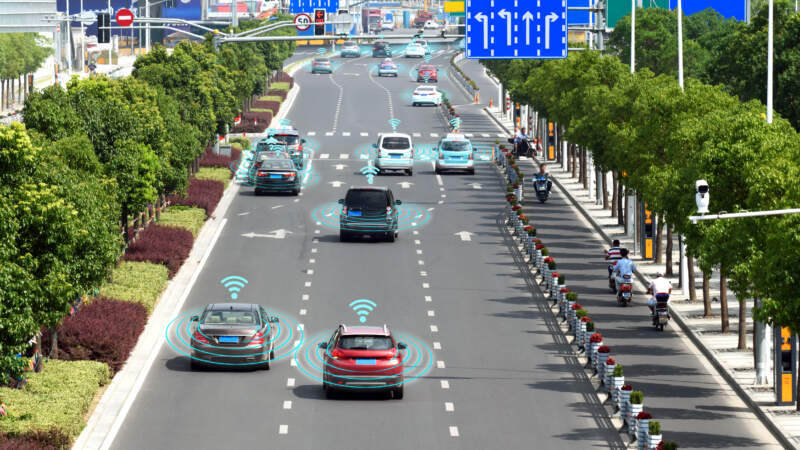