The 2021 Porsche Panamera has set a new record at the famous Nurburgring Nordschleife test track.

The four door Porsche broke the single lap record for executive-class cars. It’s the same category that also includes the Mercedes-Benz S-class and the BMW 7-series. The new Panamera, a powerful 620 horsepower Turbo S model, lapped the 12.9-mile course in a time of 7:29.81.

The 2021 Panamera is scheduled to make its official debut later in August. Until then, the test track record has the automotive world buzzing with anticipation.

Porsche has only revealed a few technical specifications for the new Panamera. Most models will have a slight increase in power. The top Turbo S E-Hybrid will reportly reach 700 horsepower. There will also likely be enhancements to its cornering, stability, body control, steering, and chassis.

The car that set the record was also equipped with Porsche’s active anti-roll bars and new sticky Michelin Pilot Sport Cup 2 rubber, which will be optional upgrades at the car’s launch. It also had a racing seat and a safety cage. These extra modifications don’t exactly make it a production model. However, it’s still pretty close.

When Can You Buy One?

We expect more information about the 2021 Porsche Panamera at the end of August. Then, it should arrive in the U.S. by early 2021. The base model is expected to start at under $90,000.

The pace at which the Panamera went around the Nürburgring doesn’t actually make it the fastest four door car ever, though. It’s just the fastest executive-class car. The title of fastest four door car goes to the Jaguar XE SV Project 8, which lapped the Nürburgring in a time of 7:18.36 back in 2019. However, the Jaguar XE is in the midrange car class, which includes sedans such as the BMW 3-series and the Alfa Romeo Giulia. 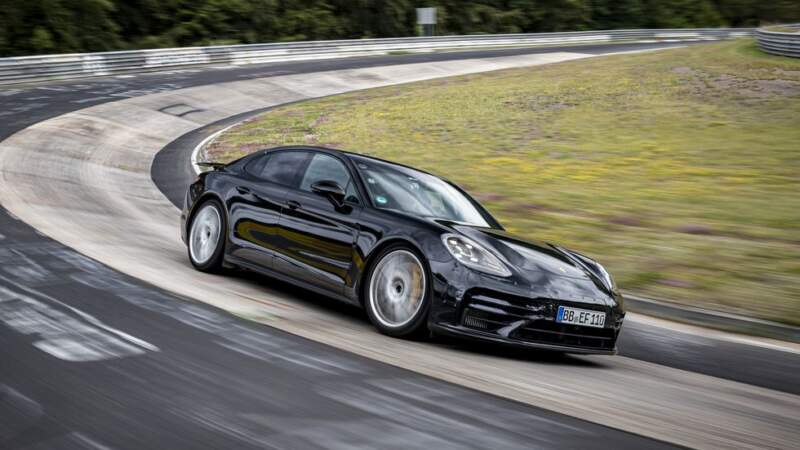