Inside The New Aston Martin DB11 AMR: A Rocket Ship On Wheels

Few cars combine power and style as well as the Aston Martin DB11 AMR. It’s the replacement for the wildly popular Aston Martin DB9, which concluded a 12-year production run in 2016. The new DB11 retains a similar appearance to the DB9, but boasts an aluminum body structure and many modern upgrades. It also comes with your choice of a turbocharged V8 or V12 engine — both are plenty impressive. Add a luxurious cabin to the package and its hard to top the DB11 AMR when it comes to luxury cars. Here’s a look inside the latest Aston Martin.

Aston Martin is one of the strongest British brands in the world. This is, after all, the car preferred by James Bond. The DB11 AMR has a gorgeous exterior designed to catch the eye. To say that this Aston Martin is sleek would be an understatement. The DB11 is pure aerodynamics. The elongated front and short back gives this car the appearance of a rocket ship. (It also has the engine to back up that claim.) Available in a coupe or convertible, the DB11 AMR has an amazing exterior style. This is a car designed to make friends and family jealous.

The DB11 AMR engine is one of the key selling points. You have your choice of two very distinct engines: a twin-turbocharged 4.0-liter V8 or a twin-turbo 5.2-liter V12. The former produces 503 horsepower and 498-pound feet of torque, while the latter produces 630 horses and 516-pound feet of torque. Both engines pair to an eight-speed automatic transmission that transmits power to the rear wheels. You really can’t go wrong with either option.

Each engine has massive thrust and athletic moves, combined with an exhaust note that is truly menacing on the streets. In terms of performance, the DB11 has smooth acceleration and can hug even the tightest turns. Sport mode offers an even livelier engine. The DB11 also comes with an adjustable suspension that further sharpens the handling experience.

The DB11 comes in three trimlines, and, spoiler alert, they’re not cheap. The base model DBR costs $201,820, the mid-range DB11 Volante will run you $201,820, and the top level AMR costs a whopping $243,825. Clearly, this isn’t a car for just the average shopper. But for those with the means, we recommend the high-performance AMR variant.

It’s the best way to get into the V12 engine, which is a notch above the V-8. You can also select your preferred paint color and exterior trimmings from a myriad of options. There are a number of interior configurations too, including an optional Bang & Olufsen audio system and touchpad control for the infotainment system. Other options include a heated steering wheel and blind-spot monitoring. As mentioned, the Aston Martin DB11 is available as a coupe or a convertible with a power-operated soft top. Luxury appointments such as soft leather seating and advanced interior technology come standard.

Inside, the DB11 AMR is pure luxury. Think soft leather throughout, heated and power-adjustable front seats, and passive entry. If there is one knock on the DB11, it’s that cargo space is limited. Then again, who buys a DB11 to lug things around in? This isn’t a car you use to take the kids to hockey practice. There is a center console bin that slides open to reveal cupholders and a useful tray, though.

Aston Martin aficionados will be heartened by the fact that the DB11’s interior improves upon its predecessor, the DB9, with comfy leather upholstery and wood trim. The front seats are firm and hold you in place when cornering. There are indeed two rear seats. Aston Martin has called the DB11 AMR a “2+2” car. However, the reality is that the DB11’s rear seats are a little too small to fit adult-sized people comfortably. They’re better suited for luggage.

When it comes to technology, the DB11 AMR is loaded. The infotainment system is comprised of an eight-inch screen. It’s controlled via a standard rotary controller as well as an available touchpad on the center console. Along with a 400-watt audio system and SiriusXM satellite radio, Aston Martin equips every DB11 with a Wi-Fi hotspot. You can upgrade to either a 700-watt sound system or a 1000-watt Bang and Olufsen custom unit, if you prefer.

Those interested in driver-assistance technology can add blind-spot monitoring and auto parking. Other safety features include a standard 360-degree camera system, standard front and rear parking sensors, and available self-park assist. The DB11 is also armed with a state-of-the-art navigation system.

Aston Martin provides a fairly basic limited and powertrain warranty. It’s a bit of a shame, considering the cost of the DB11 AMR. They also don’t offer any complimentary maintenance. It’s a bit of a knock, since many of their competitors do. With the DB11, you’ll get a limited warranty that covers three years or unlimited miles. There’s also a powertrain warranty for three years and unlimited miles. It’s rather ho-hum when compared to the coverage offered on other high-end sports cars.

With a powerful V8 or V12 as the only engine choices on the DB11, fuel economy is clearly a low priority. No one will buy this car expecting it to be great on gas. Regardless, the V8 engine has a respectable Environmental Protection Agency rating of 18 miles per gallon when driven in the city and 24 miles per gallon when driven on the highway. By way of comparison, the W-12–powered Bentley Continental GT car is less fuel efficient, at 12 MPG of city driving and 20 MPG on the highway. Obviously, the V12 DB11 drops those numbers slightly.

The Not So Good

The Aston Martin DB11 AMR is a sports car that accomplishes its mission. This is essentially a luxury rocket ship on wheels. If the engineers at Aston Martin have committed one sin, it’s that they are trying to be too many things to too many people. The rear seats, for example, are probably unnecessary. However, when rating the DB11 on its merits as a high-performance sports car, it remains in a class of its own. If you can afford the expensive price tag, you won’t be disappointed owning the DB11 AMR. This is a classy car worthy of the Aston Martin brand. James Bond would approve. 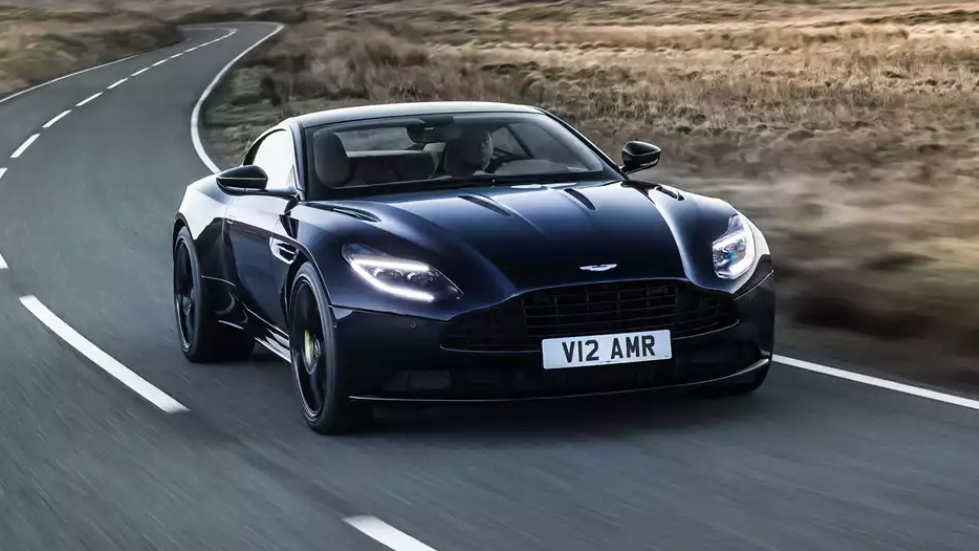