Inside the Lamborghini Sian: A Hybrid From the Future

There’s no car quite like a Lamborghini. Just say the name of the iconic sportscar and people gush. Whether it is the design elements or the powerful performance (or both), people seem to love Lamborghinis.

Indeed, there have been some classic models produced by the venerable Italian car manufacturer over the years – from the Jalpa to the Diablo (each car is named after a bull). However, no previous Lamborghini is quite like the new Sian. This is model was recently unveiled to great acclaim by both the automotive press and the drooling public. The all-new Sian stands apart from Lamborghinis of the past, and for good reason. Here is everything you need to know about the new Sian.

With the Sian, Lamborghini is following Porsche and Ferrari with the creation of a gas/electric hybrid supercar. This car is a lot more than just a Lambo with a battery stuffed inside, though. The Sian uses a supercapacitor to propel the vehicle forward and give it insane speed.

The engineers at Lamborghini added a 48-volt motor to the car’s gearbox, providing an additional 34 horsepower to the V12 engine. It helps give the Sian immediate torque while punching down the accelerator. The supercapacitor is employed in the Sian instead of a typical lithium-ion battery pack. Lamborghini says it’s “three times more powerful than a battery of the same weight and three times lighter than a battery producing the same power.” The car’s powertrain produces 819 horsepower and shoots the Sian from zero to 62 mph in 2.8 seconds. Not bad for a hybrid!

It Has a Unique Name

The name “Sian” means “flash or lightning” in the Bolognese dialect. That’s an apt description of such a fast production supercar. Recently at the Frankfurt Motor Show, Lamborghini announced that it is amending the name of the Sian and that it will henceforth be known as the “Sian FKP 37.” Why the name change, and what does “FKP 37” mean? I

t is the initials of Ferdinand Karl Piëch, the German engineer and former Chairman of Volkswagen who was also the grandson of Ferdinand Porsche. The letters “FKP” represent Piëch’s initials and the “37” stands for the year in which he was born – 1937. Piëch sadly passed away in August 2019 of a heart attack. So, why is Lamborghini honoring him? It was Piëch who orchestrated the purchase of Lamborghini and brought it under the Volkswagen Group of Companies.

It’s Based on the Lamborghini Aventador

The Sian shares its engine with the SVJ variant of the Lamborghini Aventador, which both Car and Driver and Motor Trend called “the best Lamborghini ever.” Other similarities to the Aventador include an electronically controlled all-wheel drive system, similar weight, and almost the same drivetrain.

However, the Sian is obviously different from the Aventador in that it has an electric motor integrated right into the gearbox. Other modifications to the engine include the addition of titanium intake valves and a new exhaust system that raises the power output to 774 horsepower. The Sian’s engine is also mated to a seven speed semi-automatic transmission. The car also employs a rear mechanical self-locking differential for improved handling.

Only 63 Are Being Made (and They’re Expensive!)

To say the Sian is an exclusive car is a bit of an understatement. Lamborghini has said it is only producing 63 models of this supercar. Sadly, they have all been spoken for via pre-orders. You can bet that with such a limited production run, and given all the Sian’s cool features, this car is expensive. The starting price is a cool $3.6 million. That cost can be bumped up with add-ons and custom design changes.

Many buyers are paying more than $4 million for a Sian. While that price might seem outrageous, keep in mind that Lamborghini has said that each Sian will be “individually styled by the owners themselves.” This means that each owner can truly customize their own Sian for a one-of-a-kind toy. For $4 million, we would hope so.

The Sian Has Impressive Technology

A Lamborghini wouldn’t be a Lamborghini without an amazingly cool design. A car wouldn’t cost this much if it wasn’t loaded with cutting edge technology. The Sian has both in spades. Features worth highlighting include sculpted aero wings and smart heat material that rotates vanes for extra airflow when a certain temperature is reached.

The carbon fiber body and sleek headlights are distinct features of the sculpted exterior. The number “63” is emblazoned on the side of the spoiler in tribute to the company’s 1963 foundation year and the limited production run of the Sian.

Inside, a touch screen has been installed in the center console. Lamborghini has said that they are incorporating 3D displays for the very first time with the Sian. Anyway you look at it, the Sian is impressive inside and out.

With the Sian, Lamborghini is diving headfirst into the pool of hybrid supercars and taking no prisoners. While its debut was less than a month ago, the Sian has quickly distinguished itself from the crop of other gas/electric sportscars being released by competitors such as Porsche and Ferrari.

The Sian’s combination of design and power could prove a gamechanger for an auto industry that seems to have finally made greener vehicles that still provide eye-popping performance. Take that, Prius! If you’re one of the lucky few who can afford to shell out upwards of $4 million for a Sian, good for you. The rest of us will have to be content to stare and dream. (Sigh). 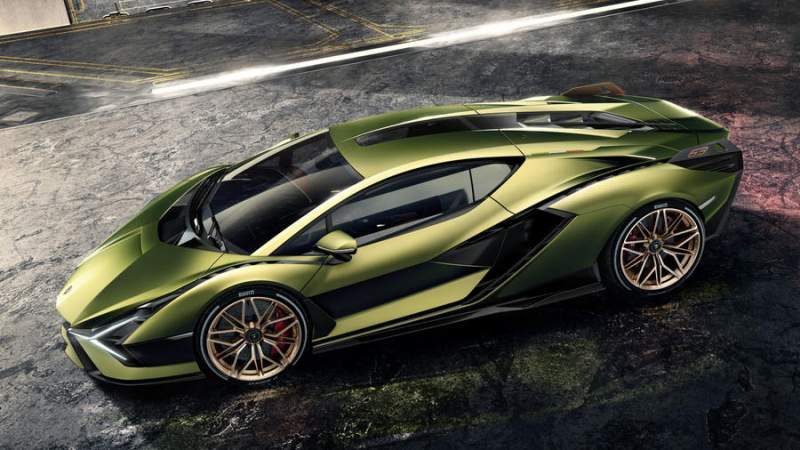