Inside the 2021 Hyundai Nexo: A Pricey EV Alternative

It’s a given that electrified cars are the future. However, automakers are gearing up for the future in a variety of different ways. While the likes of Tesla and Volkswagen are investing heavily in the development of battery electric vehicles (BEVs), that’s not the only Green option. Asian giants Toyota, Honda, and Hyundai are allocating significant portions of their resources to fuel-cell electric vehicles (FCEVs). The Hyundai Nexo Fuel Cell crossover is the latest addition to the FCEV segment. And from what people are saying, it’s really good.

Hyundai was actually the first automaker to build a hydrogen fuel cell automobile. The Tucson FCEV debuted in 2013 and Toyota followed suit in 2015 with the Mirai. Unlike the Tucson FCEV, the Nexo sits on its own bespoke platform. Thanks to that, the Nexo is better packaged, offering more practicality, utility and driving range. Also, unlike the Tucson FCEV that was only available on lease, the 2021 Nexo can be purchased outright.

There is a massive disclaimer that needs to be made, though. Currently you can only purchase and drive the 2021 Nexo in California. It’s the only state with public hydrogen fuel stations so far. If you live in the Golden State, are considering moving there, or just want to know what the Nexo is all about, then continue reading. We’ll cover it all.

The 2021 Nexo carries over mostly unchanged from 2020. This five-passenger crossover SUV is offered with only one fuel-cell powertrain option. It’s available in Blue and Limited trim levels. Whether you buy or lease the Nexo, Hyundai will throw in three years (or $15,000 worth) of complementary hydrogen fuel, whichever comes first. It also comes with three years or 36,000 miles worth of complimentary maintenance.

Exterior Styling: A Preview of Cars to Come

If you couldn’t tell from looking at it, the 2021 Nexo is designed with the future in mind. It has clean lines, sweeping curves, and a fluid, aerodynamic shape that achieves a low drag coefficient of 0.329. Hyundai wanted to preserve the Nexo’s lines so badly that it even integrated the door handles into the body panels. Up front, the Nexo features a wide grille and Hyundai’s signature two-tier headlight setup. An LED light strip runs across the SUV’s nose, connecting the LED daytime running lights and creating a unique front lighting signature.

The rear also receives some fancy lighting work in the form of triangular LED tail lights. The back-end sports D-pillar wind blades and a dynamic rear bumper design. While the Nexo is a green vehicle, it still has a surprisingly athletic stance — especially when optioned with the available 19-inch alloy wheels.

Under The Hood: An ‘Engine’ That Only Emits Water

Instead of having a front trunk like most other EVs, the 2021 Nexo packs a large hydrogen fuel stack under the hood. In the fuel stack are membranes, where hydrogen from the SUV’s storage tanks combines with oxygen from the air that is drawn in through the front intakes. The reaction between the hydrogen and oxygen produces water and electric energy. The energy, obviously, is used to power the SUV and recharge its battery. The water produced in the process drains out through the exhaust pipes.

This unique powertrain achieves a peak output of 161 horsepower and 291 lb-ft. of torque. That’s enough to propel the Nexo from 0-to-60 mph in 8.4 seconds. The Nexo can’t exactly be called quick, but it does beat the Toyota Mirai to 60 mph. So that’s something.

Here is where the Nexo outshines EVs like the Tesla Model Y. The Nexo takes just a few minutes to top off. That should be comforting to eco-minded drivers who don’t have the patience to fast-charge an EV. When fully refilled, the 2021 Nexo Blue can go up to 380 miles on a full “tank.” Hyundai proudly declares that is enough range to get from San Francisco to Los Angeles. The Nexo Limited offers a bit less range and can travel a max of 354 miles.

What’s Inside: A Button-Filled Cabin

The inside of the 2021 Nexo is a mixed bag. Instead of going with a minimalist style like Tesla, Hyundai chose to fill the Nexo’s center console with large buttons and knobs. It gives the cabin a bit of a 1980s vibe. The retro center console, however, blends well with the ultramodern and high-resolution full-color displays that sit on the dash and light up the cabin, creating a futuristic look. According to Hyundai, the cabin is made with “eco materials.” For example, the seats feature leatherette material blended with bamboo-thread-based bio fabric, along with bio-plastic and bio-carpet made using sugar cane.

The 2021 Nexo isn’t the biggest crossover out there. However, it still offers a fairly roomy cabin given its size. It actually boasts some impressive cargo space. The Nexo can store 29.6 cubic feet of stuff behind its rear seats. That number rises to 56.5 cubes of cargo with the rear seats folded down.

The larger 12.3-inch infotainment touchscreen system sits right above the center console. Apple CarPlay and Android Auto are standard, as is GPS navigation. The Limited trim come standard with a 440-watt Krell eight-speaker premium sound system that includes an eight-channel external amplifier and an inch-inch subwoofer. In other words, your tunes should really pop in the Nexo.

One of the coolest active safety features of the 2021 Nexo is its Remote Smart Parking Assist system. Unfortunately, it’s only available on the Limited trim. When activated, this autonomous parking system can identify a parking spot and automatically navigate the SUV into that space. The system also enables drivers to summon the SUV out of a parking spot with the push of a button on the key fob.

Standard safety tech includes forward collision-avoidance, lane-follow assist, a driver attention warning, and a High Beam Assist system. The Limited trim also comes standard with a surround-view camera and a blind-spot monitoring system which projects a live video feed from either side of the vehicle onto the display when you are changing lanes.

The 2021 Nexo Blue is priced at $60,120, while the more premium Limited trim runs $63,570. Hyundai does not really offer options packages for the Nexo, so the choice here is really between more standard features and ranges. Given the lack of hydrogen fuel stations in California, the choice seems clear. On the other hand, if you’re planning to use the Nexo as a second car, it may be a tougher choice to make.

The Hyundai Nexo is a compelling option in FCEV class. Unfortunately, that class isn’t very large. The Nexo’s biggest issue is its price tag. Most modern compact crossovers already offer pretty good gas mileage. The all-electric crossover segment is becoming pretty competitive too. Heck, the electric Hyundai Kona is a compelling alternative to the Nexo — and it tops out at $45,000. The price tag, plus the fact that the Nexo can only be driven in California, make it an intriguing option for only the most dedicated environmentalists and early adopters. 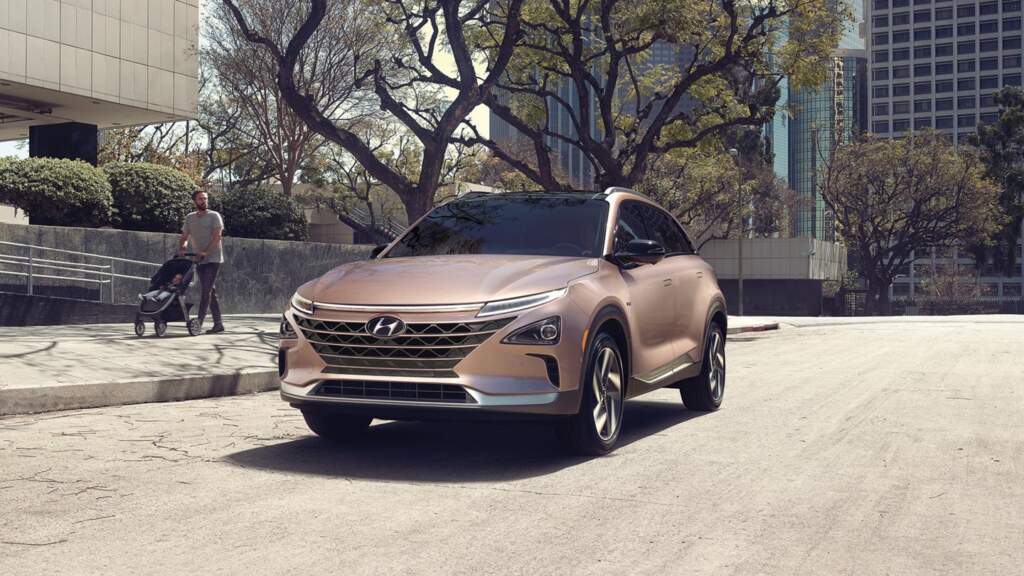