Inside the 2021 Hyundai Kona: Quirky, Affordable and Fun

Despite debuting three years ago, the Hyundai Kona is still capable of captivating onlookers with its bold styling. However, there’s more to the subcompact crossover than its squinty front end. For starters, the 2021 Kona features a gutsy 175-horsepower turbocharged engine and sharp handling. They combine to make it surprisingly fun to drive. It also has an interior that offers plenty of modern tech and a few premium amenities. If that wasn’t enough, there’s also an all-electric Kona available too. It has a 201-hp electric motor and an estimated max range of over 250 miles.

The Kona fits a lot of style and versatility into a small package. It’s certainly capable of going head-to-head with some of the top competition in its class, including the Mazda CX-30, Kia Soul, and Honda HR-V.

The most noteworthy addition for 2021 is the new “Night Edition” trim. It slots between the SEL Plus and Limited models. As the name suggests, the special edition Night trim comes with a sleek blacked-out color scheme — but that’s not all.

The Kona Night Edition also features 18-inch black wheels (because of course), LED headlights and taillights pulled from the Kona Limited and Ultimate trims, and aluminum pedals. The Night Edition is powered by the optional 175-hp turbo-four.

The Kona occupies the space once held by the Nissan Juke as the quirkiest crossover on the market. While the Kona’s proportions are more mainstream than the Juke’s, its razor-thin LED headlights highlight a surprisingly aggressive front-end design. Unlike the Juke, the Kona features a more conventional rear end, which balances out the eccentric look of the crossover’s face quite nicely. Really, the only misstep here is the overabundance of plastic (although that was likely added to make it clear that the Kona is designed for adventure). The car’s raised stance (the Kona has 6.7 inches of ground clearance) already communicates that, though.

What’s Under the Hood: A Small Yet Mighty Turbo

The 2021 Kona is offered with two four-cylinder engines. The first is a 2.0-liter four-cylinder rated at 147 hp and 132 lb-ft of torque. Then there’s the aforementioned 1.6-liter turbocharged four-cylinder, which pushes out 175 horsepower and 195 lb-ft of torque. The 2.0-liter engine is mated to a six-speed automatic transmission, while the turbo is paired with a seven-speed dual-clutch. The Kona EV packs a 64 kWh battery pack that powers an electric motor rated at 201 horsepower.

The turbo is definitely the way to go if performance is what you’re after. Car and Driver took an all-wheel drive Kona with the base engine from 0-to-60 mph in a sluggish 9.2 seconds. As expected, the turbo-four packs a more powerful punch, with Car and Driver making the 0-to-60 sprint in in just 6.6 seconds. For what it’s worth, the Kona EV can do 0-to-60 in just 6.4 seconds.

When it comes to handling, CarBuzz said the Kona “an entertaining little machine to pilot.” That’s thanks to its bend of above-average handling and ride quality. While the outlet praised the Kona’s steering response, it did say that the steering wheel itself felt numb and lacked feedback. In its review, Edmunds offered similar praise for the Kona’s handling. However, they dinged it for the dual-clutch transmission’s performance from a standstill, rough downshifts, and “underwhelming” braking.

The EPA estimates that the 2.0-liter Kona optioned with front-wheel drive will average 28/32/30 mpg (city, hwy, combined). Meanwhile the 1.6-liter turbo that sends power to the front wheels delivers 27/33/30 mpg. Opting for AWD knocks those numbers down just slightly. The AWD 2.0-liter setup returns 25/30/27 mpg and the 1.6-liter turbo checks in at 26/29/27 mpg. Meanwhile, Hyundai estimates that the Kona EV can travel up to 258 miles on a single charge.

What’s Inside: A Basic Cabin That Gets Nice Quick

The 2021 Kona offers seating for five. However, it may be difficult to cram five full-sized adults into it. The Kona isn’t big on standard amenities, but it is available with some sharp optional extras. The highlights include an eight-way power adjustable driver’s seat, heated and ventilated front seats, a sunroof, and automatic climate control. Hyundai keeps things simple when it comes to optional extras, bundling them into the Kona’s various trim levels. Storage space is rated at 19.2 cubic feet with the rear seats folded up and 45.8 feet with them folded down.

The 2021 Kona comes standard with a seven-inch infotainment touchscreen, Apple CarPlay and Android Auto, and a six-speaker sound system. Optional tech includes an eight-inch touchscreen, GPS navigation, a heads-up display, a wireless charging pad, and an upgraded eight-speaker stereo. While the available tech may not sound all that impressive, it does make the Kona plenty competitive in its class.

The 2020 Kona got a five-star safety rating from the National Highway Traffic Safety Administration It was also rated a Top Safety Pick + by the Insurance Institute for Highway Safety. The 2021 Kona is mechanically similar to the 2020 model, which means those ratings should hold when the new model is crash tested.

On the tech front, the Kona comes standard with a few advanced safety features. There’s forward collision-avoidance assist, lane-keep assist, and a driver drowsiness monitor. Optional safety features include blind-spot monitoring, rear cross-traffic alert, rear parking sensors, forward collision-avoidance assist with pedestrian detection, and adaptive cruise control. It would be nice if Hyundai offered more standard safety tech, but what it does offer is pretty impressive. The automaker includes the Kona’s extra safety tech in its higher trim levels too, which is a nice bonus.

Pricing and Trim Levels: Only the EV Breaks the Bank

The next step up the ladder is the SEL trim. It has an MSRP of $22,200 for the FWD version and $23,600 if you opt for AWD. The SEL’s standard features include blind-spot monitoring, a rear cross-traffic collision warning, a proximity key and push-button start, and 17-inch alloy wheels.

Next up is the SEL Plus starts, which is priced at $24,050 in FWD guise and $25,450 for the AWD variant. The SEL Plus features an eight-way power-adjustable driver’s seat, a wireless device charging pad and the upgraded eight-speaker sound system. We suggest you start here, at the least, if you want to truly love your Kona.

If you want the 1.6-liter turbo then you’ll need to step up to the Limited trim. It’s priced at $26,200 or $27,600 depending on whether or not you opt for AWD. In addition to the bigger engine, the Limited also offers 18-inch wheels, leather, full LED headlights and taillights, and automatic climate control.

As its name suggests, the Ultimate is the top trim level on offer. It’s priced accordingly with an MSRP of $28,050 for the FWD variant and $29,450 for the AWD version. The Ultimate offers adaptive cruise control, a forward collision-avoidance system with pedestrian detection, rear parking sensors, and a heads-up display.

Beauty is in the eye of the beholder. To some people, the Hyundai Kona is just plain ugly. We respectfully disagree though. We think Hyundai’s attempt to take a risk with the crossover’s styling has paid off — especially in a segment that’s sometimes known for conservative-looking cars that wouldn’t stand out in a rental lot.

Looks aside, there’s a lot to like about the 2021 Kona. From its attractive pricing to its peppy engine (and the reasonable affordability of the EV model), the Kona checks a lot of boxes. If you’re in the market for a small SUV, the 2021 Hyundai Kona definitely deserves your attention. 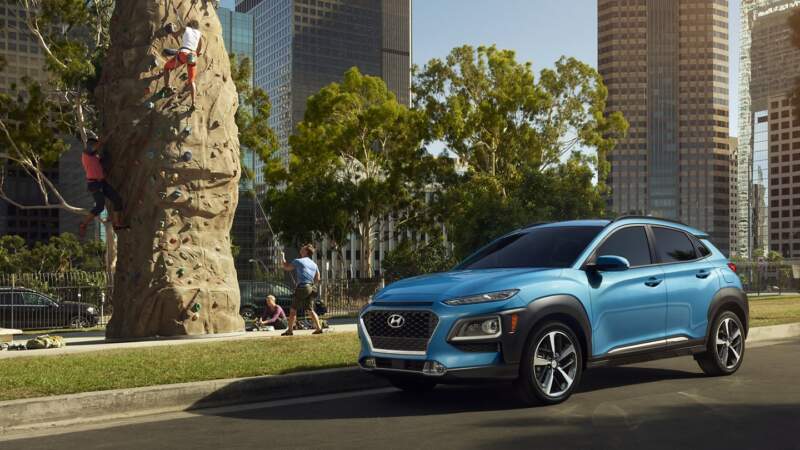