Inside the 2021 GMC Yukon: Is Bigger Always Better?

The GMC Yukon, Chevrolet Tahoe, and Chevy Suburban are triplets by any other name. All boasting similar cargo capacities, seating arrangements, and even engine sizes, it’s hard to pinpoint where the design of one stops and the others begin.

That being said, lets focus on the GMC Yukon. Arguably the fanciest model over the pair of Chevys, the Yukon brings an air of civility to the large vehicle world. With a flair for expensive trim pieces, luxurious interior appointments, and just a bit of engine sass to top it all off, GMC’s big brute commands the high ground with presence.

If you’re looking into a larger vehicle to do whatever it is you do with such a monstrous SUV, the Yukon is your answer. We’ve gathered everything you need to know before hitting up the dealership to test drive one of these puppies. Wait, that’s too cute for a rugged SUV like the Yukon. How does Tibetan Mastiff sound?

Tasked with pushing over 5,000 pounds of metal, plastic, rubber, and leather, the three engine choices offered on the new Yukon certainly have their work cut out. Base models will be equipped with a 5.3-liter V8 powerplant capable of 355 horsepower and 383 lb-ft of torque. Also available will be a 6.2-liter V8 boasting 420 horsepower and 460 lb-ft of torque. Later in the launch, consumers can opt for the 3.0-liter inline-6-cylinder turbodiesel, which is capable of 277 horsepower.

Available in both two-wheel and all-wheel drive, the 2021 Yukon comes standard with a 10-speed automatic transmission. Keep reading to learn more about the new off-road-geared AT4 trim level, which offers enthusiasts even more of a four-wheeling experience.

The 2021 GMC Yukon will be available in the following colors.

There are four trim levels available on this GMC SUV. They are the SLE, SLT, Denali, and AT4. You can also purchase the 2021 Yukon in the Yukon XL format. That version extends the wheelbase by about 14 inches and the overall length around 20 inches. This longer model, previously badged as the “Yukon L,” boasts a best-in-class cargo room of 144.7 cubic feet.

Starting around $50,000, base SLE trims include the ability to choose how many passengers the Yukon can transport. Configurations include a 7-, 8-, or 9-passenger setup. Captain’s chairs are optional in the second row.

Choose the SLT trim for a middle-of-the-road compromise. Featuring a 15-inch diagonal heads-up display, the SLT trim has nine camera views that give the driver a surround-view of the vehicle whenever necessary. Optional readouts on the HUD include speed limit, driving speed, audio, Lane Keep Assist with Lane Departure Warning, Forward Collision Alert and more. You’ll also enjoy the Rear Camera Mirror, which uses a rear-facing camera to display a live feed over the glass of your traditional rearview mirror.

Denali trims are for those looking to add a splash of class to their driving experience. GMC has added “four all-new Denali-exclusive color themes.” Each pairs premium leather with custom embroidery and authentic wood. According to Consumer Reports, the Denali “has a different dash top design, with vents above the integrated infotainment screen, whereas other Yukons have an infotainment screen that stands up from the dash like a tablet, with the vents positioned beneath.” Also available on the SLT, Denali, and AT4 models is the Power Sliding Center Console. Built to store your most valuable items, this powered, safe-like compartment may be more gimmick than entirely useful.

The first-ever AT4 trim level is completely off-road oriented. Upgrades include a Jet Black interior with brushed aluminum accents. Driver and passenger seats are equipped with heat as well as cooling. They feature special edition AT4 stitching on the head rests. Off-road equipment includes a Traction Selection system, 20-inch all-terrain tires, and a four-wheel drive setup with a two-speed transfer case. Skid plates protect all the vulnerable components so you can tackle any terrain while breathing easy.

Also available on the AT4 trim level is an adaptive air suspension system. It will vary the ride height by up to four inches. Add to that the magnetic ride control and you’ve got an off-road-ready SUV with plenty of cargo space to boot.

Consumer Reports names automatic emergency braking, a surround-view camera, the rearview mirror camera, and rear pedestrian alert as available safety features on the 2021 GMC Yukon. It’s not known what further safety features might be available on this new model. Check back with the manufacturer as the arrival date nears for more up-to-date information.

Like many of GMC and Chevy’s larger models, the 2021 GMC Yukon will take advantage of cylinder deactivation technology. Designed to limit the number of cylinders in use during cruising, this technology helps boost fuel efficiency on those long highway drives.

Though information on the new Yukon isn’t available yet, we’d expect them to be similar to the outgoing model’s. The EPA reports those numbers as 14-to-15 city and 21-to-22 highway estimated miles per gallon (MPG) for the 5.3-liter V8. Larger 6.3 liter V8 models will see about 14 city and 22 highway MPG. As far as the turbodiesel goes, GMC reports a combined MPG rating of roughly 25 MPG from the 2020 Chevy Silverado 1500 equipped with this engine. The new Yukon won’t be far from that mark.

We mentioned the Chevy Suburban and Tahoe twins earlier, which are at the forefront of the competitors list for the 2021 GMC Yukon. However, other rivals include upscale models such as the Land Rover Range Rover, Land Rover Discovery, and the Lincoln Navigator. The Ford Expedition closely resembles the GMC Yukon as well. However, it won’t offer nearly the same caliber of refinement when it comes to interior packaging.

One rival in particular, the EV truck developed by Rivian, finds fame in the “Tank Turn.” It’s reported that when the truck is parked on “a low-friction surface, such as snow or gravel, the system jumps into action.” This results in “a sort of donut move” that makes it look as if the truck is rotating in place.

In response to this, GMC has branded its own “Hurricane Turn.” It puts the Yukon into a similar spin “around its central axis.” Whether or not customers will ever find this move useful in their driving experience remains to be seen, but it’s certainly a unique feature.

Impressed by the turbodiesel powertrain the 2021 Yukon shares with the GMC Sierra and Chevrolet Silverado, Kelley Blue Book expects great things to come for the newest generation of the Yukon. But reviewers from Edmunds sum it up pretty well.

“GMC is aiming for a unique blend of luxury, refinement, technology and brawn to appeal to a wide swath of shoppers.”

We think this will serve the brand well, especially as the automotive industry and market moves more towards SUVs and crossovers, leaving traditional family sedans behind.

The 2021 GMC Yukon will arrive at dealerships in the summer of 2020. Check with your local dealership for the most up-to-date information as it becomes available. And as always, check back with us at Autoversed for the latest in all things automotive. 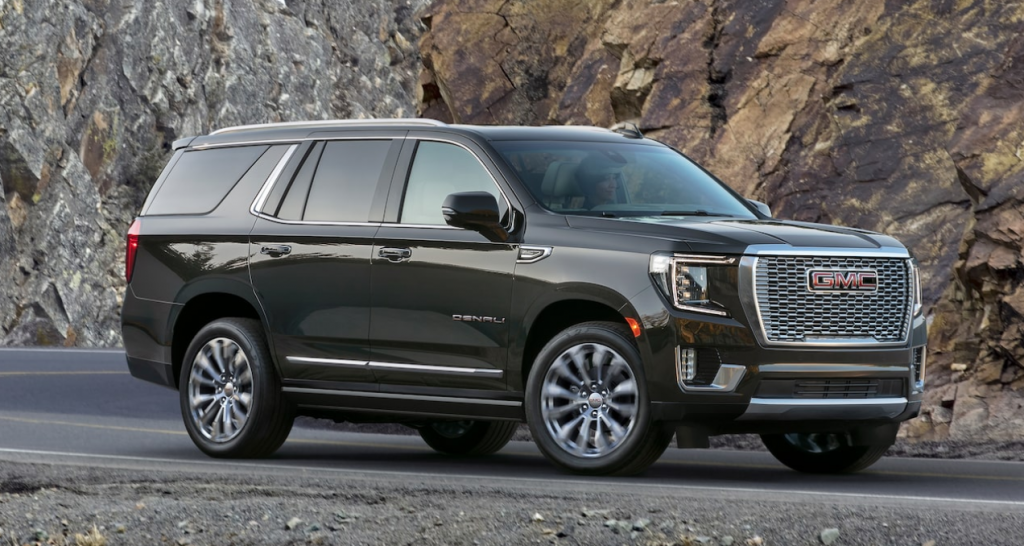