Inside the 2021 Genesis G80: Style Without Compromise

Picture yourself draped in some of the most elegant garments that money can buy. These garments cling to every single one of your body lines with exact contour. They transform you from an average nobody to someone that commands attention. This outfit gives you the poise and confidence you need to conquer the world. You feel almost invincible while wearing them. Now, what if those clothes were boutique quality, but at a thrift store budget? That’s what the all-new 2021 Genesis G80 offers. For those in the market for a new mid-sized luxury sedan, it’s the taste of champagne, but on a beer budget.

To fully understand the new G80, it’s essential to understand its short, yet strong roots. Released in 2017, the initial reaction was a toss-up between re-badged beauty and potential automotive dud. Could something so budget-conscience still bring the promised luxury to the table? The answer quickly became a resounding “yes.” However, was it going to be able to go toe-to-toe with the other seemingly re-badged JDM luxury lines on the marke? Again, a resounding “yes.” And then some. So now we fast forward to the anticipation of the new 2021 Genesis G80. How could they polish an already stunning gem?

For the G80 to stay competitive with the European luxury sedans that Genesis is trying to cunningly swipe sales from, they had to keep it tight. At first glance, the front clip seems like a hybrid between the grille of a Chrysler 300 and the elongated headlamps of the A8. These styling cues might give hints of other models. However, when placed together as a total package, it dishes out a rather handsome face. This front clip appearance also bears a striking resemblance to the G80s big brother, the GV80 SUV.

The side profile of the G80 gives an almost pounce-like stature. Genesis didn’t go over the top with the body lines, however, and kept them to a tasteful minimum. A running parabolic line from the front wheel well to the deck lid harmonizes the greenhouse with the rest of the body. This body line also accentuates the lengthy frame of the G80, giving it a total luxury appearance from the curb. If you ignored the badging, it would be challenging to finger this car as a luxury spawn of Hyundai.

While sitting in the driver’s seat (or any seat, for that matter) the G80 wraps you with an impressive number of comfort options. Drastically different than other luxury cars in the sector, the G80 still provides you with the somatosensory satisfaction that many people crave. Instead of being laden with a complex series of touch screens, Genesis uses only one 14.5″ screen centrally located in the center. Genesis is still keeping some of the technical details under wraps as of now, but there’s no way it could disappoint.

From the comfort and aesthetic aspect, the G80 has some incredibly high-end touches featured in its cabin that screams haughty. If an element isn’t wrapped in leather, it’s trimmed in wood. Or a combination of the two. There’s not one drop of cheap poured into this cabin. It’s a very far cry from its humble roots as a Hyundai offspring. Opulent would be a great adjective to describe the environment of the passenger compartment. However, that word denotes a high price tag. The G80 offers the opulence without the hefty cost.

What good is a charismatic body style without a growling engine to back it up? Among the offering in the G80 includes a 2.5 liter turbo-four cylinder. The choice of a turbo-four isn’t uncommon, with others in the same class opting for similar engines. Both BMW and Mercedes adopted the idea of using powerfully small engines, without complaint. So why shouldn’t Genesis? The compact four-cylinder can still harness 290 ponies with 310 foot-pounds of torque. The G80 will have no problem getting out of the way of anything that might cross its path.

Also available is the 3.5-liter V6, for those that aren’t entirely sold on the turbo concept. What’s referred to as the Hyundai Lambda engine is all-aluminum, lightweight blocks complete with a timing chain. Lofty promises of this engine include somewhere in the ballpark of 370 horsepower. To further amplify the performance of both of these engines, an all-wheel-drive option will be available. The standard model will strictly produce power for the rear-wheels, though.

The G80 hasn’t been on any broad-spectrum test-drives for review’s sake, but one thing is certiain — it won’t disappoint. The first iteration of the G80 left reviewers a little numb to the experience, wanting just a little more connectivity with the drivetrain. Incrementally, Genesis has worked and enhanced the driver’s ability to fully appreciate the cocky nature of the sprightly engine.

The brutal honest nature of the G80 isn’t just the price point or performance. It’s fighting the David and Goliath-like battle of the badge. Drivers have become brainwashed into thinking that bestowing the title of a luxury vehicle is only suitable for European sedans. Being branded with anything else creates a hard battle for notoriety. Oozing from every orifice of the G80 is opulence. Sadly, many will still look the other way. It’s not a Beamer, Benz, or Audi, so it’s just a rebadged Hyundai, right?

Even if it was just a rebadged Hyundai (it’s not), you’ll have to ask yourself why that trips you up? The G80 has the backing of one of the best warranties on the market, so being left with a hunk of junk isn’t an option. Performance and safety have already been established, with previous G80’s receiving an almost five-star NAFTA rating. So what could it be? Pretentiousness? Can the general public be so incredibly jaded by the early days of Hyundai that they won’t even give the G80 a chance?

As for exact pricing, Genesis hasn’t revealed the details yet. The 2020 version of the G80 startes at $42,550 for the base model and up to $57,500 for the top-of-the-line trim. That’s before any optional add-ons, too. You can expect the 2021 version to fall into a similar, although probably slightly more expensive, range. Still, that’s excellent value for a luxury sedan that compares favorably to the traditional imports.

Do you remember the episode of The Brady Bunch when the middle sister, Jan, was feeling neglected because everyone was giving attention to her big sister Marsha? Jan was just as saintly as Marsha, but no one noticed. She developed a nice little personality crisis. Put the G80 in the shoes of Jan. The popularity bestowed on other (potentially overpriced) European luxury sedans could easily be shared with the G80. Yet it remains overlooked. It can’t possibly be because it’s not pretty enough. After all, it’s gorgeous. It can’t be because it’s unreliable and flaky. After all, it’s not. So what is it then? Is it the badge and branding that makes or breaks this line? Only time will tell. 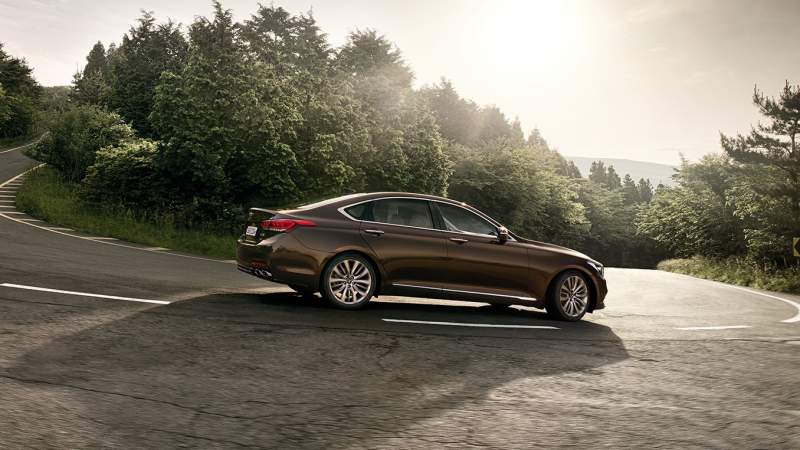 Nikki cut her teeth in the automotive world at a very young age by helping her dad build various projects cars from the ground up. That passion has followed her into adulthood, where she gawks longingly at cool vehicles on the internet. She spent a good chunk of time being a BMW groupy but has diversified her automotive portfolio drastically. Currently, she resides in the high desert of Arizona and drives a very exercised '77 Dodge Tradesman van.