The Bentley Bentayga received a mixed reaction when it debuted a few years ago. However, even those who disliked the idea of an ultra-luxury SUV that costs more than some houses cannot deny that the Bentayga excels at being what it was meant to be. That is, a super-exclusive, ultra-luxurious performance SUV that can go anywhere and do anything. Sure, its appearance isn’t for everyone. Then again, Bentleys aren’t exactly meant for everyone, are they? The Bentayga sets a high bar for luxury and refinement in the SUV segment. Going one step further, Bentley also claims that the Bentayga Speed is the world’s fastest SUV. The jury is still out on that particular claim — but it’s certainly damn close!

The new 2021 Bentley Bentayga is a significant improvement over the 2020 model, with subtle yet significant styling updates. The Bentayga is Bentley’s bestselling model, and with good reason. It more then holds its own against formidable rivals like the Rolls-Royce Cullinan, Mercedes-Maybach GLS, and Lamborghini Urus.

The 2021 Bentayga now features Bentley’s modern design language. That makes it look like much less of an outlier in the automaker’s luxury lineup. The old model was definitely starting to show its age. Now, the exterior styling updates give it a cleaner and sleeker look. The interior has also been revised, offering a larger center infotainment display and more rear legroom.

The Bentayga’s new front end more resembles the Continental GT’s. It features clean and dynamic lines, plus the new matrix beam adaptive headlights (made of cut crystal and filled with LEDs). There’s also a wider, more upright grille, and its “B” badge is now placed on top of the hood. The sides feature straight, pronounced lines and bulging front and rear fenders. Combined, they give the Bentayga a sporty and athletic stance. There’s also a larger wing vent and new standard 22-inch alloy wheels. In the rear, the new Bentayga sports oval, full LED tail lights instead of the B-shaped LED tail lights of the prior model.

The new elongated rear spoiler, sporty rear bumper, and quad exhaust tips make the Bentayga look more like a sporty GT car than an SUV. Opting for the Speed model brings trim-exclusive dark tint head and taillights, body-colored elements, and an exclusive new spoiler. Also worth noting is that this SUV can be had in up to 57 different colors. That’s a lot of choice!

What’s Under the Hood: From a Hybrid to a W12

The new Bentayga offers potent performance in three distinct flavors. The Bentayga Hybrid may be the least powerful but it’s certainly no slouch. It can go from 0-to-60 mph in a brisk 5.2 seconds. Its hybrid setup pairs a 3.0-liter twin-scroll turbocharged V6 gasoline engine with an electric motor. The combined output comes to an impressive 443 hp 516 lb-ft. of torque. In addition to performance, you also get a combined fuel economy of 46 MPGe. It has an EV driving range of 31 miles when the hybrid system’s 17.3-kWh lithium battery is topped off.

Next up in the power rankings is the Bentayga V8. It comes equipped with a 4.0-liter twin-turbocharged V8 gasoline engine that cranks out 542 hp and 568 lb-ft. of torque. This model will sprint from 0-to-60 in just 4.4 seconds. This model delivers a combined fuel economy of 21.2 mpg. The range-topping Bentayga Speed is the quickest, with a 0-to-60 time of 3.8 seconds. It packs a massive 6.0-liter W12 gasoline engine that generates 626 hp and 664 lb-ft. of torque. All three powertrains are paired with an eight-speed automatic transmission that sends power to all four wheels.

Aside from speed, the Bentayga also offers top-notch ride handling and ride quality. It comes standard with a self-leveling air suspension system that continuously adjusts damping depending on the driving conditions. It works wonders to iron out any road imperfections. The 2021 Bentayga can also be had with 48V electric active anti-roll bars. These front and rear anti-roll bars each have electric motors that apply force to pull the SUV down on the outer side when cornering to eliminate body roll and keep the SUV flat.

What’s Inside: A Cabin Worthy of Royalty

The new Bentayga offers handsome styling, excellent fit and finish, solid build quality, and superior interior materials. In true Bentley fashion, the new dashboard design blends old-school physical dials and controls with high-resolution displays. The cabin also gets shiny metallic trim on the door handles, vents, and center console dials. There’s polished wood inlays on the dashboard and doors. And finally, plenty of rich leather throughout. The clock and vents that sit on top of the center display also have a new design that is quite exquisite. The steering wheel gets a new look as well, one that places all the stitching on its inner surfaces.

This Bentayga looks especially luxurious when optioned with the Mulliner Design Specification. That adds handcrafted diamond quilting to the seats and doors. There’s also the First Edition specification that also gets diamond quilted seats and “First Edition” badging throughout the cabin. Speaking of seats, the Bentayga’s rear row is designed to be as comfortable as possible with standard ventilation. They also have an exceptional amount of room to recline. The cockpit is exceptionally quiet thanks to the fact that it incorporates tons of sound-deadening materials. In addition, the windshield and windows have been double-glazed to shut out road and wind noise more effectively.

The new Bentayga is available with four, five, or seven seats. Second-row passengers now have an additional four inches of legroom, but this does come at a cost to storage space. The Bentayga offers just 17.1 cubic feet of cargo space with the rear seats folded up. That expands to 62.6 cubic feet with the seats folded.

The 2021 Bentayga comes with a 10.9-inch touchscreen infotainment system. This display is bigger and brighter than the previous models. It also adds an anti-glare and anti-reflection coating that makes it easier to see when the sun is shining bright. Bentley has finally gotten with the times and now offers Apple CarPlay and Android Auto connectivity along with USB-C ports. The Bentayga’s navigation system has also been updated. It now provides satellite maps and a three-dimensional building display. There is an active heads-up display that projects real-time driving information, turn-by-turn navigation, and other selected parameters onto the driver’s line of sight.

But wait, there’s more! The new Bentayga also offers the “My Bentley” connected car service. It’s delivered via an embedded SIM card instead of through the driver’s smartphone. My Bentley features real time traffic updates, over-the-air map updates for the navigation system, online music, local hazard information, and even green light predictions. This service also offers remote services via the My Bentley smartphone app, including the ability to start the engine or lock the doors from a remote location.

The Bentayga is, however, a bit disappointing on the safety and driver’s assistance front. Only automated emergency braking with pedestrian detection comes standard. Additional safety tech is available, including a night-vision system, adaptive cruise control, and a lane-departure warning with lane-keep assist. Unfortunately, it does feel a bit like the automaker is nickel-and-diming drivers for these options, given the Bentayga’s massive price tag.

According to MotorTrend, the 2021 Bentayga Hybrid will be priced at $183,225, while the V8 model will start at a slightly lower price of $177,000. The range-topping Bentayga Speed, as expected, commands a significant premium over the other two and is expected to start at approximately $245,000. We said at the start of this article that Bentleys aren’t for everyone. The quarter-million dollar price tag is certainly one of the main reasons for that.

If you’re considering the new Bentayga, you’re probably also looking at the Rolls-Royce Cullinan, Mercedes-Maybach GLS, or Lamborghini Urus. The Cullinan and the Maybach GLS prioritize luxury and refinement. Meanwhile the Urus appeals more to SUV buyers who want serious performance. The Bentayga offers that sweet spot between luxury and performance. That’s why it’s still arguably the top option in this (admittedly niche) segment. Plus who wouldn’t love to brag about their brand new Bentley to their friends? There’s a whole lot of status built into this luxury car brand. 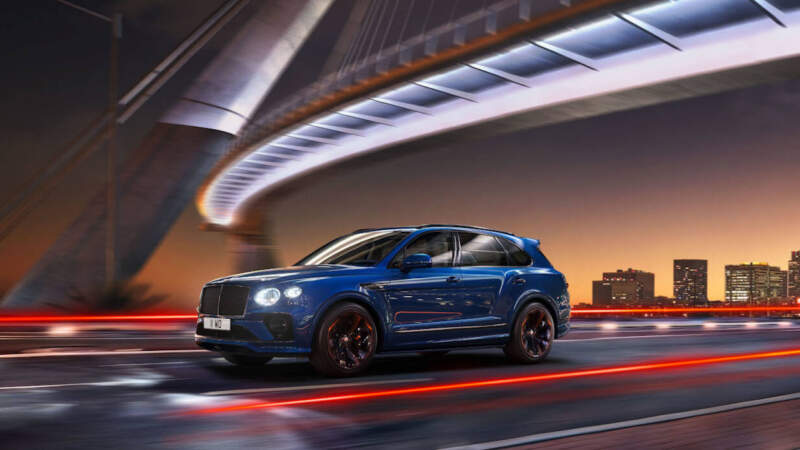