Inside the 2021 Aston Martin DBX: An SUV Worthy of James Bond

The 2021 Aston Martin DBX is the first SUV ever made by the renowned British automaker in its 107 years of operation. While Aston Martin is best-known for producing cars worthy of fictional super spy James Bond, it was almost inevitable that the company would produce a more family friendly model. Porsche started making SUVs more than a decade ago. Other luxury brands like Bentley, Rolls-Royce and even Lamborghini all offer SUVs now.

Like a true Aston Martin, the DBX boasts elegant yet sporty styling. It drives with agility and grace. Most importantly, it delivers outstanding performance from a refined and well put-together twin-turbocharged V8. Amazingly, the DBX is reportedly even a competent off-roader and can tow some actual weight. The first DBX model rolled off the assembly line in July of 2020. Aston Martin has declared that it will be able to produce up to 5,000 models per year, to start. If you’re considering placing an order, or just want to know what the DBX is all about, just keep reading.

The 2021 DBX remains mostly unchanged from 2020. But amazingly, it is cheaper. This is thanks to the fact that the company’s leadership changed hands in August 2020. According to Roadshow, new Aston Martin CEO Tobias Moers wanted to standardize the cost of the DBX across all global markets. Initially, the DBX was priced at $192,986. However, now the 2021 model will cost $179,986. That’s 13,000 less than the initial price, which is a decent discount for anyone.

There’s no mistaking the 2021 DBX as anything other than an Aston Martin. It shows off the brand’s latest design language just as well as the likes of the DBS Superleggera and the Vantage. The frontend is highlighted by a massive grille, muscular hood, and sophisticated (yet sporty) LED headlights. While daytime LEDs are nothing new, the DBX positions them uniquely around the air vents on both ends of the front fascia. That gives this SUV an unmistakable presence in the dark. On the sides, the 2021 DBX blends sharp, chiseled lines with sweeping curves and beefy fenders.

It also has standard attention-grabbing 22-inch alloy wheels and front fender vents that aid aerodynamics while adding a touch of sportiness. The 2021 DBX’s rear is arguably its most appealing side. A ducktail spoiler integrates the SUV’s taillight bar. Finally, there’s a blacked-out, aggressive rear bumper with a beefy dual-exhaust. In summary, the DBX is gorgeous.

Under the Hood: An AMG-Sourced V8

The 2021 DBX comes equipped with major power. The engine is a slightly more potent version of the hand-built Mercedes-AMG sourced V8 powerplant that powers the DB11 and Vantage. The improved twin-turbocharged 4.0-liter V8 makes 542 horsepower and 516 lb-ft of torque. That power is paired to a refined and highly responsive nine-speed torque-convertor automatic transmission.

According to Aston Martin, the 2021 DBX requires 4.3 seconds to sprint from 0-to-60 mph and has a top speed of 181 mph. However, CarAndDriver recorded an eve faster 3.8-second 0-to-60 time in their testing. That’s incredibly impressive sprint for an SUV that weighs 4,949 pounds. Along with burning rubber, the DBX can also tow up to 5,940 pounds. You can even do some off-roading, thanks to its hill descent control system and an adjustable suspension that can raise the maximum ride height by 1.7 inches. Whether you want to take your nearly $200,000 SUV into the gravel and mud is another conversation altogether, though.

The EPA rates the 2021 DBX at 14 mpg in the city, 18 mpg on the highway, and 15 mpg combined. However, in its long-term test, CarAndDriver found that the SUV did worse in real-world conditions. They estimate that the average combined fuel economy was 12.6 mpg on over 340 miles. That’s pretty poor compared to some other SUVs. However, those other SUVS aren’t the 5,000-pound DBX. Nor are they powered by a massive V8 engine. When you factor in those elements, the DBX fuel economy looks more on par.

What’s Inside: A Spacious and Thoughtfully Designed Cabin

As expected, the 2021 DBX is just as appealing on the inside as it is on the outside. Almost every surface in the cabin is trimmed with full-grain Caithness leather (which is named after a historic county in Scotland). The plush leather is complemented by Alcantara headlining, piano black wood veneer trim on the center console, and satin chrome “brightware” on the door handles, steering wheel, paddle shifters and center console.

Surprisingly the DBX is as practical as it is stylish. The SUV can hold up to 22.3 cubic feet of cargo with the second row of seats up. That more than doubles to 54 cubic feet when they’re folded down. In its review of the DBX, British automotive outlet CAR noted that six-footers can comfortably fit in both rows at the same time.

The 2021 DBX doesn’t disappoint in the technology department. It has a standard configurable 12.3-inch TFT information screen that displays driving data using vivid graphics and illustrations. There is also a 10.25-inch infotainment screen that is operated not by touch but via a center console-mounted rotary knob. The infotainment system is Apple CarPlay-compatible, although Android Auto isn’t available. Sorry, Google fans. Navigation is standard, along with an 800-watt 14-speaker premium audio system.

Lane departure warning and lane-keep assist system, as well as rear cross-traffic alert, traffic sign recognition, blind-spot monitoring, and a door opening warning system round out the impressive list of standard safety and driver assistance tech. It’s a full safety package that many non-luxury brands charge extra for. It’s a nice bonus that Aston Martin throws it all in without asking for more money.

Currently, the 2021 DBX is only available in a single, well-equipped trim level. However, it can be had with several optional packages. For example, the convenience package adds a power liftgate, parking assist, and Homelink wireless control. The indulgence package adds the 16-way adjustable front seats and acoustic privacy glass to the rear windows. You can also tinker with adding chrome, tow packages, a sport exhaust, colored brake calipers, and a variety of stylish alloy wheels.

There are, however, rumors of another DBX model in the future. It would be a three-row and a high-performance AMR version. This seven-seater model of the DBX could be added to the lineup in the near future. As previously mentioned, the 2021 DBX starts at $179,986. If the larger version does become a reality, you can expect it would cost a bit more.

In an era when most top luxury automakers are shifting focus to electric vehicles, the 2021 DBX is a reminder that there is still a place for fire-breathing twin-turbocharged V8 SUVs. The 2021 DBX successfully delivers on its stated purpose, which, as Aston Martin puts it, is to be “an SUV with the soul of a sports car.”

The Bentley Bentayga and the Mercedes-Maybach GLS both feature similar engine setups. You can also argue they offer more standard kit and feel more luxurious. However, they can’t match the DBX’s sporty character. Those with deep pockets who are looking for a mid-size luxury SUV with sharp and engaging driving dynamics should definitely check out the 2021 Aston Martin DBX. Embrace your inner 007. 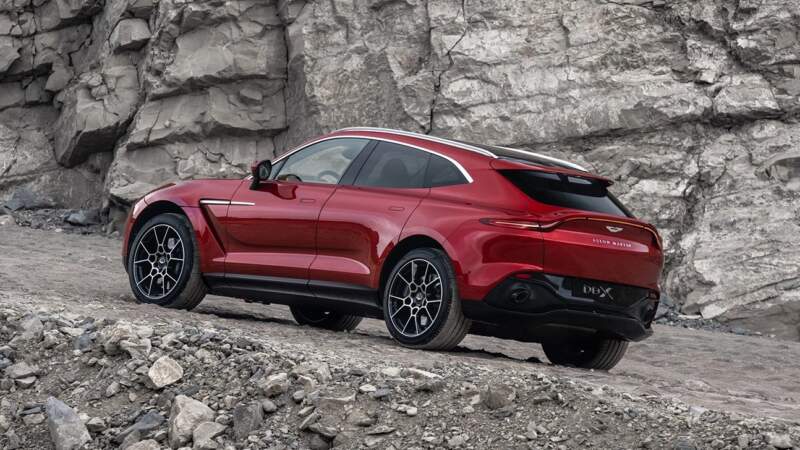