Inside the 2021 Acura TLX: A Luxury Sedan With A More Moderate Price

Acura might be best known for its supercar-like NSX. It was a model ahead of its time when it first came out in the 90s. It remains a favorite among speed enthusiasts today. However, those NSX fans without $150,000 to spend on a new car shouldn’t dismiss the 2021 Acura TLX. For much less money, Acura’s highly capable performance sedan makes even grocery-getting fun. That is, if you don’t have them delivered straight to your front door these days.

Carefully blending sportiness with versatility, the 2021 TLX exudes a cultured sense of luxury. Technically, Acura is in fact Honda’s luxury counterpart. Just like Lexus is for Toyota. However, we think there’s more reasons to check out the 2021 TLX than merely refinement and sophistication.

Below, you’ll find plenty of reasons why the 2021 TLX could be your next purchase. In the comparison section, we’ll let you know what you can expect from both a new TLX and the vast array of competitors vying for your purchase. Which one will you choose?

Acura fits the 2021 TLX with one of two engine choices. There’s the 2.0-liter turbocharged four-cylinder base version or a 3.0-liter twin-scroll turbocharged V6. Both are mated to a ten-speed automatic transmission that comes front-wheel drive standard. The smaller of the two engines puts out 272 horsepower and 280 lb-ft of torque. Meanwhile the V6 reportedly harnesses 355 horsepower and 354 lb-ft of torque. All-wheel drive is still an option for those looking for more traction in harsher climates.

Acura curated the following colors for the 2021 TLX. Which is your favorite?

Details on specific trim levels are still a bit fuzzy at this point. We don’t expect a huge shift from the 2020 model, though. It featured a base model, an upgraded A-Spec version, and two extra packages — Technology and Advance — that added features. The real exciting news, though, is a new Type S model. Here’s what review sites are relaying thus far.

Base model TLXs will feature the same 2.0-liter engine found in the RDX. This model rides on 18-inch wheels and includes Apple CarPlay and Android Auto connectivity. The infotainment system consists of a 10.2-inch screen that isn’t technically a touchscreen. Rather, you navigate through it via a touchpad controller. There are four available driving modes: Comfort, Normal, Sport, and Individual. This cheapest version of the TLX is reported to start at around $38,000 when it hits dealer showrooms.

Choose the A-Spec model for more dynamic body lines around the exterior of the vehicle. There are plenty of gloss black accents to attract dust. A rear spoiler and 19-inch wheels lets you (and every other driver on the road) know the Acura TLX means business. There are plenty of speakers to go around, so you can be sure everyone will know of your presence. The A-Spec version of the TLX should start at around $41,000 (without any extras).

Top-of-the-line Type S models receive both the powerful V6 engine and all-wheel drive. According to Acura, the “Type S is the next chapter of our rich performance-driven heritage.” This version will be arriving in the spring of 2021. Quad exhaust tips announce the presence of the sporty sedan, while a front splitter and rear diffuser direct air artfully around this performance-oriented vehicle. Did we mention the chrome trim is blacked out for a sleek, stealth look as well? An official price hasn’t been revealed, but we expect the number to be a bit north of $50,000 for the TLX Type-S.

The 2021 Acura TLX has not yet been rated by either the National Highway Traffic Safety Administration (NHTSA) or the Insurance Institute for Highway Safety (IIHS).

However, Acura did address what driver assistance technology will be available on the newest TLX. Consumer Reports says you’ll see technologies like “forward collision warning, automatic emergency braking with pedestrian detection, lane departure warning, and lane keeping assistance, which are part of the brand’s AcuraWatch suite of safety and driver assist systems.” These will be standard on all 2021 TLX models.

As with safety ratings, there’s still no official fuel economy rating on the 2021 TLX. However, experts at Car and Driver fully expect “the four-cylinder version to be thriftier than the V6 option, and adding all-wheel drive to the mix will probably slightly reduce fuel savings.” This is typical with any model, since having a smaller engine often means higher efficiency. Pushing four wheels rather than just two makes the engine work harder too, thus consuming more fuel.

If we look back at the 2020 TLX, fuel efficiency numbers won’t match up directly with the newest model. That’s because both engine options have actually shrunk in displacement. That said, we expect to see around 20 miles per gallon in the city and at least 30 MPG on the highway. Extra points might be eaten up by those turbochargers, though. Regardless, the 2021 TLX should keep up with the pack when it comes to towing the line at the pump.

Though the 2021 TLX may have a new spring in its step, the same models join it on the market as have before. The Kia Stinger is one of those at the forefront, with the Tesla Model 3, Genesis G70, and Alfa Romeo Giulia right behind. The TLX does rises above some humbler sedans, such as the Honda Accord and Toyota Camry. However, the increase in style obviously comes a price hike.

That puts the 2021 TLX into territory the Germans have typically occupied. There’s the Audi A4 and A6 (along with the S4 and S6) and the BMW 3 and 5 Series. Let’s not forget the Mercedes-Benz C-Class either. The luxury sedan list continues, with such entries as the Infiniti Q50, the Lexus IS, the Cadillac CT5, and Volvo’s S60. Suffice it to say, the TLX enters into a beauty pageant filled with flair, grace, and of course, sex appeal.

Why Choose the TLX?

So what makes the 2021 TLX stand out? Well, CNET experts called the interior of the new sedan “a nice place to be, with an attractive dash design and quality materials like lots of soft-touch surfaces and open-pore wood trim.” Edmunds noted “the infotainment trace pad is placed right where your right hand naturally rests.” It’s clear that Acura spent time to ensure a memorable and pleasant experience within the car.

Spend a few minutes gazing at the exterior, and you might not notice a key design element at first glance. Most manufacturers place the door handles of passenger cars equilaterally across both sides of the vehicle. Not only do the door handles on the TLX sit at different heights, but the rear handles are even rotated slightly. This allows them to flow with the dominating character line, rather than interrupt it.

Some of the complaints about the 2021 TLX include frustration with the infotainment system. That trace pad “requires some getting used to,” says Kelly Blue Book. The rear headroom also won’t favor anyone who towers north of average height. However, for a luxury sport sedan that shares some of the same underpinnings as the coveted NSX, the TLX does its best to hold ground for Acura in the fiercely competitive sedan segment.

Acura presents a potent blend of sportiness and luxury in the 2021 TLX. It’s faster than your average family sedan but cheaper than a high performance sports car. The TLX might be the sweet spot you’re looking for between behaving yourself and going all-out. Spend some time with the new TLX at your local dealership and see for yourself just how refined this hardly-tame sedan really is. You might just have to take one home. 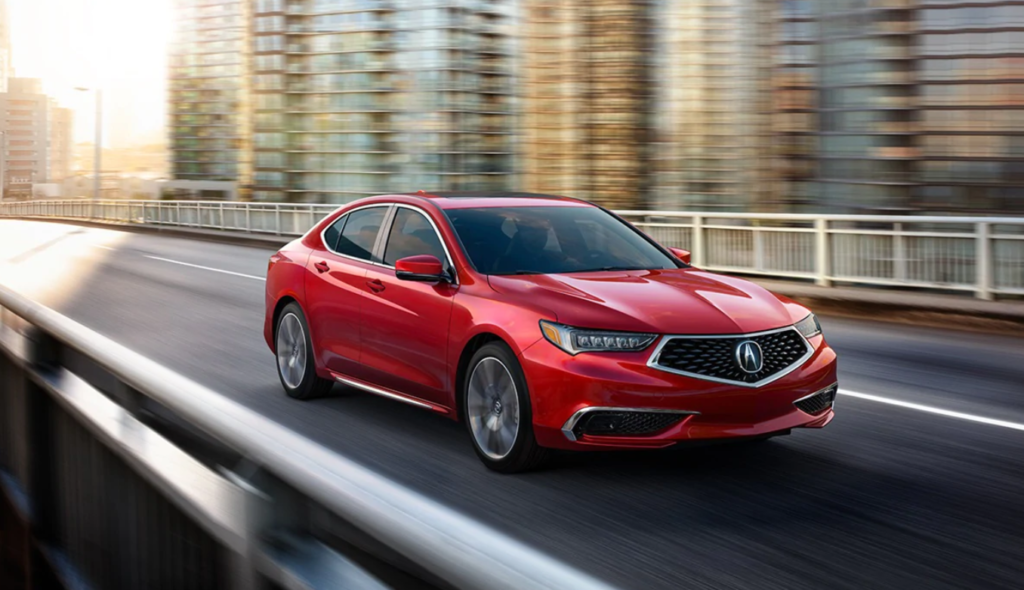