Inside the 2020 Subaru Legacy

It may not look like it, but the Subaru Legacy is all-new for 2020. The staid mid-size sedan was given a little more pep under the hood, extra tech, and a more luxurious cabin. These additions make the Legacy even more attractive if you place practicality and value above all else. The all-new design should be enough to help Subaru cut through the noise in the ultra-crowded mid-size sedan segment.

Like we just mentioned, the Legacy was completely redesigned for 2020. More specifically, it now sits on an all-new platform that the automaker claims is 70 percent stiffer in torsional and front-suspension rigidity and front lateral flexural and rear subframe rigidity. Translation for normal people? The new Legacy should handle much better than the outgoing model. In addition to the new platform, the 2020 Legacy also boasts a new, more powerful engine option and a new, larger infotainment touchscreen.

Exterior Styling: For Those Who’d Rather Blend In

The Mazda 6 proves that budget-friendly cars can look elegant. The Honda Accord and Toyota Camry are both designed to stand out after decades of blending in. Then there’s the Subaru Legacy. The Legacy isn’t ugly by any means. How it is a bit uninspiring, especially the base trim. The Sport trim looks a bit more aggressive at least, with black 18-inch alloy wheels. The dual exhaust on the XT trims also gives the Legacy some much-needed cool points. “Pedestrian” and “inoffensive” are the two words we’d use to describe the look of the 2020 Legacy.

What’s Under the Hood: A New Turbocharged Engine

You should opt for the turbocharged engine if you want to have some fun behind the wheel of your Legacy. The base engine makes the sprint from 0-to-60 mph in a sluggish 8.5 seconds. However, the turbo covers that same distance in just 6.1 seconds. Regardless of the engine, though, the Legacy won’t offer the same driving experience as the Mazda 6 or Honda Accord.

In their review, Car and Driver noted that the 2020 Legacy is “out of its element at heightened speeds on challenging roads.” They added that it “lacks the crisp steering and overall agility of the Honda Accord.” Ouch. That said, U.S. News reviewers said that the Legacy is capable of keeping its composure through the curves and that its suspension can soak up most road imperfections.

According to the EPA, the 2020 Legacy with the 2.5-liter engine averages 27/35/30 mpg (city, highway, combined). The more powerful turbo model posts a split of 24/32/27 mpg. In their track testing, CarandDriver recorded a highway average of 34 mpg for both engine options. That makes opting for the turbo engine more of a no-brainer.

What’s Inside: A Comfy Cabin and Generous Standard Safety Features

The Legacy is not exactly a sexy car. However, its traditional design does bring some benefits, specifically with regard to cabin space. The Legacy has seating for five, and the seats are comfortable according to automotive writers. Both rows offer a good amount of legroom and headroom. The Legacy’s spaciousness extends to the trunk, which offers 15.1 cubic feet of cargo space standard. That doesn’t lead the class, but it’s not back of the pack either. Even more cargo space is available with the rear seats folded down.

In terms of luxury, the base Legacy isn’t much to write home about. Its standard features include cloth seating, a six-way manually adjustable driver’s seat, and auto on/off headlights. Optional luxury extras include dual-zone climate control, a moonroof, Nappa leather-trimmed upholstery, heated and ventilated front seats, heated rear seats, a heated steering wheel and a leather-wrapped shifter and steering wheel. MotorTrend commented in their review that the Legacy’s leather was upscale and “sumptuous for the class.”

A seven-inch infotainment touchscreen and Apple CarPlay/Android Auto come standard. The available tech includes an 11.6-inch infotainment touchscreen, GPS navigation, a wireless charger, 12-speaker Harman Kardon sound system, and a 4G LTE WiFi hotspot. It’s worth noting that the massive touchscreen comes standard on all models except for the entry trim level. What’s also worth noting are the frustrations reviewers have expressed with the infotainment center. Edmunds reported that the system crashed numerous times during its testing. Hopefully a software update irons out the bugs.

Subaru’s EyeSight suite of safety tech is standard on all models. It includes adaptive cruise control with lane centering, lane-keep assist, pre-collision braking, and pre-collision throttle management (which eases off the gas if the Legacy detects a crash is imminent). Additional available safety features include blind-spot monitoring with rear cross-traffic alert, reverse automatic braking, and a 180-degree front-view monitor. The Legacy doesn’t offer the most standard safety tech. However, they don’t charge an arm and a leg for it either. Instead, they choose to bundle additional features with higher trim levels.

The Legacy Premium is the next step up the ladder and has an price of $24,995. Its standard features include a ten-way adjustable power front seat, heated front seats, and a leather-wrapped steering wheel and shifter.

Despite its name, the Legacy Sport does not come standard with the available 260-horsepower turbocharged engine. However, it does feature 18-inch alloy wheels, LED fog lights, a spoiler, and adds red contrast stitching to the cloth upholstery. The Legacy Sport checks in at $26,945.

The last Legacy you can buy for under $30,000 is the Legacy Limited, which starts at $29,745. The Legacy Limited adds leather-trimmed upholstery, heated rear seats, and steering-responsive headlights to the mix.

Subaru doesn’t charge a premium for safety tech or luxury features, but it does put a high asking price on the Legacy’s available turbocharged engine. If you who want a bit more grunt, you’ll have to pony up at least $34,195 for the Legacy Limited XT. In addition to a more powerful engine, the Limited XT also comes with a moonroof, dual exhaust, and heated steering wheel.

At the top of the totem pole sits the Legacy Touring XT, which has an starting price of $35,895. That money buys the more powerful engine, along with Nappa leather-trimmed upholstery, a 180-degree front-view camera, and ventilated front seats.

The 2020 Subaru Legacy is a hard car to get excited about, but that doesn’t mean it’s a bad one. In fact, the Legacy is probably one of the most rational models available in the affordable mid-size sedan segment. The attractive pricing of its trim levels and their standard features, along with the fact that each model comes with AWD, make it hard to beat in a direct comparison — especially for consumers who value safety and comfort more than performance and looks. If you’re in the market for a mid-size sedan and think more with your head than your heart, the 2020 Subaru Legacy is definitely worth a test drive. 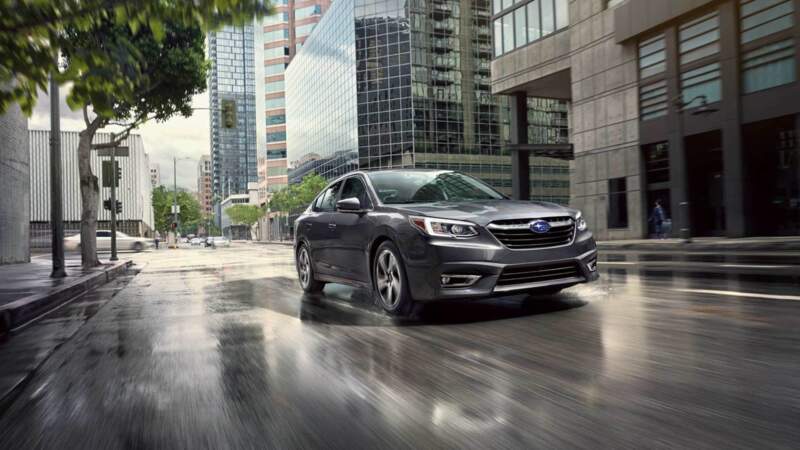