With the 2020 Forester, Subaru continues the delicate balancing act between adventure and practicality when it comes to their flagship SUV. With ample cargo space and four-wheel drive capability, the newest Forester is likely to continue to appeal to a variety of drivers. Especially if you admire its rugged handling and down-to-earth sensibility.

With its four-cylinder engine, variable automatic transmission, and standard all-wheel drive, there are few compact SUVs as perfectly cast for weekend warriors than the Forester. Here is a look inside the 2020 Subaru Forester and everything that it has to offer.

Not a lot has changed for the 2020 model.  Perhaps that was expected, given that the SUV was all-new in 2019. The exterior, in particular, has been largely left the same. With the exception of a new LED lamp that illuminates the license plate, you’d be hard pressed to find any changes to the outside appearance.

It’s worth noting that premium Forester models now come standard with the contents of last year’s “All-Weather” package. That includes heated exterior mirrors, heated front seats, and a windshield wiper de-icer. However, in terms of appearance, the 2020 Forester looks much the same. Not that that’s a bad thing, though. It still sports the rugged good looks and elevated under carriage that fans of this SUV already love.

When it comes to engines, Subaru has taken a “one size fits all” approach. Literally. Every Forester model is powered by the same 2.5-liter flat-four-cylinder engine. It produces 182 horsepower and can tow 1,500 pounds. A continuously variable automatic transmission routes the engine’s power to Subaru’s trademark all-wheel-drive system.

During road tests, the 2020 Subaru took 8.5 seconds to hit 60 MPH. That acceleration isn’t going to set the automotive world on fire, but it’s more than sufficient for most buyers. If you want greater acceleration, check out the Honda CR-V or the turbocharged versions of the Mazda CX-5 and Kia Sportage. Where the Forester really shines, though, is with its handling. It’s excellent over rough roads, gravel, and uneven terrain. On top of that, the Forester’s steering is accurate and the brakes have been praised for their responsiveness, especially during emergency stops.

While the Limited and Touring trims come with the most bells and whistles, the Premium model offers a good mix of both value and features. The exterior upgrades in the Premium model include 17-inch wheels, a rear spoiler, and body-color sideview mirrors. There’s also a panoramic sunroof, a 10-way power-adjustable driver’s seat, reclining rear seats, an onboard WiFi hotspot, and a six-speaker sound system.

The interior of the Forester remains practical, if not somewhat sparse. The cabin is straight-forward and fairly basic. Again, that’s not necessarily a knock on the car. The driving position is very good and provides great visibility. Leather trim, chrome, and matte-metallic accents give the look and feel of high quality. Probably the best feature of the Subaru’s interior is its spaciousness.

The back seat is quite large, as there is no third-row option. Even adults should find the bench seat comfortable. Subaru claims ten full size pieces of luggage can fit in the cargo area behind the back seat, with even more possible once the it’s folded down. With all of its cargo space, the 2020 Forester is sure to appeal to parents with large families, or those fond of road trips.

Subaru is known for having responsive and reliable technology. That trend certainly continues with the 2020 Forester. All Forester models come standard with a touchscreen infotainment system that employs Subaru’s Starlink interface. The Base, Premium, and Sport models come standard with a 6.5-inch display. However, a larger eight-inch unit is available on the Sport and comes standard on the Limited and Touring editions.

Two USB ports are provided for front-seat passengers. Two more are optional and reside on the back of the center console. Navigation is available only on the Limited and Touring models. However, if you decide to stick with a lower model, Apple CarPlay and Android Auto capability are both standard. They can provide turn-by-turn directions broadcast from your smartphone. Onboard WiFi via a 4G LTE data connection is standard on all but the base Forester.

As for safety, the 2020 Forester has been awarded a five-star rating from the National Highway Traffic Safety Administration and a Top Safety Pick designation from the Insurance Institute for Highway Safety. All models come standard with Subaru’s EyeSight suite of camera-based driver-assistance features. Other safety features include standard automated emergency braking, adaptive cruise control, and lane-departure warning with lane-keeping assist. Subaru has a long reputation for safe vehicles, and the 2020 Forester fits right in.

The Forester’s warranty is pretty basic. In fact, it’s not quite as good as many of its competitors. Rivals such as the Sportage and the Hyundai Tucson each offer a 10-year, 100,000-mile powertrain warranty, while the Toyota RAV4 provides two years of complimentary scheduled maintenance.

Sadly, all of this is better than what you’ll get with the 2020 Subaru Forester. It comes with a limited warranty that covers three years or 36,000 miles, as well as a powertrain warranty that covers five years or 60,000 miles. Subaru does not offer any complimentary scheduled maintenance. It’s not enough of a dip to scratch the Forester off your shopping list, but it’s still a (very) slight knock on the car.

The 2020 Forester has an EPA fuel-economy rating that is in line with the rest of compact-crossover segment. It gets 33 miles per gallon of combined city and highway driving. That result isn’t spectacular, but it’s extremely similar to what you would get with the CR-V Touring and the Toyota RAV4 Adventure compact SUVs.

The 2020 Subaru Forester isn’t radically new. In fact, it’s not even all that different from the previous 2019 model. However, fans of this compact SUV are sure to find lots to love – from the roomy interior and cargo space to the great technology and standard all-wheel drive that has made the Forester a popular choice for more than three decades now. For weekend warriors wanting to head to the lake or the woods after leaving the office on Fridays, there are few compact SUVs as likely to get them there as the Subaru Forester. It remains a modern classic. 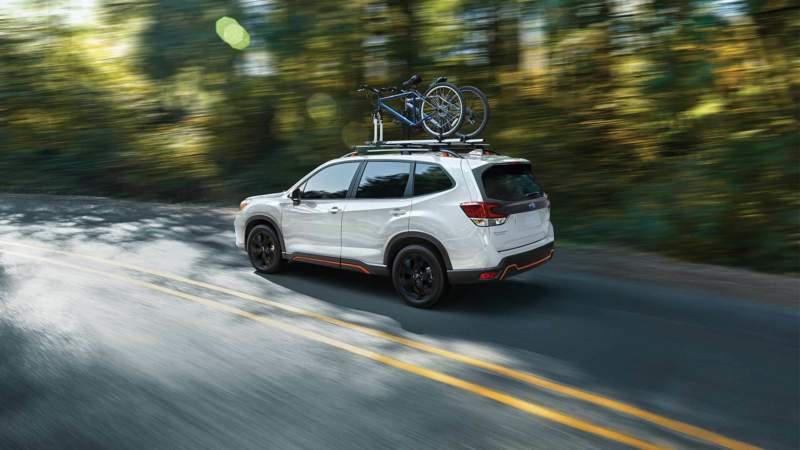