Inside the 2020 Porsche Taycan: An All-Electric Performance Ride

High-performance electric vehicles are now a reality. Now Porsche is getting in on the trend with its 2020 Taycan. Building on the success the company has found with hybrid vehicles such as the 918 Spyder and Panamera, the Taycan is set to challenge what engineers and car enthusiasts believed possible with an electric vehicle .

The Taycan promises exceptional range with over-the-top speed, not to mention a luxurious cabin that people would come to expect from Porsche. With its global debut coming in early September 2019, we thought now would be an ideal time to look inside the 2020 Porsche Taycan. Here’s what you need to know.

While Porsche has a rich and successful history of manufacturing hybrids, the Taycan is their first ever attempt at a fully electric vehicle. It makes sense that the Taycan is a high-performance car. It is, after all, made by Porsche. The company famous for the 911 isn’t going to risk its reputation on anything less than a great racer.

In fact, early media reports (and company social media posts) claim the Taycan can hit 60 mph in 3.0 seconds. That level of acceleration that would be remarkable even in a standard gas-powered car. While not as quick as the Tesla Model S (which can reach 60 in 2.5 seconds), the Taycan is nevertheless extremely powerful and set to impress.

To hit its top speed, the Taycan comes with duo electric motors, which combine to dole out as much as 750 horsepower. The car’s top speed has been clocked at 162 miles per hour, and it can travel 225 to 270 miles on a single battery charge.

It Already Set a Speed Record

Before it was even officially revealed to the public, the Taycan has already set a speed record for a four-door electric car. At the Nürburgring racetrack in Germany, the Taycan completed a lap in just seven minutes and 42 seconds. That’s only four seconds slower than the Porsche Panamera Turbo, which did a lap in 7:38 back in 2016.

Porsche test driver Lars Kern completed the 12.8-mile track with the Taycan in record time. Keep in mind that the Nürburgring is considered a very demanding course.

In a news release, Porsche noted that the vehicle used for the record-breaking run was the range-topping variant of the Taycan that comes equipped with the duo electric motors, one for each axle. Also equipped with all-wheel drive and all-wheel steering, the Taycan, riding on 21-inch wheels, pushed more than 600 horsepower during the test lap.

The Taycan Will be Unveiled on September 4

The Taycan concept car made its debut at the 2019 International Motor Show in Frankfurt. It quickly created a buzz throughout the automotive industry. The 2020 Taycan will be officially revealed on September 4. The debut will span three global events that are scheduled to take place simultaneously in Germany, China, and Canada.

The world premiere will also be livestreamed for anyone who has an internet connection. Porsche is calling the Taycan debut its biggest launch ever. They want to show the world what is truly possible with electric vehicles. Maybe the future is now?

It Has a Unique Chassis System

One of the truly remarkable features of the Taycan is its “4D-Chassis Control.” Porsche says it analyzes and synchronizes all the electric car’s chassis systems in real-time. These include the adaptive air suspension and electromechanical roll stabilization, which work together in perfect synchronization to provide maximum performance for the driver.

The greatest chassis alignment comes when the Taycan is in “Sport Plus” driving mode. Porsche is selling the new “4D-Chassis Control” system as a completely unique, proprietary gamechanger for the auto industry. Time will tell if this is accurate, but it certainly sounds cool.

The Taycan’s cabin is quite minimalist by design standards. However, it does feature four (count ‘em, four!) display monitors, which equals 53-inches of screen space in the electric car. Most impressive is a 10.9-inch screen that’s positioned in front of the passenger. Porsche claims that this monitor can stream movies without distracting the driver. Now that would be a feat!

To be sure, there’s never been a Porsche with so many displays before. Many people who’ve seen inside the Taycan have been shocked at all the screens. Surrounding the monitors are touch buttons galore that control everything from headlights and stability control to the suspension. Fortunately, the screens come equipped with numerous pre-set modes that can be cycled through via the steering wheel.

In an interview with Automotive News, Porsche’s Director of Driver Experience Oliver Fritz noted that the company almost installed a web browser along with the infotainment system in the Taycan. However, the web browser idea was scrapped following heated arguments about driver distraction.

Of course, Tesla has been widely criticized for including a web browser option in some of its vehicles too. Customers have also criticized the Tesla center screen for being too slow and cumbersome. In the end, Porsche put safety over the novelty of having a web browser front-and-center in the Taycan. Just pull over and use your phone!

However the Taycan is ultimately received, there is no doubting that Porsche is moving electric vehicles in new and exciting directions. The combination of energy efficiency and high performance promises to be ground-breaking. The starting price is high, at just over $150,000 for the Taycan Turbo. The Turbo S gets you higher performance, and a price tag starting at $185,000. The Taycan can be expected to give Tesla and other high-performance electric vehicles a run for their money, although they are already behind on price point.

Update: Porsche has revealed a third trim level, the Taycan 4S. It’s the new base model, and starts at $103,800. That’s close to $50,000 less than the previous minimum spend. The 4S has a little less power and performance, going 0-to-60 in 3.8 seconds and “only” a top speed of 155 mph. It also has a slightly smaller battery, meaning a bit less horsepower (522 hp) and driving range (250 miles). However, for just over a hundred grand, it’s pretty enticing for anyone interested in this all electric sports car.

Here are some more photos from the big reveal (courtesy of Porsche): 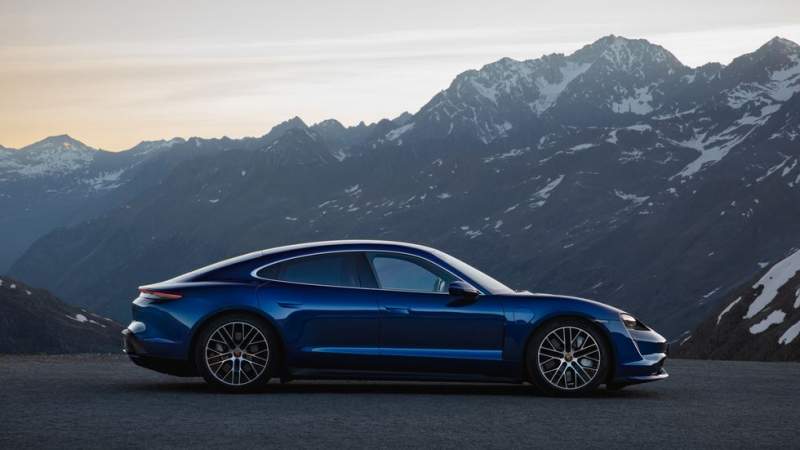 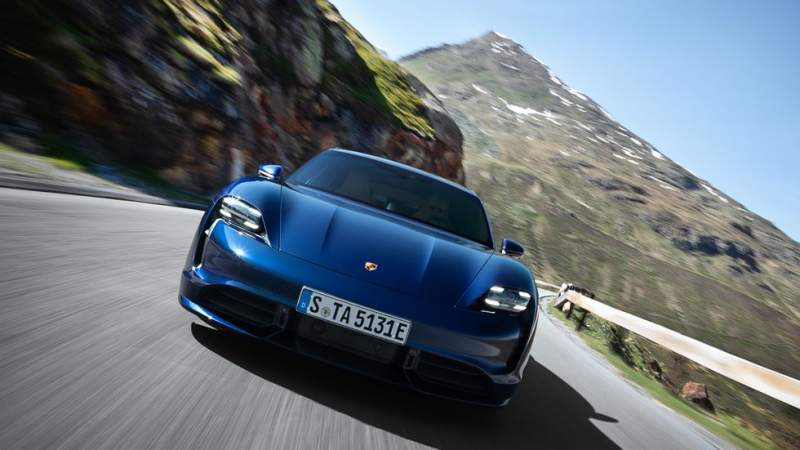 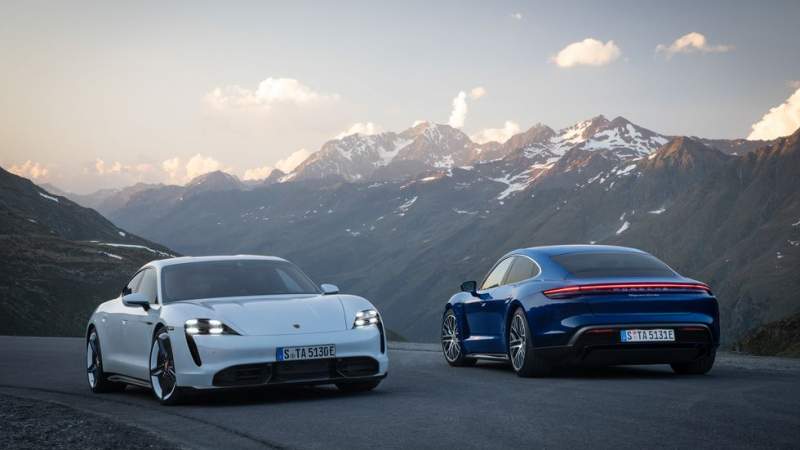 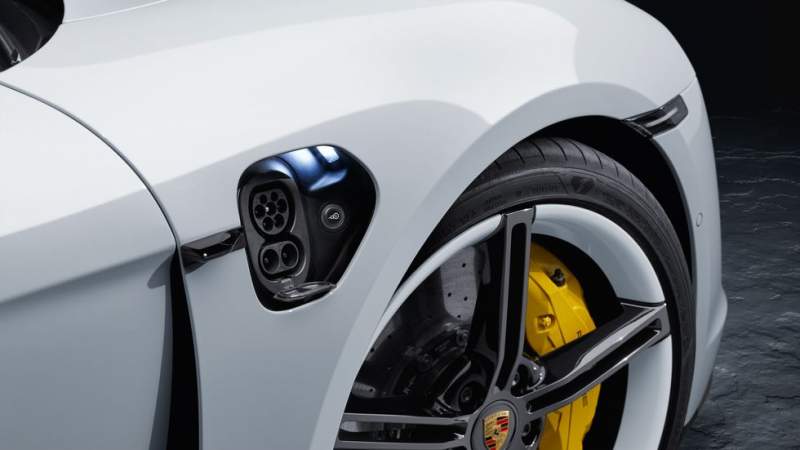 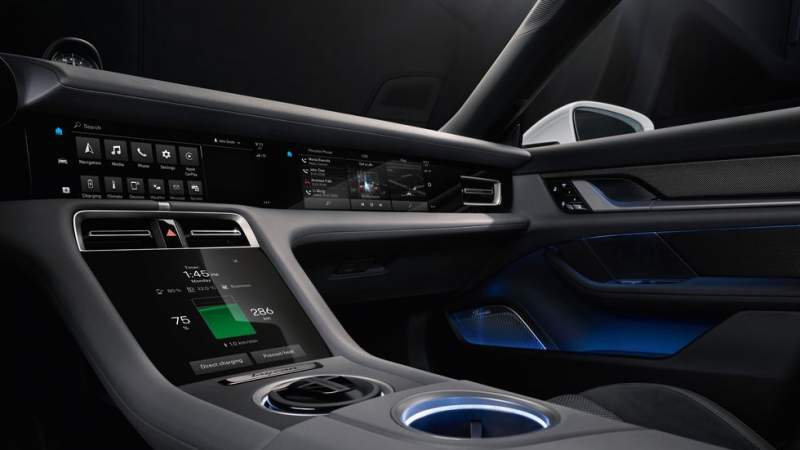 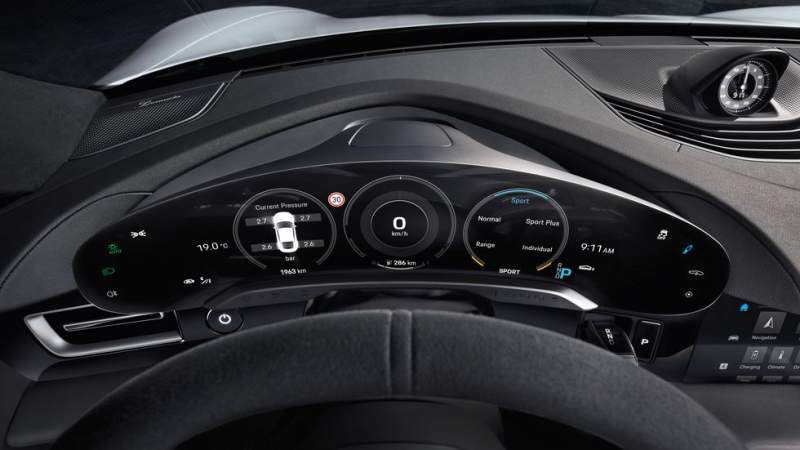 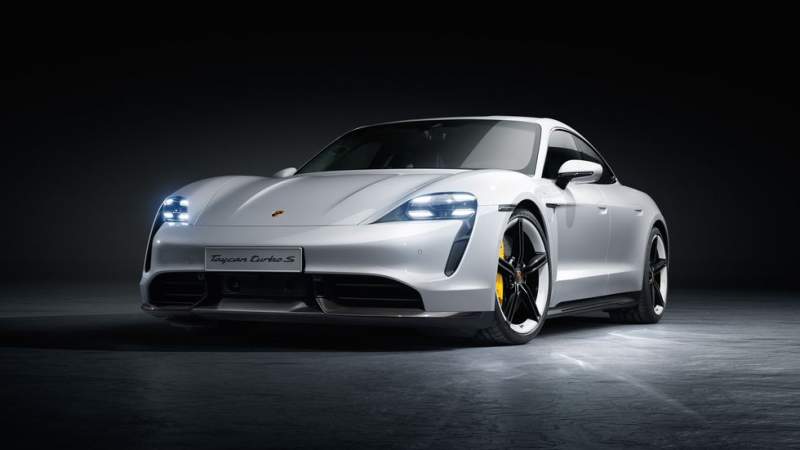 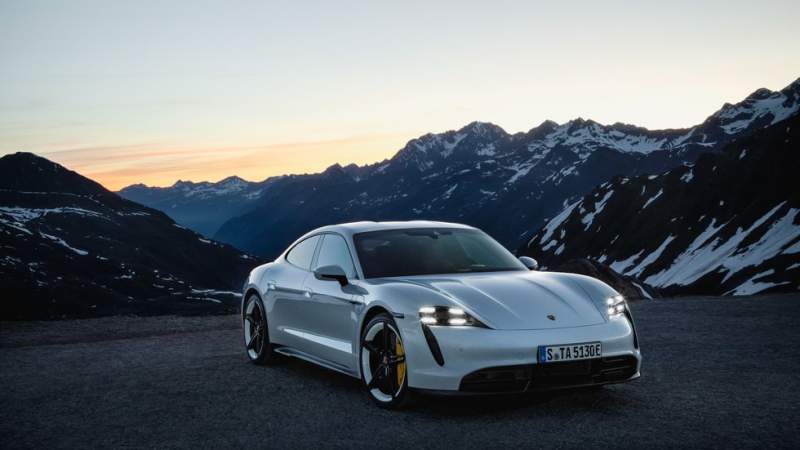 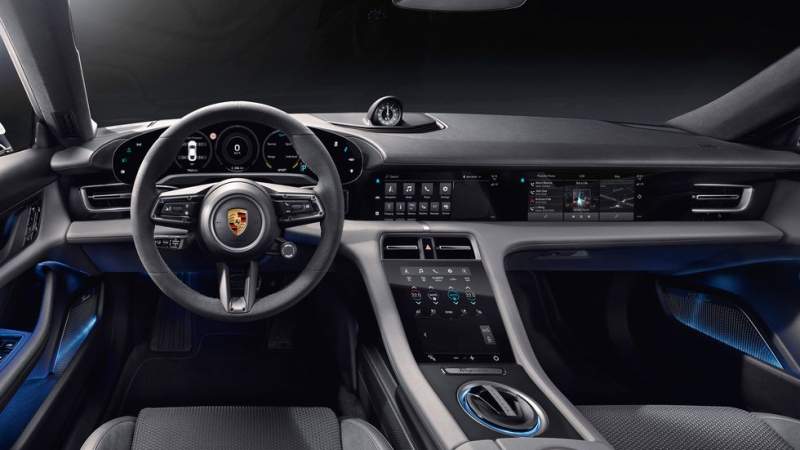