Inside the 2020 Honda Clarity: The Future of Alternative Fuel

With each passing year, there are more and more alternative fuel vehicles roaming the streets. Models that were once limited only to California are popping up all over the country. The 2020 Honda Clarity is one of these vehicles. Available in a variety of fuel types, the Clarity widens the field to better fit into your lifestyle.

Though particularities and specifications on the 2020 Honda Clarity aren’t yet widely available, we’ve gathered the information spread across the internet into one informative article. After reading this, we hope you at least consider test-driving a Clarity to get a better understanding of what the future holds in terms of alternative fuel. The automotive world is evolving rapidly, and the Clarity is certainly more evidence of that.

The 2020 Honda Clarity will probably come in some of the same paint colors found on 2019 Clarity model, which are listed below:

There are a few powertrains to choose from when it comes to this eco-friendly, front-wheel drive sedan. The plug-in hybrid Clarity is powered by a 1.5-liter 4-cylinder gas engine that mates to an electric motor hybrid system. Complete with 212 horsepower and 232 lb-ft of torque, it’s not the slouch off the line you might think it would be. The electric range on this model is about 47 miles. After that, the gas engine kicks in.

The same can be said for the Clarity electric model, which features an electric motor and lithium-ion battery pack. Capable of 161 horsepower and 221 lb-ft of torque, this engine is the least powerful of the trio. However, you will get about 93 miles worth of range on a single charge.

Next up is the fuel cell-powered Clarity, which features an electric motor that feeds off a fuel cell. Making around 174 horsepower and 221 lb-ft of torque, the fuel cell-powered Clarity might seem like a good middle of the road choice. However, that fuel cells require hydrogen. Finding a hydrogen fuel station might be trickier than you thought. Plus that fill-up could damage your wallet even though it’s saving the environment. Do your research and consider whether your budget can make that trade off.

Though they’re not technically trim levels, it’s good to consider the three Clarity models in their own right. You can choose between a plug-in hybrid, a fully electric, and a hydrogen-powered fuel cell car. Beyond that, the hybrid version has two trims to choose from, while the electric and fuel cell models are only available in a singular trim. This is most likely due to the fact that most customers will gravitate towards the plug-in hybrid first. In fact, the EV and fuel cell models are still only available in California. There’s no word when (or if) Honda will release them elsewhere. Plus you can only lease these two models so far, with no option to purchase them outright.

The plug-in hybrid Clarity can be purchased as either a base or Touring model. Base models include keyless entry, push-button start, heated front seats, an 8-inch touchscreen, Android Auto and Apple CarPlay compatibility, and the Honda Sensing safety system package. If you choose Touring, you’ll upgrade to power front seats, navigation, and leather interior.

The fuel efficiency ratings of the 2020 Clarity will likely be around the same as can be found on the 2019 model. After all, that’s one of the major features of this green sedan. The 1.5-liter 4-cylinder gas/electric engine that’s paired to a continuously variable transmission achieves 44 city and 40 highway EPA-estimated miles-per-gallon (MPG). If you prefer the all-electric powertrain, you’ll see around 126 city and 103 highway MPG. That’s quite a big jump from the plug-in hybrid, which holds its own among other plug-ins on the market.

How the 2020 Honda Clarity Compares

As the market continues to welcome hybrids and fully-electric models onto the worldwide stage, the Clarity must work that much harder to make a name for itself. It’s widely known that Tesla continues to be a leading force in the alternative fuel industry. That being said, Honda sold or leased just over 20,000 Clarity models in 2018, most of which were plug-in hybrid models. That’s a decent start!

When you consider the Clarity lineup overall, there’s not necessarily a similar offering from any other manufacturer. Sure, there are other brands that do offer various types of green vehicles but none offer such a wide variety within the same nameplate. Since the plug-in hybrid model of the Clarity starts at just over $33,000, it’s an affordable solution many families can afford.

What About The Competition?

The Toyota Prius Prime and Hyundai Ioniq hybrids are comparably priced to the Clarity. Though each model offers the customer a different experience, the Clarity represents Honda’s take on the fuel of the future. With that come some likes and dislikes from big-name reviewers, such as Cars.com. After spending some time with the new Clarity, these experts found some “braking awkwardness” and “vaguely disconnected brake-pedal feel.” Spend some time backing up a hybrid model and you’ll soon see what they mean.

At the same time, there are some characteristics that make the Clarity a valuable alternative to models such as the Chevy Bolt and Volt, the BMW i3 and i8, and the many other hybrid or electric vehicles on the market. While the Clarity doesn’t sport the same flair for a futuristic look as the BMW i3 does, it certainly looks more like a “normal” gas-powered car than even the Bolt and Volt. You’ll still get some of the same basic features Honda includes on all their models, base or otherwise. When paired with the Honda Sensing suite of driver aids, the alternative nature of the 2020 Clarity lets you feel good about being green.

If you haven’t considered test driving an alternatively-fueled vehicle, we encourage you to do so. Take a few minutes out of your busy Saturday and see what all the hype is about. Visit your favorite local dealership to see what hybrid, electric, and perhaps even fuel cell-powered vehicles they offer. Gain some perspective so that the next time you’re in the market for a car, you know what you have to choose from beforehand.

Though the 2020 Honda Clarity hasn’t quite made its debut yet, we anticipate it will continue the Honda legacy of prioritizing utility and safety over flash. Keep an eye out at your local Honda dealership to find out more about when the 2020 Clarity will arrive. Do your part to lessen your carbon footprint. 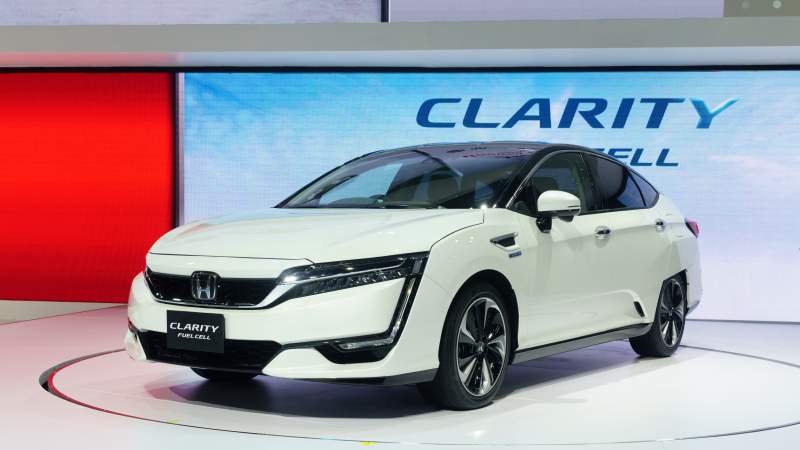