Inside the 2019 Nissan Frontier

Ever since the Nissan Frontier’s debut in 1998, it has been Nissan’s best-selling pickup truck. A mainstay in Nissan’s line, the Frontier — also called the Navarra in other markets — offers the best of both worlds by being affordable and efficient while providing the power and utility of a full-size pickup.

The all-new 2019 Nissan Frontier is better than ever, bringing updates and added durability. With an MSRP starting at just $18,900, it’s definitely a great choice to consider for a compact, midsize pickup.

Not to be confused with a luxury pickup truck, the Frontier is marketed as a no-nonsense, mid-sized pickup truck that is built to stand up against all types of rugged terrain — and it just so happens to live up to the high expectations. The high ground clearance and 4WD make navigating rough terrain effortlessly. With a combination of unique off-road features and advanced technology, the Frontier can travel anywhere the road takes you. To emphasize the Frontier’s durability and ruggedness, it comes with the following unique features:

Although the 2019 Frontier is mid-sized, this pickup can flex. With a maximum tow load of 6,725 lbs., you can haul heavy loads from Point A to Point B with no problem. If you’re looking to haul a smaller load of cargo, the Frontier’s truck bed is also impressive and has the capability to handle up to 1,460 lbs.

It doesn’t matter whether you have a long daily commute or stay close to home. Maximizing your miles per gallon is important.

The Nissan Frontier gets 23 mpg on the highway and 17 mpg in the city, which is very desirable for a pickup truck. In fact, the Frontier made Kelley Blue Book’s list of the most fuel-efficient trucks of 2019.

While the 2019 Nissan Frontier doesn’t come with advanced safety features such as automatic emergency braking, active lane control, or blind-spot monitoring, it does come standard equipped with required safety features, such as front and side airbags, traction control, stability control, and a rearview camera. Thanks to all these safety measures, the IIHS gave the 2019 Nissan Frontier a score of four out of five when it comes to overall safety.

In order to maintain a competitive edge, the 2019 Nissan Frontier doesn’t have many bells or whistles. However, 2019 did bring along a few small changes. Each unit now includes a 7.0-inch touchscreen with the standard infotainment system that replaces the five-inch display from previous model years. Upper trims are equipped with a 5.8-inch screen that includes a navigation system and a satellite radio. Also new for 2019, Nissan now offers a new exterior paint color, Cayenne Red. It may surprise you to know that the base model does not include standard features like power windows or power locks.

For those desiring an update, stay tuned for the 2020 Nissan Frontier model. According to reports, Nissan is completely redesigning the Frontier and are almost finished.

The Toyota Tacoma is a high-ranking compact pickup and is one of the top competitors of the Nissan Frontier. Like the Frontier, the Tacoma is built for off-roading and has towing and hauling capabilities. They both offer a four-cylinder engine as well as a V6, with very similar horsepower and torque produced. Fuel economy is also very comparable between the two rivals. When it comes to technology, you won’t find an abundance of it in either of these trucks. Tacoma is rated to have slightly better handling on the road than the Frontier. In 2016, the Toyota Tacoma had a design upgrade, making it a more attractive option than the outdated Nissan Frontier.

Overall, the Frontier and the Tacoma are very comparable pickup trucks. When it comes to which is better, the Tacoma rates slightly higher, but at the same time, it also comes in at a higher price tag.

The 2019 Nissan Frontier allows you to customize your pickup. You can make the Frontier work for you and your needs. If you would like to haul more items, you can elect to choose an extended bed. If you need more room in your truck’s cabin, you may want to go with the extended cab. You can also choose whether you want a V6 or I4 engine and a manual or automatic transmission. If you don’t need 4WD, you can opt for the less expensive 2WD models as well.

The Frontier offers exceptional control of the wheel with tight and responsive movements. When you make a sharp turn, the body of the truck turns with you without shifting from underneath you. The six-speed automatic or manual transmission systems both work well and shift smoothly.

The new 2019 Nissan Frontier isn’t really new other than a few minor upgrades. In reality, it’s the same truck that we’ve seen since 2005. As the competition gets facelifts to keep up with the times, the Frontier seems to be stuck in a time continuum. 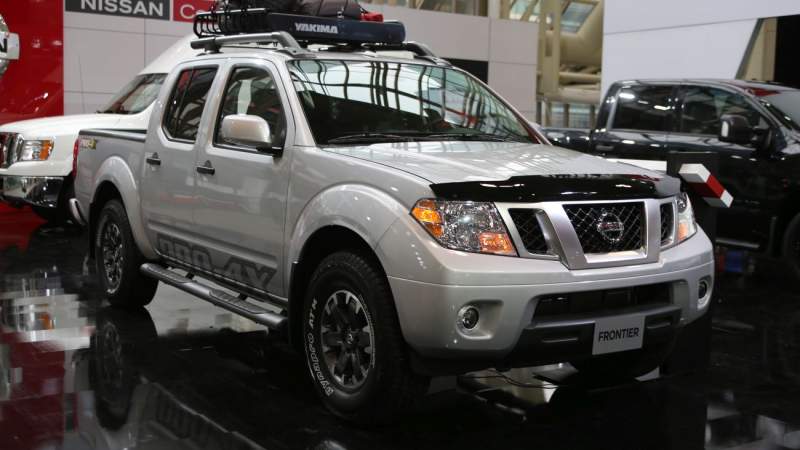