Inside The 2019 Chevrolet Corvette ZR1: An American Thrill Machine

Exotic supercars occupy the daydreams of gearheads worldwide. From high-end accents and dynamic design features to hypnotic stances and insanely powerful engines, these models herald the future of the automotive industry. Famous — and infamous — names find their place among the supercar rankings, jostling for the spotlight in a never-ending competition to be the fastest, sleekest, and sexiest. Think McLaren, Ferrari, Lamborghini, Koenigsegg, Bugatti, and… Chevrolet?

Whether you love it or hate it, the Corvette (or ‘Vette as it is often referred to) represents the American-made supercar segment. The Dodge Viper enjoys success as well, but not in the same way the Vette does. Where the Viper has been banished to the track, the Corvette still roams city streets and wide-open highways.

In this article, we’re going to discuss the 2019 Chevy Corvette ZR1, a model designed “for road racers and road-going enthusiasts looking for uncompromising capability,” according to CorvetteOnline.com. Named the “most powerful Corvette ever built” by U.S. News, the ZR1 pushes its racing pedigree above all else. It’s certainly an expensive alternative to the rest of Chevy’s moderately-priced fleet. But can you really put a price on these kinds of thrills?

The 2019 Chevrolet Corvette ZR1 is powered by a supercharged 6.2-liter V8, capable of 755 horsepower and 715 lb-ft of torque. Available transmissions include either a 7-speed manual or an 8-speed automatic. This car is built for power and speed, going from 0-to-60 mpg in just 2.85 seconds and reaching a top speed of 212 mph. The newest ZR1 is only available in rear-wheel drive. If you want one, you better act fact, because Chevrolet will only produce about 3,000 units for the 2019 model year. The 2019 ZR1 can be purchased as either a coupe or a convertible.

The seventh generation of the Chevrolet Corvette has little in the way of extra safety aids on board. Edmunds experts report standard safety features include curb view cameras, performance traction management, and a heads-up display (HUD). The National Highway Traffic Safety Administration (NHTSA) and the Insurance Institute for Highway Safety (IIHS) have not yet rated the 2019 ZR1, which isn’t surprising given the vehicle only debuted in December 2018 at the Los Angeles Auto Show.

While we caution all readers to be safe on the road, no matter what vehicle you’re in, let’s shift focus to the accessories and features available on the 2019 Vette ZR1. Here’s what you’ll be spending around (at least) $120,000 on.

The first of only two trim levels available on the 2019 ZR1, the 1ZR model rides on 19-inch wheels up front and 20-inch wheels out back. The Eaton supercharger lurks beneath a carbon fiber hood. Other carbon fiber accents include a front splitter, rocker panels, an air extractor, and an optional carbon fiber rear wing that comes as part of the ZTK Performance Package. Dual bucket seats are wrapped in black Napa leather with microfiber inserts. The 2019 ZR1 also comes with an electronic limited-slip differential.

Choose the 3ZR model and you’ll enjoy heated seats, a Performance Data Recorder, and a BOSE sound system. Other features include a reconfigurable instrument cluster, built-in 4G LTE WiFi, Bluetooth, and Android Auto and Apple CarPlay. The six-piston carbon ceramic brakes from Brembo are sure to bring all 755 ponies to a quick halt, but the sound of that exhaust might just keep you going. With four driving modes (Track, Sport, Tour, and Stealth), the exhaust definitely sounds like a trademark Vette.

The 2019 Corvette ZR1 achieves 13 city and 19 highway EPA-estimated MPG when equipped with a manual transmission. Choose the automatic and you’ll be looking at 12 city and 20 highway MPG. Both versions average out to a 15 MPG combined rating. While these numbers aren’t exactly record-breaking, something tells us most owners won’t be purchasing the ZR1 for its ability to sip fuel.

How the 2019 Chevrolet Corvette ZR1 Compares

Chevrolet certainly touts quite a few of the Corvette ZR1’s accomplishments. In fact, you can take delivery of your 2019 ZR1 at the National Corvette Museum — and score a free tour, we hope! If not, at least you’re enrolled in the Ron Fellows Performance Driving School, located at the Spring Mountain Motor Resort and Country Club in Nevada. To really get a sense of what the 2019 ZR1 offers, let’s take a closer look at what the experts had to say.

Edmunds reviewers called it the “supercar slayer,” but does this American-made legend have what it takes to compete with the best-of-the-best? Well, consider that the Acura NSX, one of the Vette’s prime opponents, is made here in Ohio. Both of these models race bumper-to-bumper against the likes of Ford’s GT, the Dodge Viper, Audi’s R8, and Mercedes-Benz’s AMG S65. Porsche’s 911 GT3 isn’t far out of reach either, hovering around the $150,000 price range and nearing $200,000 when generously equipped. Dodge’s Hellcat twins, the Charger and Challenger, are much more affordable at price tags well under $100,000. However, they do suffer from a big bone structure when it comes to styling.

Interestingly enough, the crew at Edmunds doesn’t even recommend buying a 2019 ZR1. That might be because the 3,000 brand new models are pretty much spoken for. Whatever the case, Edmunds recommends the Grand Sport 2LT instead. It’s only got about 460 horsepower but you’re still getting a good deal for the money. Still, experts here did give the Vette props for generous cargo space. And in the words of U.S. News reviewers, the “cabin is as dark and dramatic as most would expect.”

In the grand scheme of things, those who make the purchase list for the 2019 Chevrolet Corvette ZR1 will most likely disregard anything the competition has to offer. After all, customers flock to the brands they like. Whether you click away from this article convinced Chevrolet is stepping up its game or forgetting about the 2019 ZR1 altogether, we appreciate you taking a look. Allow us to offer some closing remarks.

Named Road and Track’s 2019 Performance Car of the Year, the 2019 Corvette ZR1 packs “unbeatable performance for the price” into a stealthy, low-slung package. If you’re given the chance to take a spin in one of these power machines, take full advantage! You should also keep your eye out for 2020’s model, whether you’re a die-hard Corvette fan or not. The Vette is here to stay! 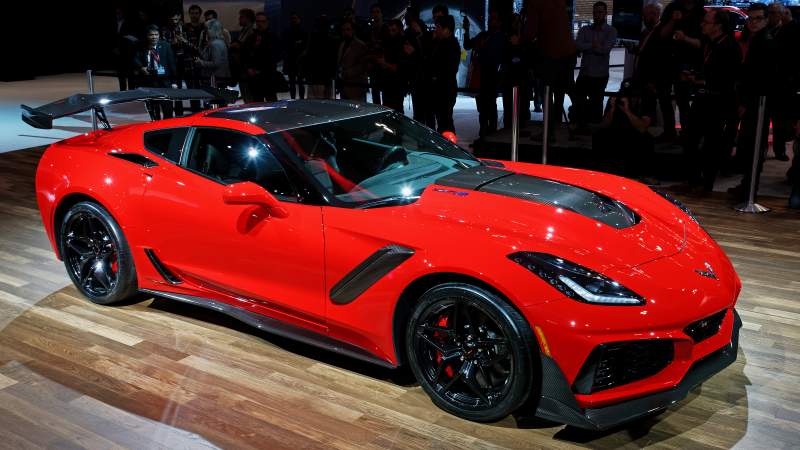