Inside the 2019 Chevrolet Blazer

There’s always a lot of interest when an automaker brings a nameplate back from the dead. Unfortunately, there can also be drawbacks with using a name from the past instead of starting from scratch with an entirely new name.

If the previous models to have the name are now well-regarded, much-loved classics, the manufacturer runs the risk of the new model not living up to its illustrious predecessors. On the other hand, a new model could be saddled with some of the old model’s reputational baggage if it didn’t depart the market under the best of circumstances.

Starting at $28,800, the 2019 Chevrolet Blazer is a brand new midsize crossover SUV that sits in the range above the five-seat Equinox, but below the seven-seat Traverse. In truth, the 2019 Blazer inherits nothing from Blazers of the past other than the name.

With all that said, let’s see how Chevrolet has done with this latest reboot.

The 2019 Chevrolet Blazer has three trim levels: the L, RS, and Premier. All versions are standard front-wheel-drive, but all-wheel-drive is an option at all trim levels apart from the L.

Chevrolet has followed the current trend of having a four-cylinder unit as its base engine in the new Blazer family. Although it’s not turbocharged, the 2.5-liter inline four develops 193 horsepower and 188 pound-feet of torque. It’s perhaps even more surprising that this engine works as well as it does in this application when you find out the Blazer weighs-in at more than 4,000 pounds. Part of the recent the four-cylinder works as well as it does is the excellent nine-speed automatic transmission that’s been programmed to suit the Blazer.

If, however, you want the performance of the Blazer to match its aggressive, futuristic styling, Chevrolet has kindly given us a V6 option. Models equipped with the 3.6-liter V6 get a much livelier 308 horsepower and 270 pound-feet of torque. Plus, it keeps the excellent nine-speed automatic transmission that does such a good job with the inline-four.

There are two all-wheel-drive systems available for the 2019 Blazer. Although there’s a fairly basic system found on lower trim levels, the RS and Premier trims get a more advanced system featuring a twin-clutch rear differential, which means it’s capable of shifting torque between the rear wheels for improved handling and for extra traction. In addition to the AWD mode, the Blazer has Sport, Off-Road, and Tow/Haul modes.

While the Blazer has an entirely retro name, there’s absolutely nothing retro about the way this crossover looks. The 2019 Blazer boasts a floating canopy, sculptured sides, and a front fascia that looks to have taken some inspiration from Toyota and Lexus to deliver an incredibly contemporary overall design. Despite being a little much for some buyers who prefer a bit more anonymity, it’s hard to criticize Chevrolet for coming up with such a standout design.

A closer examination of the dimensions reveal the Blazer isn’t a great deal larger than the Equinox, but the Blazer offers buyers a much more aggressive and futuristic look with lots of sharp edges and angles. The Equinox is fine if you want to blend into the background, but if you’re looking to make a statement with what you’re driving, the Blazer is definitely the way to go.

You may or may not be pleased to hear the styling of the interior is a lot more conservative than the exterior design. Because Chevrolet has resisted the urge to squeeze a third row into the Blazer, there’s plenty of room inside for five people. Although the backs of the seats are very supportive and comfortable, it would have been nice if the bases had received the same treatment.

There are three different fabrics available for covering those seats. In addition to the usual standard cloth and upscale leather, there’s also a sporty neoprene-like fabric that’s worth checking out. Once again, it won’t be for everyone, but it’s an option some people will really enjoy.

There are good and bad points with the standard features of the 2019 Blazer.

Unfortunately, unless you break through the $40,000 price threshold, automatic emergency braking isn’t standard. Some buyers won’t be too concerned about it, but it could be a dealbreaker for others.

The 2019 Chevrolet Blazer is a more niche model than its Equinox and Traverse siblings, but that’s not necessarily a bad thing. If it wasn’t for a model like the Blazer, the Nissan Murano would have this interesting part of the midsize SUV segment all to itself.

As the Murano’s unique styling has been toned down quite a bit since its early days, there’s definitely a place for the Blazer. In the right color and with the right wheels, the Blazer can look sensational. Plus, if you pay more to get that V6 under the hood, you have a vehicle that runs as well as it looks. 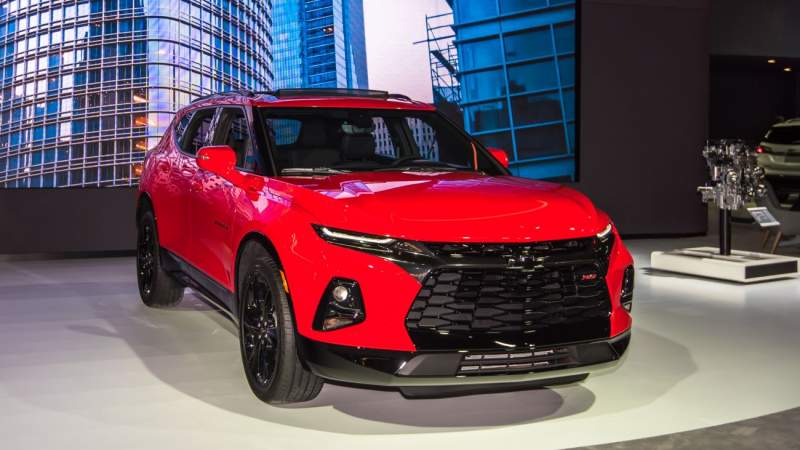