Eight-seat SUVs are still relatively thin on the ground, even though the minivan market has come under assault from the soft-roader crowd in recent years. The GMC Yukon is good old-fashioned heavyweight, with a body-on-frame construction and up to nine seats if you spec it right.

So, really, the GMC Yukon is a luxury bus with an attitude, which is exactly the kind of sanctuary the minivan crowd has been looking for. It’s car that can carry a substantial family and still look like a prestige machine when you’re out on your own.

That monumental front end, bluff and dominated by the grille, provides massive road presence and you will move aside when it looms large in your mirror. It’s big, it’s boxy, it’s intimidating, and yet inside it’s a luxury car that can take the fight to some of the best in the class.

The base 2018 GMC Yukon SLE costs $50,395, which gets you into a rear-drive version of the 5.3-liter V8 with a six-speed gearbox. It’s a 355 bhp powerplant with 383 lb/ft of torque, which is generally sufficient. GMC has a sting in the tail, though, if you want to go for something bigger.

From there you’ve got serious options, the main one being if you want to opt for the standard Yukon or the XL that is 20 inches longer. Most of that extra room has been given to the third row of seats. Inevitably it’s slightly heavier, slower, thirstier, and more expensive, but you can stretch out in the back like you own the place.

You can upgrade to four-wheel-drive and if you go for the range-topping Denali you can also get the 6.2-liter V8 with 420 bhp and a 10-speed gearbox. If that sounds familiar, it should be, this is the same basic powerplant that you find across GM’s bigger vehicles. It makes for a seriously fast car, despite its bulk, and you can expect the Yukon to hit 60 mph in seven seconds in its most aggressive form. It will also hit 111 mph, which is plenty fast enough for a living room on wheels that also needs to stop.

Aside from that there are three basic trim levels, the SLE, SLT, and Denali. The Denali is almost a luxury sub-brand, but its very presence has forced a trickle-down effect and every GMC has taken a quantum leap forward on the interior in recent times. So, get ready for premium-car style plush front seats and soft-touch materials throughout the cabin.

The SLT is a solid compromise, because the Denali is nibbling at the heels of more exotic competition and a fully loaded car costs around $80,000. For that money, you get a HUD, Magnetic Ride suspension to control that mass in the bends, full Nappa leather, a 10-speaker BOSE sound system, and more.

It’s just too big for serious off-roading, but the four-wheel-drive version does come with low-ratios to get this 5,500 lb beast moving in the mud or for specific tasks like pulling a boat out the water.

Considering the weight of the car, it’s surprisingly fuel efficient. The 5.3-liter V8, with rear-wheel-drive returns 16 mpg in the city and 23 mpg on the open road. That, frankly, is outstanding for such a heavy lump of metal.

Step up to the 6.2-liter and four-wheel-drive and you will obviously pay a price at the pumps, but it will still give you 14 mpg in town and 23 mpg on the freeway. 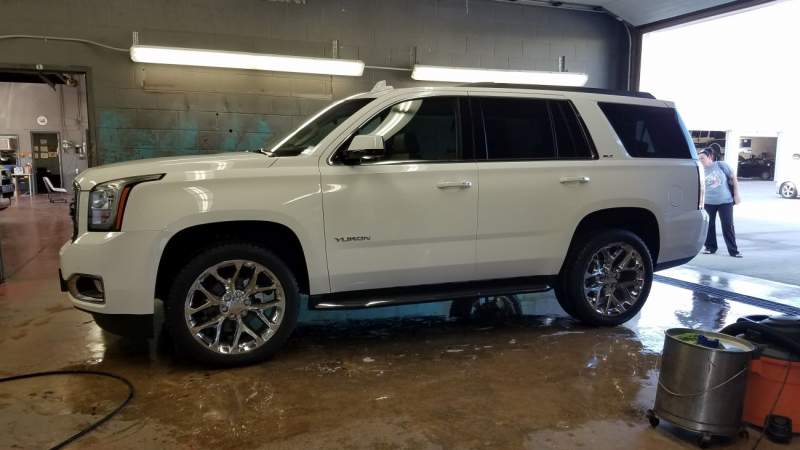 This is a massive car and so there really isn’t much that can have an impact. The Yukon is an apex predator and it’s no surprise that it scores five stars in the front and side NHTSA crash tests. A three-star rollover rating drags it down to a four-star overall rating, though.

You get a reversing camera and rear park assist on the base level model and rear cross-traffic alerts, adaptive cruise control, low-speed emergency braking, active lane control, and more on the SLT and Denali. Every model comes with “Teen Driver Mode,” too, so you can limit how much fun your children or the valet can have.

The base car comes with an eight-inch infotainment touchscreen system that’s ready for Apple CarPlay and Android Auto, as well as a 4G Wi-Fi hotspot. The MyGMC App means you can control the car from your phone, partially, and vice versa. It’s a superb system and you don’t need more, although you can opt for enhanced navigation.

We can start with the Yukon’s stablemates, the Chevy Suburban and even the Tahoe if you’re looking at the smaller GMC. This is a personal preference as the slight savings on offer with the Chevy really won’t swing the balance. At this price point, the more luxurious look and feel of the GMC are probably more relevant.

The Lincoln Navigator is a real issue for anybody in this sector and it’s more powerful, hugely distinctive and it comes with a more advanced, pared down and clutter-free interior.

Other options include the Ford Expedition, which is another truck-based SUV that is targeted more closely at the off-road brigade. The Expedition is more efficient and wins the towing war, even with the Yukon’s “tow mode” that engages a low-ratio, but the Yukon arguably has its measure throughout the range. The Expedition is about the same price, though, and loses out to the Yukon in pure capacity as it’s an eight seater at most.

The Nissan Armada is a new contender on the block and its big V8 could have an impact on the All-American muscle, while the Toyota Sequoia is another big SUV that is hard to ignore.

The Denali is a cut above, but it’s a seriously expensive car and you can get into an arguably more impressive Cadillac Escalade for that money. You can also look at the Volvo XC90 or a fully-loaded Chrysler Pacifica minivan. 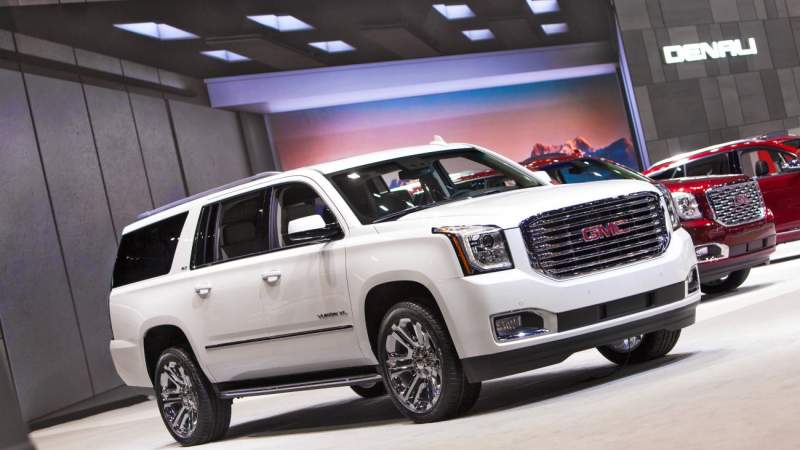