Inside Look at the 2020 Ford Explorer

For more than 30 years, the Ford Explorer has continued to be one of the most popular and best-selling SUVs in the world. While the Explorer has continued to do well with consumers, many are even more excited for the 2020 model year as it will have a variety of amazing features that will impress drivers and critics. The 2020 model year will come with a starting MSRP of around $33,750.

Beyond the change to the driving configuration, the Explorer will also have three new engine options for someone to choose from as well as a hybrid option, which will provide great fuel efficiency. Each of the new engine options will be more powerful than the prior model year’s counterpart. There are also a wide variety of new interior tech and safety features that are now available at lower trim levels.

The 2020 Ford Explorer will have three different engine options.

The base engine option, which comes with the base, XLT, and Limited trims, will be a 2.3-liter turbocharged four-cylinder engine that can provide more than 300 horsepower and over 310 pound-feet of torque. This engine is also coupled with a 10-speed automatic transmission and EcoBoost, which helps to give a smoother control to drivers and reduce fuel efficiency.

The next engine option is the 3.0-liter V6 EcoBoost engine that produces an impressive 365 horsepower and more than 375 pound-feet of torque. This engine also comes with the same 10-speed transmission.

Those that are looking for the most engine performance possible will want to upgrade to the Explorer ST, which produces nearly 400 horsepower and can achieve a top speed of more than 140 mph. With the more powerful engine options, total towing capacity increases to more than 5,000 pounds.

For those that want the best fuel efficiency possible, the 2020 Ford Explorer can come paired with a 3.3-liter hybrid engine. This engine gets better fuel efficiency but still provides an impressive 320 horsepower.

Fuel economy metrics have not yet been officially made available for the 2020 Ford Explorer yet. However, it is expected that the overall fuel efficiency will be similar to what was in the 2019 model year.

In that model year, the Explorer’s base engine option produced around 27 mpg on the highway and 19 mpg in the city. When upgraded all the way to the highest engine option, fuel efficiency declined to around 22 mpg on the highway. While the actual metrics are not yet available, it is believed that the 2020 hybrid Ford Explorer will have a full tank range of more than 500 miles.

One of the top selling points of the 2020 Ford Explorer is that it will come loaded with safety and entertainment features. The 2020 Explorer will come standard with the SYNC3 infotainment product that includes an eight-inch display, Apple Car Play and Android Auto configuration, and even a Wi-Fi hotspot. Those that upgrade to some of the higher trim levels will enjoy the 12.3-inch digital instrument control, the expanded 10.1-inch screen, two USB ports, HD radio, a Bang & Olufsen audio system, and the wireless charging pad.

Those that are looking for better safety features in an SUV will want to look no further than the 2020 Explorer. This SUV comes standard with the Co-Pilot 360 package that includes a rearview camera, automatic high beams, blind spot monitoring, cross traffic alert, and a pre-collision assist system. There are some additional safety features as well that come with higher trim levels including the Active Park Assist 2.0 system, which includes reverse brake assist, 360-degree driving camera, and speed sign recognition. It also includes a steering and braking assist program, which is especially ideal when you are driving in some more challenging conditions.

How it Stacks Up to Against the Competition

The midsize SUV market is one of the most competitive in the entire auto industry. There are car manufacturers at all price points that try to come up with new features each year in order to win over some potential customers. Overall, the 2020 Ford Explorer does match up well against the competition. Some of the leading competitors in the class will once again be the Jeep Grand Cherokee and Buick Enclave.

Compared to other vehicles in the same class, the Explorer will fare well as it has a third-row option, which is not always available with all midsize SUVs. This will allow it to be a more affordable option compared to large SUVs, although the cabin space may not be as significant as some larger SUV and trucks. As an added benefit, many drivers will enjoy the new suite of interior and safety features that will come standard with the midsize SUV.

Compared to some of the more affordable SUVs on the market, the 2020 Ford Explorer will have very strong fuel efficiency. Even the base engine option produces horsepower that is well in excess of the engine performance provided by some of the other vehicles in the same class.

Overall, there are many advantages that come with getting the 2020 Ford Explorer. One of the main advantages is the strong engine performance. With three different engines, including the base turbocharged four-cylinder engine, everyone will be able to find an explorer that meets their needs regarding engine performance and towing capacity.

Another benefit of the 2020 Ford Explorer is that it has many features that come standard at even the lowest trim levels. The 2020 model year has seen a variety of new features including the SYNC3 infotainment system, smartphone integration, and the new wireless charging feature. There are also a variety of new safety features included in the Active Park Assist 2.0 system that are not available in some of the competing vehicles.

Also, many consumers like the fact that the Explorer comes with a third row for seating. While the Explorer’s cargo space is not too sufficient when this row is down, the expanded capacity is a strong feature that is normally only found in larger luxury SUVs. This helps it to stand out against some of the competition in the same class. 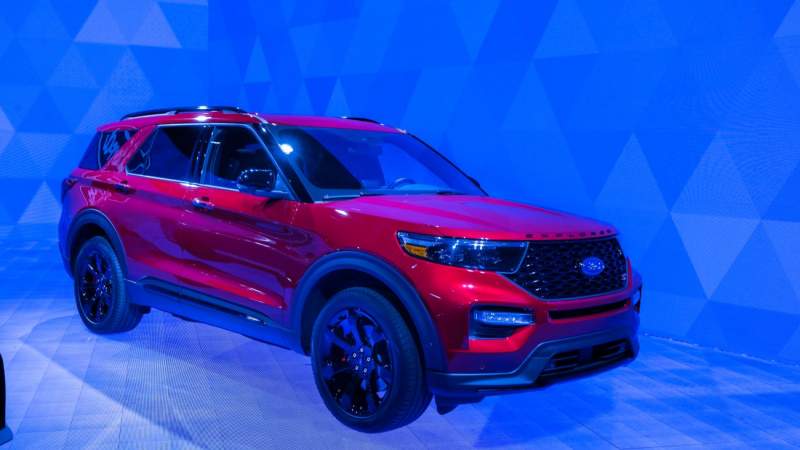