Some of us hold onto our cars forever. In some respects, you should be applauded if you do. Studies show that the longer you drive a car without payments, the further ahead you are financially. You probably know at least one person driving around in an extremely old car that has more than 300,000 miles on it. Everything squeals and it’s covered in rust. But hey, it still runs!

However, even the sturdiest of vehicles will eventually wear out. There’s a tipping point where it becomes impractical to keep them running. When you reach this stage, common sense needs to kick in. You will need to accept that it’s time to purchase another car, whether brand new or a slightly used vehicle. Here are eight signs that it’s time to let your old car go and buy another one.

The occasional breakdown on an older vehicle is to be expected. Paying for needed repairs every once in a while is reasonable. However, when a car starts breaking down with increasing frequency, it’s likely time to start thinking about replacing it.

As a general rule, you don’t want to experience more than two breakdowns a year. By that, we mean incidents that prevent the car from being driven and require major, costly repairs. We’re not talking about having to replace the windshield wiper blades or the air filter. We’re talking about replacing radiators, exhaust systems, and fixing major engine malfunctions. If you get to a point where your car is breaking down every few months months, then you’ve got a serious problem on your hands.

The Interior of the Car Starts Crumbling

Former U.S. president Barack Obama likes to tell the story of driving a car in college that was so old and rusted that passengers could literally look through the floor while driving. Imagine cruising down the highway and seeing the pavement whizzing by underneath the vehicle. Passengers in the car, including his eventual wife Michelle, had to be very careful about where they placed their feet.

Something like that is a clear sign that your car needs to be replaced. When the interior of your vehicle begins falling apart, the car is no longer salvageable. We’re talking here about holes in the floor, ripped and torn fabric, knobs falling off, or windows and sunroofs leaking water. If being inside the car feels like a hardship, then chances are you need to head to a dealership as soon as possible.

We’ve all heard the term “rust bucket.” It describes an old, ugly, and falling apart vehicle. This terminology exists for a reason. Many people will continue driving their car even when it’s in truly unsightly condition. While you may be oblivious to how the car looks parked in their driveway or cruising down a highway, chances are that friends and family are all too aware of how bad it really is.

You may find that your family and friends are embarrassed by the car you drive. Or too ashamed to be seen in it. Or even be seen in the general vicinity of your piece of crap ride. Take that as a sign that you need to get a different car. No, rusted trunks and different colored car doors are not some hipster trend of owning a “well weathered” vehicle. You may be immune to your car’s appearance because you’ve had it for so long. However, trust us when we say that other people are embarrassed on your behalf.

The Car Will No Longer Pass Emissions Tests

Another clear sign that your car is outdated is when it no longer passes environmental emissions tests. Newer vehicles have been built with various “drive clean” technologies that make them a bit less damaging to the environment and atmosphere. Older models don’t have these technologies. Many of them won’t pass emissions tests that are required when you have to renew your license plates.

Some drivers spend a lot of money having new technology added to their vehicle, just to get it to pass. Depending on the age of the car, some vehicles are no longer even be allowed to take an emissions test. If that happens to you, then you may want to consider replacing your car entirely. Why continue to shell out big bucks just to barely squeeze out another passed test? Spend that money on a replacement instead.

The older your car, the less fuel efficient it will be. Every year, a new crop of cars come out. Each new class is a little more fuel efficient than the previous year’s models. If you’re driving a car you bought in the early or mid-1990s, chances are you’re spending a lot more time at the gas station than your neighbor who’s driving a 2016 Toyota Prius.

While you might be free of those annoying monthly car payments by now, all those extra trips to the gas pumps add up. Your cost to operate the vehicle is still quite substantial. It depends on how many miles you drive a week, of course. Regardless, if you find yourself at a gas station more than two times a week, then you’re probably spending too much money on gas. You should consider upgrading to a vehicle built in this decade.

The Cost to Insure the Vehicle Keeps Rising

It’s a fact. Older cars are more expensive to insure. Newer cars are built with a host of safety features that are not available in older models. Even if you have a spotless driving record, you might start to see your premiums creeping up as the car ages. This is especially true if you use the car to commute to and from work.

Paying attention to the insurance premiums on your car is just as important as the other costs associated with operating the vehicle, such as gas and repairs. You don’t often think of your monthly insurance premium, but you should. It can be more expensive than you realize.

Safety is Becoming an Issue

No matter how well maintained your car is, eventually it will become unsafe to operate. Your car will inevitably become unreliable and prone to breaking down at dangerous times. You don’t want your car to suffer a major malfunction while driving down the highway. To make matters worse, older cars don’t have many of the advanced safety features that are found in newer models. We’re talking about things like side airbags, electronic stability control, rear view cameras, blind spot monitoring, automatic braking, and forward collision alert.

It could be argued that many of these advanced safety features are optional. However, it can also be argued that you shouldn’t be driving your car if the muffler might fall off when you hit a pothole. If you (or your passengers) have a general feeling of uneasiness when riding in your vehicle, than it’s time for an upgrade.

Repairs Cost More Than the Car is Worth

The tried, tested, and true sign to replace an old car is when the repairs cost more than the damn thing is even worth. If you need to spend $2,000 for an engine repair, but the car is only worth $500, you need to reconsider. It would be foolish to pay to have the vehicle fixed.

You can also do the “tire test” on your old car. When it comes time for a new set of tires, ask yourself if your car is worth the cost. If the answer is no, than you should save your money for a new car. You know, one that will also include newer tires.

This test is a practical way to tell whether you should keep rolling in your old beater. It simply comes down to dollars and cents. There can be no arguing with the math involved. If the repair bills on your old car are getting more expensive, you’re unlikely to see much a return on your investment. Sure, you might get six more months of driving before another major problem pops up. Then what? Sink even more money into your sad sack of lug nuts? Break the cycle and send that junker to the scrap heap. 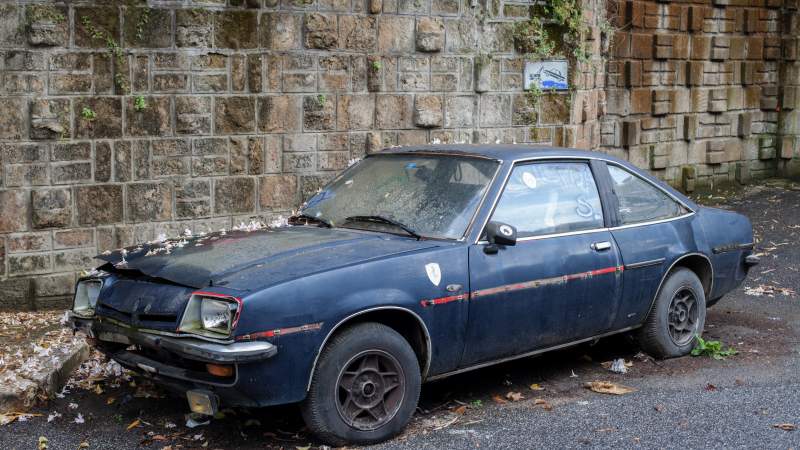