Past and Future, Trending

Formula 1 Announces Plans to Be Carbon Neutral by 2030

Formula One is going green.

The Formula One Group, which operates the popular global motorsport, has officially released its first ever “sustainability plan.” The plan sets the ambitious goal of having Formula One (F1) produce net-zero carbon emissions by 2030. This responds to a longstanding criticism that the international race circuit is a massive polluter and heavy user of gasoline and diesel resources.

The plan, unveiled at the Mexican Grand Prix, comes after a year’s worth of research. In it, F1 states that its 2019 emissions are likely to be 256,551 tons of carbon dioxide. That would be the equivalent to your daily drivers using 28,868,122 gallons of fuel in a year.

By 2030, F1 says it will achieve net zero carbon emissions from its race cars, as well as through more efficient travel by race teams, renewable energy powered facilities (such as factories and team offices), and carbon dioxide sequestration programs. You can read the entire report right here.

Current race car engines are to be redesigned into net zero-carbon power units. BY 2021, 10% use of biofuel will be mandatory in all F1 cars. It is expected that with improved engine efficiency and the development of synthetic fuel that uses carbon capture, the proposed targets will be reached.

The Cars Aren’t The Problem

However, the biggest contributor to the carbon emissions produced by the sport is the air travel on which race teams and drivers depend. There are normally 21 races a year in F1. In 2020 there will be a record 22 total events. Nine of them are in Europe with the remaining 13 spread across the globe from Australia to the United States and China. Less than eight percent of F1’s carbon footprint comes from the actual race events.

Of F1’s total emissions, 45% come from “logistics.” They define that as air, sea, and road transportation required to put on each race. A further 27% comes from the transport of personnel within the sport and its promoters and partners. Another 19% comes its facilities and factories. F1 has yet to release a detailed plan on how it will actually implement its sustainability plan, saying that those details will come with time. However, it’s certainly a step in the right direction for the world’s biggest automotive racing body. 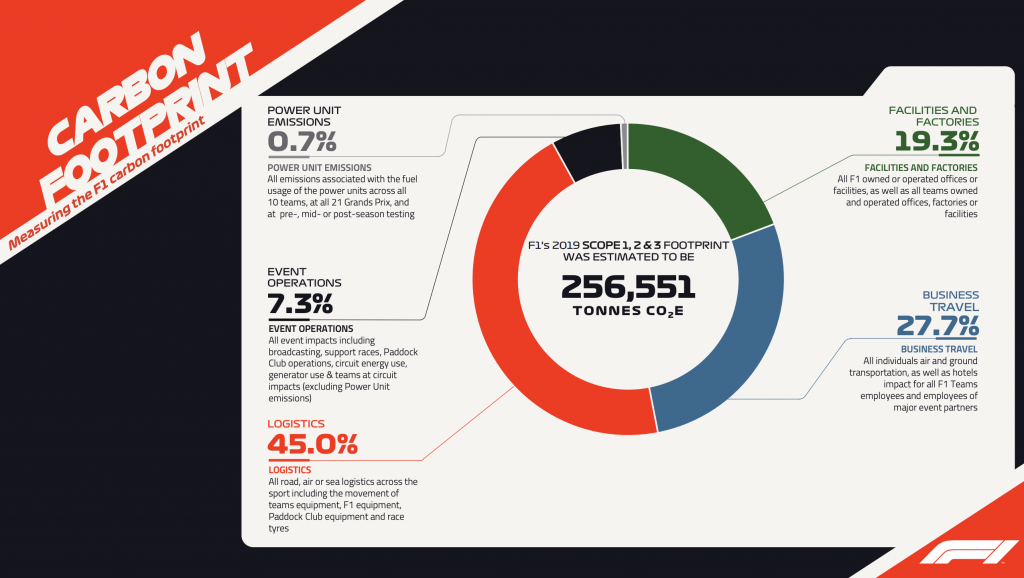