After 17 years, Ford is bringing back the Mustang Mach 1 fastback coupe. This week, they revealed how much of your hard-earned dough you’ll have to part ways with to own one yourself. You can now place pre-orders for the Mustang Mach 1 for a starting price of $52,915. That pricing slots the Mach 1 right between the GT and the previous GT350.

The Mach 1’s engine produces 480-horsepower and 420-pound feet of torque. It also has an intake manifold, oil-filter adapter, and engine oil cooler. The Mach 1 will come standard with a six-speed manual transmission. However, there’s also a 10-speed automatic transmission available for an additional $1,500.

It might be more fun to get the Handling Package, though. It adds wider wheels, a downforce front splitter, and a swing spoiler with a Gurney flap. There’s also exterior styling borrowed from the Shelby GT500. In track tests, the Mach 1 hit 60 mph in just 4.3 seconds. Ford didn’t reveal the price 0f the Handling Package.

The limited-edition Mach 1 is also equipped with the previous Ford GT350’s front and rear subframe with stiffer bushings, as well as a rear-axle cooling system, rear toe link, and diffuser.

The Mach 1 has an optional appearance package that includes black side and hood stripes with reflective red, white, or orange accents. The car will also be available in “Fighter Jet Gray” that is exclusive to the Mach 1, according to Ford. Other available colors include silver, black, white, blue and red.

How To Get One

For starters, it won’t be easy.

“There will not be enough to meet demand,” said Berj Alexanian, Ford Mustang spokesman. “Mach 1 is going to be the most track ready V-8 Mustang right off the factory line. For Mach 1 to be gone for so long, it’s not only built up excitement but also expectation.”

Ford didn’t reveal exactly how many Mach 1s they are planning to make. There’s also no online ordering or reservation system. You’ll have to call your local Ford dealer and place your order the old fashioned way. And then you wait. Deliveries of the Mach 1 aren’t expected to start until Spring 2021. 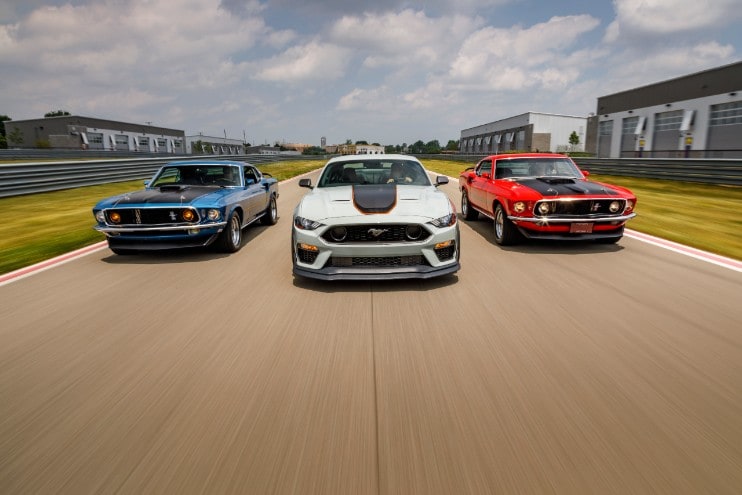