Ferrari doesn’t measure their sales figures in the tens or hundreds of thousands. As the producer of high-end, luxury performance supercars, their sales market is a little more limited than your average family sedan or SUV. However, the Italian icon disclosed this week that they set a personal record in 2019. For the first time in company history, Ferrari sold more than 10,000 cars.

The exact figure was 10,131, which is up from the 9,251 they sold in 2018. Ferrari also announced $771 million (699 million Euros) in net profits, up eight percent from the previous year. Even more remarkable, perhaps, is that Ferrari managed this growth without releasing an SUV model.

Yes, the Ferrari SUV is coming eventually. But competing brands like Aston Martin, Lamborghini, and Bently have already jumped on the SUV bandwagon. Being late to the party doesn’t seem to be having any negative impact on Ferrari’s global sales.

While Ferrari doesn’t sell an SUV yet, they are adapting to the future. Last year marked the debut of a Ferrari hybrid car, the F90 Stradale. There were four more brand new models in 2019. The company promises a handful of other new cars before 2022.

The strategies of CEO Louis Camilleri are paying off. Ferrari stock is up more than 40% since he took over in July 2018. The company seems poised to be a bit less exclusive in the future, and the sales figures are slowly backing that idea up.

Do you love Ferrari vehicles as much as we do? Check out this list of ten things you (probably) didn’t know about Ferrari.

Legendary and iconic car maker Ferrari celebrates its 70th anniversary in 2017. It was back in 1947 that the very first Ferrari race car was produced. Founded by Italian race car driver Enzo Ferrari, the company has since gone on to become one of the leading high-end car manufacturers in the world.

Today, Ferrari is the world’s most powerful brand according to Brand Finance. The most expensive car ever sold was a 1962 Ferrari 250 GTO, which was bought for $35 million by American communications magnate Craig McCaw back in 2012. Getting to that vaunted position was not an easy journey for Ferrari, though. Here are 10 amazing facts that you likely didn’t know about Ferrari.

Today you can buy a Ferrari in a few different colors, such as bright yellow, black, or metallic grey. There still isn’t a huge selection to choose from, though. Of course, the most iconic color for a Ferrari is still red. In fact, most diehard collectors feel that the only true color for an iconic machine like a Ferrari is their trademark red. Any other color is sacrilege.

Today, 45 percent of Ferraris sold are red. What you may not know, though, is that originally all Ferraris were made red. There was no other color choice in the beginning. The official name for the red paint is “Rosso Scuderia.” While that color may be synonymous with the Ferrari brand these days, it was never a brilliant marketing scheme or anything. Red just happened to be the color that the International Automobile Federation assigned to all Italian grand prix race cars in the early years of auto racing.

So basically the fact that Ferrari produced Italian race cars determined that they be painted red, and the rest was history.

Ferrari has become such an international brand and global symbol of wealth and prestige, that marketing and merchandising the company’s name and logo has turned into big business. Each year, Ferrari sells about $1.5 billion of merchandise at retail outlets worldwide.

Designed and manufactured at 30 offices worldwide, Ferrari merchandise includes clothing, watches, sunglasses, shoes, mobile phone covers, and, of course, scale models of the cars. A lot of this merchandise is anything but cheap. A model of the coveted Ferrari F14T at 1:8 scale costs $5,400. Ferrari sunglasses retail for more than $200. It all adds up and helps to make Ferrari one of the most valuable automotive companies in the world.

The oil rich Arab world loves Ferrari. In fact, more Ferraris have been sold in Arab countries than in any other place on Earth. The cars are worshipped by the wealthy ruling Arab class as the ultimate driving and status symbol. So it’s not surprising that Ferrari opened its first theme park, called “Ferrari World” in Abu Dhabi back in 2010.

Touted as the world’s largest indoor theme park, it boasts four roller coasters, including one inspired by F1 racing that happens to be the fastest coaster in the world at nearly 150 miles per hour. People over the age of 21 can even drive the Ferrari California on the streets around Yas Island, where Ferrari World is located. Ferrari World is now in the process of building the steepest steel roller coaster in the world.

Ferrari started as a company that produced a small number of professional race cars, and has clung to that heritage throughout its history. Since its first professional win in 1947, Ferrari has taken home more than 5,000 trophies over the decades.

Enzo Ferrari was always ambitious and dreamed of starting his own company, even at a young age. After beginning his racing career as a driver for Costruzioni Meccaniche Nazionali in 1919, he quickly jumped ship to Alfa Romeo, where he would be appointed head of the Alfa Corse racing division.

In 1939, Enzo Ferrari finally had the resources and confidence to strike out on his own and start building his own cars (though he had to agree to not use the name “Ferrari” for four years as a condition of his release from Alfa Romeo). In 1940, Enzo produced two 815 Auto Avio Costruzioni cars, though these vehicles were not official Ferraris.

The full launch of Ferrari as a company was delayed by the outbreak of World War II. In fact, Ferrari’s factory in Maranello, Italy was bombed by Allied forces in 1944 and again in 1945. After these setbacks, Enzo was able to get the company back on track and the first official Ferrari car, the V12 125 S, which debuted in March 1947, two years after the war had ended.

5. Only Two Models of the Very First Ferrari Were Produced

While the very first Ferrari, the 125 S, turned heads immediately when released, the company didn’t actually start mass-producing cars at the time. Only two 125 S Ferraris were ever manufactured in 1947. The car made its competitive debut at the Piacenza Circuit that year, driven by Franco Cortese. Enzo Ferrari would later call that race “a promising failure” after fuel pump issues forced the Ferrari team to abandon the race while they were in the lead.

Despite the inauspicious racing debut, and the fact that only two 125 S Ferraris were produced, the car still became a legend. It won the Rome Grand Prix later in 1947 and went on to win a total of six victories in a total of 13 races. Sadly for auto historians (and the rest of us), the two 125 S Ferraris that were produced were not preserved. Instead, Ferrari dismantled both cars and used their parts to make the company’s next models.

Enzo Ferrari was born in Modena, Italy in 1898. Although he built the Ferrari brand into a juggernaut and traveled the world with his racing team, he remained extremely close to his hometown and the nearby Maranello, Italy.

The original Ferrari manufacturing plant was in Modena, where Enzo Ferrari lived all his life. Today, Ferrari’s global headquarters are a stone’s throw away in neighboring Maranello (less than 20km apart). That’s also where the Ferrari museum is located. For the residents of Modena and Maranello, Ferrari helped to put them on the map. Today, people from around the world visit those Italian locations just to see the Ferrari operations and museum.

According to a recent filing with the U.S. Securities and Exchange Commission, the parent company of Ferrari is now known as Fiat Chrysler Automobiles. Today, the Ferrari family receives very little of the proceeds from all the Ferrari sales and branded merchandise, which is worth billions of dollars annually.

2. The Logo Was Inspired by a WWI Flying Ace

The prancing horse that is Ferrari’s iconic logo is actually a nod to Italian World War I flying ace Francesco Baracca, who died in action in 1918. In 1923, Enzo Ferrari met the Count and Countess Baracca, the parents of the famed World War I pilot, after a race.

Legend has it that Baracca’s parents suggested that Ferrari adopt their son’s “prancing horse” logo that had been painted on the sides of his airplanes for his then-fledgling racing team. They claimed it would bring Ferrari good luck. Nine years later, Alfa Romeo (the team that Enzo raced for) allowed Ferrari to put the logo on his car for the 1932 Spa 24 Hours race, after Enzo repeatedly pestered executives about it. The yellow shield was added to the logo in honor of Enzo’s hometown of Modena.

1. You Can Customize Any Element of a Ferrari

A big part of Ferrari’s success as a car company comes from its customization. Owners of the iconic sports cars love that they can customize any element of a Ferrari they purchase. And we really do mean any element.

The company’s “Tailor Made” program allows buyers to personalize every component of a Ferrari. This experience happens at the Ferrari factory in Maranello, Italy, where buyers can choose everything from interior trims and finishes, to various accessories and the tire treads. Once a buyer makes all of these choices, they can expect it to take up to two years to receive their custom car.

Famous celebrities such as musician Eric Clapton and golfer Ian Poulter have created their own custom-designed Ferraris, as have many other wealthy people with extra money lying around. 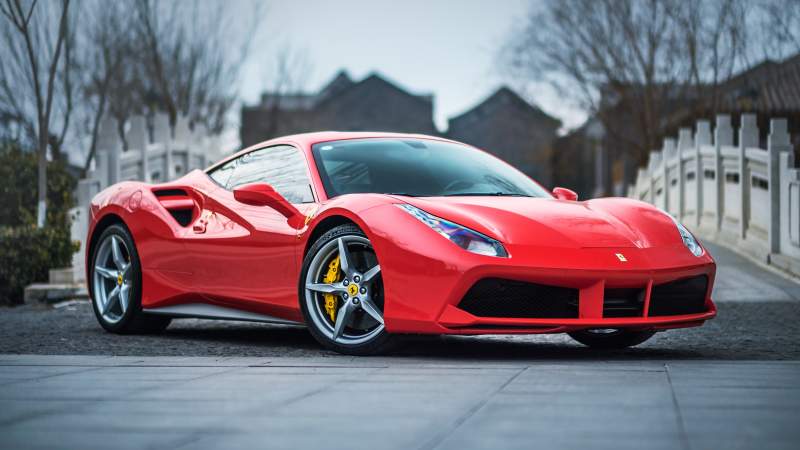