Everything You Need To Know About The 2019 Ford Raptor

If you need a serious truck — and we mean a serious truck — you’re probably looking at the Ford F-150 Raptor edition. This thing isn’t built for hauling the family boat or moving loads of firewood. You can get a regular F-150 for those tasks. No, the Raptor edition was first introduced in 2009 to be a dedicated off-road vehicle, with a high-powered engine and some of the beefiest parts in any truck, anywhere.

The brand new version carries on that tradition of toughness, as the 2019 Raptor will be the same beast as always, with a bunch of notable upgrades and new features.

The Raptor has been around for almost a decade now, and it’s become synonymous with rough off-roading. It originally sold for $42,000 back in 2010, complete with a variety of impressive new features like an Off-Road Mode and a 8,000 pound towing capacity. It was originally powered by a 5.4L V8 engine (with more powerful options available). The truck has only gotten better over time.

The new Raptor isn’t a huge upgrade over the 2018 version, but it could be considered a huge upgrade over your average pickup truck. Designed to go fast and any sort of rough or uneven terrain, the 2019 Raptor brings everything you’ve come to expect from Ford’s most robust pickup model. A smarter shock system will give the driver even more control, there’s an all-new Terrain Management System, special Racaro seating (a first for the Raptor), and it even comes in a new color — Ford Performance Blue.

The Raptor is likely to continue using the 3.5-liter EcoBoost turbocharged V6 engine, with Ford’s automatic 10-speed transmission, complete with Tow Mode, EcoSelect, and Sport Mode. There doesn’t appear to be an option to buy it with a diesel engine, which shouldn’t be a real shock since previous models of the Raptor haven’t included a diesel option either. If you insist on diesel, Ford makes other rugged trucks with that option.

Previous versions of the Raptor included an option for an orange interior. That’s gone (for now), with new options including the standard black or a brand new Light Speed Blue, which is a color scheme borrowed from the Ford GT. The upgraded interior includes sporty Recaro seats and carbon-fiber trim throughout, including on the doors, dashboard, and shifter.

Along with Ford Performance Blue, the Raptor is available is two other new colors as well — Velocity Black and Agate Black (and retiring the options of Lightning Blue, Avalanche, and Shadow Black). While purely cosmetic, the front grille features a bold FORD badge in 3D letters across the front, and a similar version on the back tailgate.

The wheels come with a few different options, including the standard 17-inch rims with 35-inch tires. You can upgrade them to beadlock-capable wheels or order a ring set from Ford Performance.

Like any modern vehicle, Ford packs a ton of expected safety features into the new Raptor. Previous versions of the Raptor have been rated 5-stars by the National Highway Traffic Safety Administration (NHTSA) and gotten good reviews from the Insurance Institute for Highway Safety (IIHS). It comes with standard front and side airbags, and is fully compatible with any child seat (front or rear facing). There is a full-size spare tire included and rear-parking sensors, although some of the fancier safety features are not included standard.

In addition, drivers have the added safety of riding in a higher vehicle built with rugged parts. You don’t need to be a rocket scientist to conclude that driving a massive, tough, steel truck is typically going to be a little bit safer than driving a tiny sedan made out of aluminum and plastic. We’re not knocking small cars or anything — just stating the obvious.

The Raptor is built specifically for anyone who regularly takes their truck off the luxury of paved roads and highways. The 2019 version will continue to use special shocks from Fox Racing, just like previous versions, and switches to an electronically controlled line-valve shock system with infinite compressions for continuous damping.

The architecture of the suspension is otherwise unchanged, with the same control arm and bushings as older models of the Raptor. Ford has added front ride height sensors into the body of the truck, to go along with sensors in the body and suspension, in an effort to electronically create the smoothest ride possible on rough terrain.

The Raptor will also have Ford’s new Trail Control system available, for careful low-speed off-roading. This is extra useful for driving over incredibly rough or steep terrain, as the system will automatically adjust things like engine power and brake pressure (to each wheel individually) so that the driver can focus on steering and the rough road ahead.

Similar to other Ford trucks and SUVs, the 2019 Raptor comes with the company’s “Terrain Management System” — a system that allows the driver to select between Mud, Snow, and other modes depending on the outside conditions. In addition, the Raptor has a built-in system that will adjust for those things automatically. The technology in the truck will read the terrain and send the proper signals to the dampers, shocks, and wheels. The result is more precise control of the vehicle, regardless of the situation. For example, the shocks will automatically get stiffer in certain conditions to avoid the truck bottoming out. Loud Pedal mode recognizes an aggressive throttle, and stiffens the shocks to brace for potential impact. This doesn’t require any input from the driver, as the truck’s built in tech will control these things automatically and instantaneously.

Like most cars, you can add a bunch of extra features to the Raptor if you don’t mind the cost increase. The 2019 Raptor has optional heated seats, heated steering wheel, 360-degree camera with split-view display, Blind Spot Information System and cross traffic alerting, an 8-inch LCD Productivity Screen in the instrument panel, and upgraded stereo equipment. 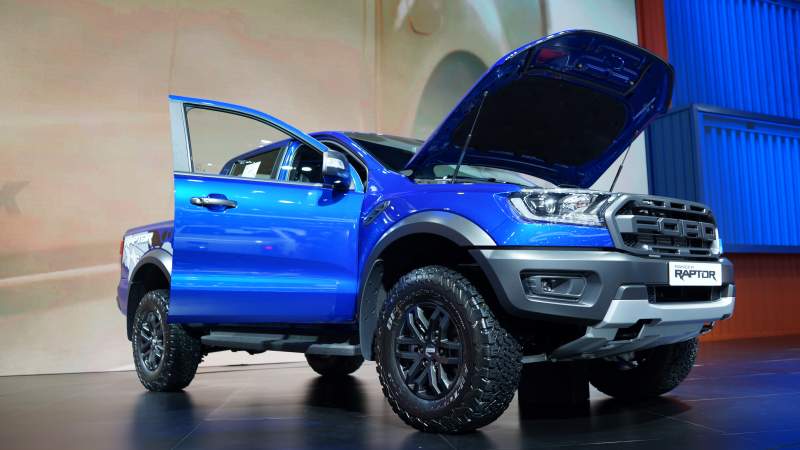