Everything You Need To Know About The 2019 Ford Ranger

After eight long years, the Ford Ranger model is returning to the North American market in 2019! The truck branding was given its own model by Ford in the 80s, but was discontinued in 2011 in favor of other rugged truck models. Now it’s back, and it could potentially be better than ever.

If you’re feeling nostalgic about the old Ford Ranger models, or are just in the market for a new pickup, this article will break down everything you need to know about the 2019 Ranger. This isn’t your parent’s Ford Ranger, as the new version is quite different than previous editions, both in size, quality, and the extra bells and whistles.

When Ford ceased production of the Ranger in 2011, they insisted that the market for a compact pickup truck in North America had all but dried up. They felt buyers either wanted a full-size pickup, in which case they could buy an F-150, or they wanted a SUV or SUV Crossover, of which the Ranger was neither. However, they’ve been forced to watch competitors like GM and Toyota achieve great success with their compact and mid-size pickup models in the meantime, forcing them back into a market they thought didn’t exist.

The new Ranger was designed in Australia, but will be built in Michigan. While the most rugged and work-oriented buyers will still probably prefer a full-size pickup, the new Ranger is going to be aimed at young professionals. They might not need a truck to drive to the office everyday, but they will definitely want to throw their camping or kayaking gear in the truck bed and escape for a weekend adventure!

The Ranger is a five-passenger midsize pickup, available in supercab or supercrew formats (there is no two-door option). Exact dimensions aren’t available yet, but the international version of the truck is 201 inches long, 73 inches wide, and 71 inches high.

The wheelbase is 127 inches and the ground clearance is roughly nine inches. It will sit on a steel frame (not aluminum), with a solid steel front bumper and frame mounted tow-hooks.

The 2019 Ranger comes in three different versions (more on that later), but just a single engine option. A 2.3-liter twin-scroll turbocharged four-cylinder engine, similar to the one currently used in the Ford Explorer, will sit under the hood. It features Ford’s EcoBoost technology to increase fuel efficiency, and a new 10-speed automatic transmission (there won’t be a manual option). The exact specs of the engine are currently unknown, but the Explorer gets 280 horsepower and 310 lb-ft of torque with roughly the same size engine.

However, the automaker likely isn’t rushing to market a diesel truck, since they are currently involved in a lawsuit over their emissions reports relating to the F-250 and F-350 diesel trucks. There’s also no mention of the new Ranger having a hybrid gas/electric option, even though Ford has pledged to put an increased focus on electric autos in the future.

The interior of the new Ranger promises to be stylish and roomy (or extra roomy, if you get the SuperCrew version). It features sleek horizontal elements that make the cab feel nice and wide. The gear shifter sits between the two front seats, and many of the most common button controls are embedded on the steering wheel. In addition, the Ranger features a waterproof storage section underneath the back seats — a great place to store wet bathing suits or soggy fishing clothes after a day of adventuring.

As mentioned before, the frame is made of steel and is fully boxed. Six cross members provide additional strength and support. A double A-arm front suspension and monotube front dampers will beef up the suspension, while the usual leaf springs and shock absorbers will control a completely solid real axle. The length of the truck bed depends on what cab model you want.

Like most new vehicles, the Ranger comes with a collection of standard safety features, like airbags, seatbelt pre-tensioners, and a collapsible steering column and pedals that will reduce the chance of an injury to the driver in the unfortunate event of an accident. It also has tire pressure monitors and a Thatcham Category 1 security system and car alarm.

Blind-spot detection (which can be set to also cover anything you’re towing), pre-collision assistance, lane drift warnings and assist, and emergency braking are also available on select packages. You can also include a rearview camera and reverse sensing system.

If you are the kind of person to be towing a trailer, boat, or whatever else behind your Ranger, the new version can also include Trailer Sway Control, which will automatically detect if whatever you’re towing begins to “snake” around behind you, gradually reducing your speed to prevent a major disaster.

The technology inside our vehicles continues to expand and impress with every passing year, and the 2019 Ranger will be no different. An 8-inch centered touchscreen powers the infotainment system, which has various options like Apple CarPlay, Android Auto, Ford SYNC 3, and full navigation. There’s also the option to turn the Ranger into a full-on 4G LTE Wi-Fi hotspot, letting passengers connect their devices (keep an eye on that data usage though!).

The instrument panel features two LCD screens that will display all the pertinent information about the truck.

The truck comes in three different trim packages — the XL, XLT, and Lariat. These models get more luxurious — and more expensive — as they progress. There’s an available FX4 four-wheel drive system for off-roading or if you live in particularly nasty snowy conditions, complete with a status screen that will monitor the pitch and roll of the truck to ensure you don’t overdo it. It also comes with all-terrain tires with “aggressive tread patterns” for any non-pavement driving.

Other available options include Trail Control, a Terrain Management System (allowing you to select between normal, grass/gravel/snow, mud ruts, or sand modes), and a Electronic Locking Rear Differential — great for low traction surfaces and steep hills.

Ford has announced the starting price will be just over $24,000 for the base model. The highest level trim Lariat model starts at roughly $32,000, and goes up from there as you add optional packages and features. 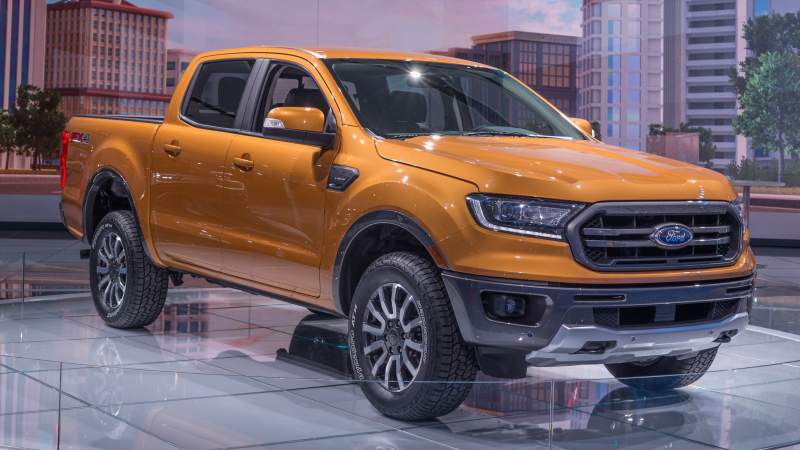