End of Decade Recap: The Coolest Hatchbacks of the 2010s

Though they often don’t get as much attention as they deserve, hatchbacks remain a wildly popular vehicle segment. They sell particularly well among young drivers and urban dwellers. Hatchbacks have come a long way over the past decade, with all-electric versions and sporty racing models dominating the marketplace. Even traditional gas-powered models typically have the best fuel efficiency in the class. That helps to explain, in part, their enduring popularity. Here is a list of the 10 coolest hatchback cars that helped to define the decade known as the 2010s.

The Toyota Yaris is a great hatchback for a number of reasons. It’s attractive in terms of price, fuel economy, and driving performance. For a $15,500 starting price, you can get yourself into a Yaris too. It’s been one of Toyota’s most popular cars over the past decade.

Although it’s compact, the Yaris remains a leading model when it comes to fuel efficiency. Its 1.5-liter four-cylinder engine produces only 106 horsepower. However, that helps to return 32 miles per gallon when driving within a city, 40 mpg highway, and 35 mpg combined. The U.S. Environmental Protection Agency says annual gas costs on the Yaris should not exceed $1,500. That’s amazing! Any way you look at it, the Yaris is a great hatchback for scooting around urban environments. It’s easily one the best hatchbacks of the last decade.

Another hugely popular hatchback produced by an Asian automotive titan is the Honda Fit. The Fit is the little car that could. Although the Fit is one of Honda’s oldest models, it remains one of its bestsellers. The Fit has been revamped twice over the last 10 years – in 2013 and again for 2020.

It remains one of the most efficient vehicles you can buy. The hatchback’s 1.5-liter four-cylinder engine is great one gas, getting 33 mpg in the city, and 40 mpg on the highway. It comes well-equipped at only $16,000 for the base model. Some of the Fit’s key features include a spacious interior, plenty of cargo room, an impressive amount of technology, and loads of standard safety mechanisms. In 2019, U.S. News named the Fit the “Best Subcompact Car for the Money” and the “Best Car For Teens.”

The Mitsubishi Mirage is a great deal. For $14,000, you can get a brand-new Mirage that is a blast to drive and offers fantastic fuel efficiency. Among hatchbacks, there are few that are as peppy and efficient Mirage. It has been a standout subcompact car throughout the 2010s.

That base price also gets you get a well-equipped hatchback that comes with cruise control, a driver’s seat height adjuster, 15-inch alloy wheels, heated front seats, and Apple CarPlay and Android Auto connectivity. The Mirage also comes with a 10-year, 100,000-mile powertrain warranty. Its 1.3-liter engine produces only 78 horsepower, but offers best-in-class fuel economy. Sure, the Mirage doesn’t come with arm rests, but you can’t have everything, right?

The Toyota Corolla is both a popular sedan and a hatchback. For this article, we obviously recommend the hatchback version. While a little more expensive then previously mentioned hatchbacks at $20,000, the Corolla has a lot going for it. Highlights include LED headlights, automatic climate control, a leather-wrapped steering wheel, a 60/40-split folding rear bench seat, Bluetooth, a WiFi hotspot, an 8-inch touchscreen infotainment system, a six-speaker audio system with two USB ports, Apple CarPlay/Android Auto, and Amazon Alexa compatibility. That feature list packs a punch!

Safety features include adaptive cruise control, forward collision warning (with pedestrian and cyclist detection), automatic emergency braking, and lane keeping assist. The Corolla hatchback is also a lot of fun to drive and has decent fuel economy. This hatchback has been a critical and consumer darling for many years and its reputation only seems to grow with age.

Here comes some sporty style! The Honda Civic Type R is a super cool hatchback and a preferred vehicle among street racers. Not that you should ever race in the streets, of course. With incredible performance and a top-notch engine, the Civic Type R shocks everyone who drives it.

While some regular drivers couldn’t care less about these performance metrics, this extraordinary hatchback wasn’t built for the faint of heart. Its fun-to-drive nature and 306-horsepower turbo engine makes it one of the best hatchbacks on the market for the driving enthusiast. The Type R is clearly one of the very best hatchbacks of the decade. It has been featured in numerous movies over the last decade, including the Fast and the Furious franchise.

The Volkswagen Golf remains one of the most popular hatchbacks in the world. So much so, that it’s often the first car that comes to mind when people say the word “hatchback.” At a base price of $18,000, the Golf continues to attract plenty of buyers.

Rapid acceleration, fantastic cargo space, and a stylish interior that boasts a number of high-tech components put the Golf in a class of its own. It has seating for five people, and manages to keep even the rear occupants relatively comfortably — a tough ask for some smaller cars. It’s available in two- or four-door version, making the Golf an appealing option for many.

It comes standard with a turbocharged four-cylinder engine and a five-speed manual transmission. The fuel economy is right where you expect it. With 52.7 cubic feet of overall cargo room, the Golf has one of the largest cargo capacities of any hatchback. A five-inch touchscreen audio system and Bluetooth are impressive standard features. The Golf has only grown in esteem since 2010, easily making our all-decade list.

Look past its small size. You’ll quickly find in the Fiat 500 Abarth one heck of an enjoyable ride. Make no mistake, the 500 Abarth is a city car that loves to rip and snort its way down country roads too. With the exception of a much more expensive sports car, you’re not going to find an exhaust note that comes close to the sound you get in this Abarth. Not even Fiat’s 124 Spyder sounds as great as the Abarth when the engine is humming.

While this is still a compact car, it’s  capable of producing 160 horsepower from its robust 1.4-liter engine. The Abarth is like a mini Ferrari. If that’s insane, you simply haven’t driven one yet. For zipping around the city and tooling around in the country on weekends, the 500 Abarth is amazingly fun to drive. It remains more popular in Europe than North America, but this hatchback has been catching on stateside in recent years. The 500 Abarth definitely earns its place as one of the best hatchbacks of the 2010s. It may very well be on similar lists ten years from now too, when the 20s get recapped.

For a smaller, peppier car that’s still extremely safe, it’s hard to beat the Mazda 3. Rated as the No. 1 hatchback multiple times by U.S. News, the Mazda 3 delivers on performance, style, and fuel economy. The redesigned dashboard has received praise, as have standard features like a rear view camera, Bluetooth, push-button start, high definition radio, smartphone app integration, and the “Mazda Connect” infotainment system that comes with a seven inch touch screen.

If that weren’t enough, the cargo room in the Mazda 3 hatchback is superior to all other cars in this class. It has excellent safety ratings and crash test performances, earning numerous safety awards. The Mazda 3 is the perfect first car for young drivers. It provides some of the thrill of driving, but gives worried parents that peace of mind when it comes to safety and reliability. The Mazda 3 remains hard to beat.

A hatchback in every sense of the word, the Chevy Sonic is a small car that packs a lot of power.  The bottom line is that it’s really fun to drive. A brand new Sonic is among the cheapest hatchbacks you can buy, with a $15,000 base price. With fold down backseats, 4G LTE WiFi, and award-winning safety features (that include 10 airbags), it’s easy to see why critics have been singing the praises of the Chevy Sonic all decade long.

The Sonic is also available in a racing package that includes a 1.4 litre turbocharged engine, six speed manual transmission, aluminum sport pedals, and lower suspension. That model runs closer to $20,000 though. The Sonic is a contemporary classic in the hatchback universe. It has great technology, including forward collision alert, lane departure warning, and rear vision camera – all standard. The Sonic is a defining hatchback of the last 10 years.

There are a lot of all-electric hatchbacks that we could single out on this list. However, the one that tops them all is the Nissan Leaf. With its 2019 edition, Nissan expanded the Leaf’s range. It can now travel up to 226 miles on a single charge. That’s a hefty increase from the former 150 mile maximum range. That additional 76 miles is a big improvement for the Leaf, which has long been the electric vehicle of choice among Millennials who tend to keep their driving within city limits.

The Leaf remains a little electric car that has big aspirations. As technology improves, greater driving distances will be possible. This Leaf also makes it easy for people to be green, combining a roomy interior and loads of cutting-edge technology.

The base Leaf has a nicely appointed interior, with room in the back seats for two adults. It offers a comfortable ride and a cabin that is quiet at any speed. Available technology includes Apple CarPlay and Android Auto, adaptive cruise control, and Nissan’s ProPilot Assist suite of driver-assistance features. With its many features, impressive driving range and green pedigree, the Nissan Leaf gets the nod as the coolest hatchback of the 2010s. 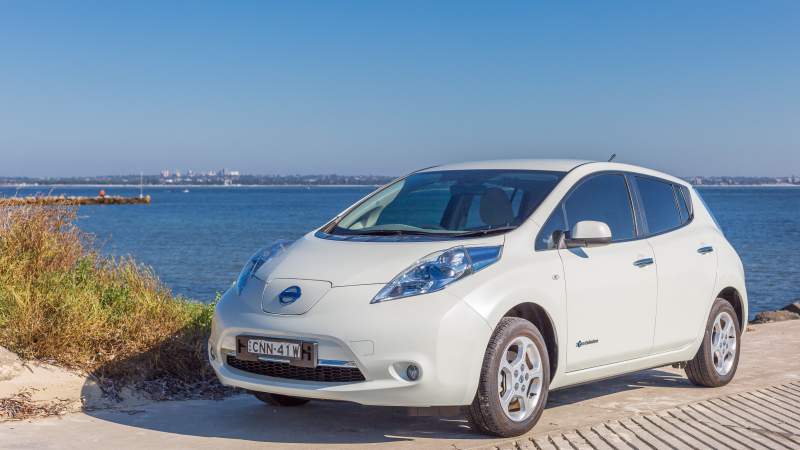