Don’t Fall For These Tricks Used By Sneaky Car Salesman

Car salesmen have a bit of a bad reputation. In some cases, it’s for a good reason. Many of the stereotypes about car salesman being slick, fast talkers who play games with customers in an effort to separate them from their money are true. They earn money based on sales commissions, so you can understand their motivation to close deals. The fewer cars they sell, the less money they earn. They are under tremendous pressure to move the cars off their lot.

They have a number of subtle sales tricks. Glossing over defects with the cars, pushing people to expensive upgrades and extended warranties, or convincing you that a long-term payment plan is best for everyone (spoiler alert: it’s probably not). Fortunately, you can defend yourself against these tactics with a little knowledge. Here are ten tricks that car salesmen use when dealing with the unsuspecting public. Don’t fall for them.

They Lie About What’s Available to You

Here’s the first thing you should know. Most car salesmen are focused on one thing: getting rid of the cars on his lot. Winding down the inventory, as they say, is job number one. This means they want to g definitely want to sell you a car they already have on hand. They do not want to scour the surrounding area trying to find you the car that you like, but in another color. Or maybe with a sunroof.

So, salesmen will often lie about what’s really available. You’ll hear statements like, “Sorry, that one isn’t available in red.” Or maybe, “we checked the database, but there’s no model with the sunroof option currently for sale in the state.” Don’t believe them.

If you persist, they might magically find what you’re looking for. Unfortunately, it comes with a hefty additional transport fee. The extra cost is ridiculously high, because they want you to balk. Suddenly, you don’t mind driving a blue, sunroof-less vehicle. And you’re in luck, since that model is just sitting in the lot, waiting for you take her home.

Every car lot uses advertising to draw people in. Maybe you’ll hear about a great clearance price on last year’s models, which have to be sold immediately. Or an accidental overstock on brand new models that just arrived, and have been marked down to get rid of them. Sounds like a good deal, right?

You head down to the dealership only to be told that you juuuuuuust missed the great deal. They sold out fast! But not to worry, the salesmen would be happy to show you some other models. Of course, they aren’t going to be quite as cheap of those advertised deals. It sure is a shame you missed those!

In the sales game, this is known as the “bait and switch.” Draw customers in with an incentive like a low price on a particular vehicle, and then inform them the advertised car is not available when they arrive. Then push them to a more expensive ride. This is a particularly insulting sales tactic.

By law, any dealership that is selling a pre-owned vehicle has to disclose its history. This includes whether the car was in an accident, a fire, or submerged under water for any length of time. The history of a vehicle is tracked when the car’s title transfers hands whenever it’s re-sold.

However, some shady used car dealers get around this requirement. They can muddy the waters around a car’s title by engaging in what is known as “title washing.” This is when cars are shipped to other states, where records of a vehicle’s history are not as easily available. Many used cars have been shipped from state to state so frequently, that tracking down their history can be almost impossible. Websites such as CarFax and AutoCheck can help in some cases. However, it’s always advisable to buy a used car whose title and history you can readily access yourself.

Every salesmen will try to push you to buy add-on features. They want you to pay more for heated seats, a trailer hitch and towing package, or a DVD player. So what happens if you refuse, insisting you’re more than happy to buy a basic model?

In a lot of cases, the salesmen will try charging you for basic features that actually come standard. It may sound laughable, but many buyers have been charged extra for things such as floor mats or head rests. Unethical salesmen will just put these charges on the bill of sale, without mentioning them. If you don’t notice, it’s your fault. You should always read the sales documents carefully. Squint to see the fine print, if you have to. You’d be surprised at what charges might be hiding.

You’ll hear lines  like “If I can get you into this car for $500 a month, would that work for you?” Of course, it would. However, what you’re not paying attention to is the length of the payment plan, the interest rate you’ll be charged, or how much money you will actually have spent when the car is finally paid off. Sure, you can afford $500 a month. However, by the end of an eight year financing term, that $35,000 car actually cost you $48,000. Not such a great deal anymore.

The truth is that a car salesmen can get you almost any monthly payment you want. All they have to do is extend the length of the loan and fiddle with the interest rate a little. If you’re not careful, you could end up costing yourself a lot of money focusing on the monthly payment instead of the overall price of the car.

Low Balling the Trade-In Value of Your Current Car

This is one of the most obvious tactics used by salesmen. You come to expect it, but it continues to be employed just about everywhere. To start off, a salesmen will offer you a ridiculously low value for the current car you plan to trade-in. This is the “sucker test.” They just want to see if you’re a sucker and will take the bait.

However, as you continue negotiating, the salesman will gradually raise the amount he’ll offer for your trade-in. As this happens, you start to feel like you’re winning the negotiation. More money keeps being thrown at you, easing the sting of buying a new car.

What you might not realize, though, is that the original offer was insultingly low. Even as the price goes up, you’re hardly getting fair market value for your trade-in. You might walk away thrilled that the trade-in price started at $3,000 and eventually went up to $4,500. However, you probably could have sold it yourself for $6,500. That’s an extra $2,000 you just handed over.

Do yourself a favor and sell your trade-in yourself, privately. Then take the money and put it towards the next car that you buy. Another good piece of advice is to tell the salesman you don’t have a trade-in at all. That way he can’t use this tactic against you. Then, only after you’ve agreed on a price for a new car, you can bring up your trade-in.

Built on the tried and true “good cop, bad cop” routine is the “good salesman, bad manager” shtick. This is when the salesman presents themselves as a trusted and honest broker who is trying their best to get you a great deal. But darn it, their manager is just such a hard ass! No matter how hard the salesman tries, the manager just won’t go for the deal you have negotiated.

The salesman disappears to try and “sell” the deal to their manager several times. That leaves you sitting and waiting for extended periods each time. When they return, you’re told over and over it’s a “no go.” Then they start proposing a new deal for you, something certainly more expensive. This whole routine is a bunch of malarkey. The next time the salesman heads to the back to talk to their manager, follow them and see what they’re really doing. Chances are they’re pouring themselves a cup of coffee or checking their e-mail.

You particularly want to watch out for this tactic if you have bad credit. Yo-yo financing is a trick where the car salesman tells you that the financing has been approved (or is about to be approved). They they let you leave with the car you’ve bought, thinking everything is great. A few days later they call you up and tell you that the financing has actually fallen through. You now have to finance the purchase from another lender that, unfortunately, charges much higher interest rates.

If you offer to simply return the vehicle you just bought and get your trade-in back, there’s a new roadblock. Lo and behold, your old car has already been sold. It’s gone and unavailable. You’re stuck with the new car and have no choice but to accept the more expensive financing that’s being offered. This is straight up BS. Protect yourself by having a car loan in place, or being pre-approved for a car loan before you go to a dealership. This way, you’ll know exactly what kind of financing you qualify for. And don’t drive off with a new car unless you’re sure all the paperwork is final and official.

You’re not paying $500 a month for that new car you bought, you’re only paying $250 bi-weekly. A bi-weekly payment is one you make every two weeks, which typically adds up to $500 a month. More, actually, when you consider a year is 52 weeks and not just 48 (or 12 months with two payments each).

This is a simple example of how salesman try to deliberately mislead you. The more confused you are, the more likely you are to miss the fact that a fast one is being pulled on you. If you’re overwhelmed with numbers and confusing language, you find yourself agreeing to a deal that isn’t in your best interest. After all, “$250 car payments” sounds pretty good on its own, right?

One of the most common methods of confusing buyers is known as the “four square method.” This is when salesmen deliberately mix the price of the car, down payment, trade-in value, and monthly payment into a single transaction. It can be quite mind numbing for most people to wrap their head around. They can also do tricks like represent the interest rate charged as a fraction rather than a percentage, talk about the length of payment plan in months rather than years, and throw complicated tax figures at you. The bottom line is that the more confused you are as a customer, the better it is for the salesman.

The ultimate psychological ploy has to be when the salesman asks you, upfront, for a credit card. They take your card to the back office and don’t return with it. They often hold it throughout the entire negotiation. You start to feel like you need to make a deal in order to get it back. Maybe you wonder what, exactly, they’re even going to do with your card. You feel like a hostage. And that is exactly the point.

The salesman wants you to feel trapped. You have no choice but to negotiate with them. After all, you can’t just get up and leave without your card, right? Taking your credit card is a way for sales people to ratchet up the pressure on you. In many cases, you feel like you’ve already bought the car. The only question is how much you’ll end up paying. 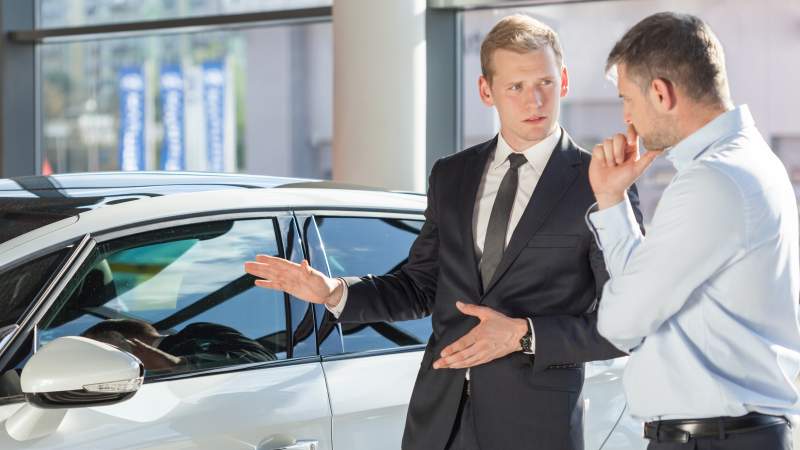