Designed for the Value Conscious: The 2017 Nissan Versa

The 2017 Nissan Versa is all about value. Looking to provide the most bang for your buck, the Versa makes it easy for anyone to afford a quality vehicle. New this year is the SV Special Edition option package. There are also some minor interior adjustments.

Prices range from $11,990 to $17,280 depending on which of the four configurations you are looking at. Despite the low prices, you will still receive a smooth ride, large trunk space, good fuel economy, and roomy rear seating. Keeping your budget in mind, you are sure to find the Versa that works for you.

For the low price offered with the 2017 Nissan Versa, it is hard to imagine the brand winning any awards, but they did! During the Vincentric “Best Fleet Value in America” awards, the Versa took home a big win. For the second year in a row, the Nissan Versa S Plus won the Best Fleet Value Subcompact making it worth taking a peek at.

All four models of the 2017 Nissan Versa come with a 1.6-liter four-cylinder engine that produces 109 horsepower and 107 pound-feet of torque. On the S model, a five-speed transmission comes standard with a four-speed automatic as an option. All other models feature the continuously variable automatic transmission (CVT) as standard equipment.

In Edmunds performance testing, the 2017 Versa sedan featuring the CVT was able to go from zero to 60 mph in 10.4 seconds. This is slightly slower than an average compact sedan, but it’s to be expected for the lower price point.

All models of the 2017 Nissan Versa are equipped with standard antilock brakes, front-seat side airbags, and traction and stability control, as well as side curtain airbags. In addition, the SL has a rearview camera as standard equipment, while it is an option on the SV.

During the government crash tests, the 2017 Versa sedan earned four out of five stars for front-crash protection. In the Insurance Institute for Highway Safety testing, the Versa sedan was able to earn a top rating of Good in the moderate-overlap front-impact tests. This was also true in the side-impact and roof strength tests. In addition, the head restraint and seat design had the second-highest rating of Acceptable when it came to whiplash protection during rear impact.

In Edmunds brake testing, the Versa SL sedan came to a complete stop from 60 mph at 128 feet. That is a little longer than the segment average.

For the price of this vehicle, you can expect that the entry-level Versa isn’t equipped with many amenities. Even the higher models aren’t overflowing with amazing features. This means, if you are hoping for any entertainment features, you are going to have to splurge a little on a more expensive trim level.

The 2017 Nissan Versa SV Special Edition is the only option that offers an audio system with a five-inch color display, Bluetooth streaming audio, satellite radio, and a hands-free text messaging feature.

Other than entertainment options, the 2017 Nissan Versa is a subcompact sedan that comes in four trim levels: S, S Plus, SV, and SL.

The entry-level S model comes with 15-inch steel wheels, air-conditioning, and cloth upholstery. It also features a tilt-only steering wheel, and manual locks and windows. In addition, you’ll have Bluetooth phone connectivity, a four-speaker sound system with CD player, a trip computer, steering-wheel audio controls, and an auxiliary audio input jack. Getting amenities such as cruise control, power windows, power door locks, and keyless entry are going to come at a price.

By upgrading to the S Plus, you’ll get the standard CVT, cruise control, and a rear spoiler.

Taking another jump up to the SV trim allows you some additional features. Remote keyless entry, upgraded cloth upholstery and interior trim, power windows and door locks, as well as a height-adjustable driver’s seat with an armrest also come with this trim. It also includes 60/40-split folding rear seatbacks, map lights, a USB port, and upgraded instrumentation.

The SL trim has all the features of the SV Special Edition. It also includes 16-inch alloy wheels, integrated turn signals on the side mirrors, a navigation system, and keyless ignition.

If you want a car in this class and money isn’t your main concern, you might be more interested in the Chevy Sonic, Toyota Yaris, or Ford Fiesta. They all start just a few thousand dollars higher than the Versa, but tend to offer sharper handling and a more stylish design.

If you want better acceleration, you should think about spending a little more for the Hyundai Accent or Kia Rio instead. But if interior room on a budget is important, then the 2017 Nissan Versa is worth a test drive.

The big selling feature of the 2017 Nissan Versa is roominess. While there are complaints about the comfortability, the amount of room offered can’t be beat within the competition.

The lower trim levels don’t offer the height-adjustable driver seat. In addition, it only comes with a tilt-adjustable steering wheel. These shortcomings can make driving slightly uncomfortable. However, the rear seats are where it’s at! There is enough head and legroom to accommodate someone that is six feet tall.

The huge trunk adds even more space to this vehicle. There is 14.9 cubic feet of cargo room. If you need additional space, the SV and SL both offer the 60/40 split folding rear seatbacks to give you more room.

The interior of the Versa leaves much to be desired. Aside from the lack of visual appeal, the controls and gauges are a little too simple, but that can be a pro or con.

In test drives, users found that the Versa offered a comfortable ride, especially when traveling on rough road surfaces. Unfortunately, this comfort designed suspension tends to be soft and negatively affects the handling.

As we noted above, the acceleration isn’t impressive, to say the least. In addition, if you press down on the gas to pass or merge, the engine gets quite loud. You will notice it more when using the continuously variable transmission.

For the price, there isn’t much you can ask for and the Versa delivers exactly what is to be expected. This basic no frills car is a winner for anyone on a budget. 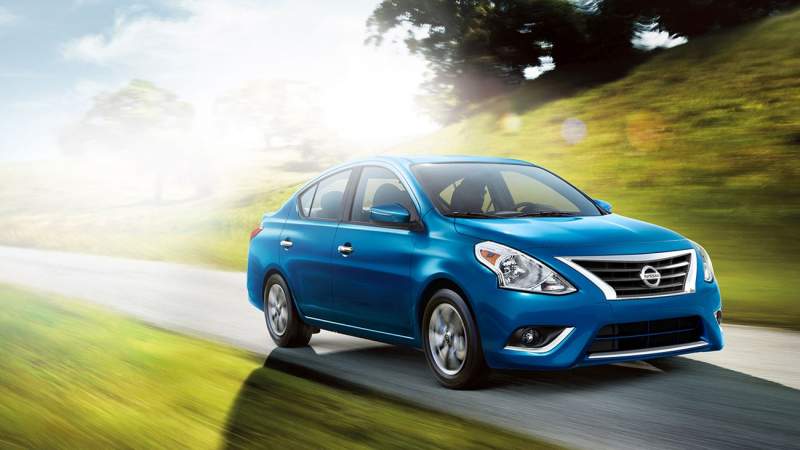