No matter where you get your Canadian driver’s license, you can rest assured that the driving laws are pretty much the same across all provinces and territories. However, since driving laws fall under provincial jurisdiction, something that is legal in one province may actually be against the law in another. They are only slight differences. But they still exist. There’s even a chance you’ve broken one of these laws without knowing it!

You probably haven’t had the chance to read all the different Provincial Motor Vehicle Acts. After all, who would want to bother with that? Instead, here are some of the most bizarre driving laws in Canada you probably didn’t know.

Curious about other bizarre driving laws? Check out our list of the craziest ones in the U.S.

Saskatchewan’s Back to the Future Law

Many of us have fond memories of Back to the Future. We remember watching Marty McFly grab hold of a passing car while riding his skateboard, hitching a ride. The Tony Hawk Pro Skater video games would later provide the correct term for this skill: “skitching”. Heck, a few of us may have even tried it when we were young and stupid.

Unsurprisingly, skitching is illegal in large urban centers like Toronto, where skaters and cyclists are in constant close proximity to moving vehicles. But a Saskatchewan highway? That’s the last place you’d expect to find someone holding onto a moving vehicle. Yet, the province quite explicitly has a law against the practice.

According to the Traffic Safety Act Section 240, “No person on a highway shall directly or by any attachment hold onto a moving vehicle other than the one in which the person is riding.” We’ll forgive the omitting of the term “skitching.” But also, does that mean it’s legal on non-highway roads?

Most Ontario drivers have likely encountered horse-drawn carriages on country roads, especially if their community has a Mennonite population. Horse-drawn sleighs are a much rarer sight, but they do exist. If you ever find yourself in one, check to see how many jingle bells it has. If it’s less than two, that sleigh driver will be breaking the law if they ever take their vehicle on the highway.

That’s right, there’s actually a law in Ontario stipulating how many bells a horse-drawn sleigh requires for highway driving. The law’s description is as follows.

“Every person travelling on a highway with a sleigh or sled drawn by a horse or other animal shall have at least two bells attached to the harness or to the sleigh or sled in such a manner as to give ample warning sound.”

No Right Turns in Montreal

This is arguably the most well-known bizarre driving law in Canada. However, there are still some misconceptions about Quebec’s red light turning rule. Up until 2003, it was illegal for motorists to turn right on a red light. However, it’s a common practice in most other parts of the world. Following a pilot study that determined turning right on a red did not result in significantly more collisions, the province changed the law to allow the practice except where prohibited by a sign.

However, the Island of Montreal still enforces the previous law. That makes it the only place in Canada where turning right on a red is prohibited. Fortunately, it’s kind of hard to miss the large number of signs reminding you of the law. They are posted on all the bridges leading to the island. The only other major North American cities where right turns on red are prohibited (unless a sign indicates otherwise) are New York City and Mexico City.

Canada’s East Coast is often associated with a more laid back way of life. So it comes as something of a shock to find that Halifax, Nova Scotia has some strict laws when it comes to cab driver attire. According to a Halifax regional municipality by-law, “every driver while in control of a taxi or accessible taxi shall wear a shirt or military type blouse with a collar and sleeves (no T-shirts), ankle-length trousers, or dress shorts which are worn within at least three inches of the knees, socks and shoes, which clothing shall be in a neat and tidy condition at all times.”

Oh but don’t worry, female taxi drivers can “wear a skirt” if they want to skip out on the ankle-length trousers!

On the surface, this by-law may seem quite bizarre. It’s important to bear in mind that it covers limousine drivers as well. Unless they’re working for an overly strict cab company, employers care more about their drivers maintaining good personal hygiene and appearance than if they’re wearing shorts.

Flashing Green Light? Watch for Pedestrians in B.C. and the Yukon!

Residents of British Columbia and the Yukon are most likely familiar with this bit of traffic trivia. However, it may be a surprise to anyone who’s never driven extensively in either location. In provinces like Ontario, a flashing green light generally means drivers have the right of way to make a left-hand turn. It’s commonly called an “advanced green.” But according to Vancouver police Const. Brian Montague, things work quite differently out west.

“I understand [a flashing green light] means something different in other places,” Montague explained to The Globe and Mail in 2015. “But here, it’s always been to show it’s a light controlled by pedestrians.”

According to Section 131 of B.C.’s Motor Vehicle Act, “drivers approaching a flashing green must drive in a manner that would allow them to stop for any pedestrians that might be in the crosswalk.” These lights will continue flashing green until a button is pushed, at which point the light will change to red so pedestrians can cross.

Here’s a driving practice that’s definitely a no-no, no matter where you are in Quebec. While turning into a gas station or mall parking lot to save time on a red light is generally frowned upon — and isn’t all that effective to begin with — it’s not technically illegal in most places.

According to Const. Clint Stibbe of the Toronto Police Service, there’s “nothing in the Highway Traffic Act” to stop a driver from doing it. “But if there’s a sign up saying ‘No Through Traffic,’ then it would be enforceable under the Trespass to Property Act,” Stibbe tells The Globe and Mail. In other words, if a business posts a sign banning cutting through their parking lot, you could face a $2,000 fine if you don’t comply.

Things work a little differently in Quebec. Under section 312 of the Highway Safety Code, “No person may drive on private property to avoid compliance with a traffic sign or signal.” If convicted, you could face a fine of $100 or more. Regardless of whether you think this is a silly law or not, it’s just bad form to try and “hack” your driving route by cutting through parking lots. Honestly, it barely saves you any time.

When passing another vehicle, drivers are required by law to signal their intention and looking to make sure they can make their move safely. It’s a pretty standard driving technique and one that quickly becomes second nature. But what if you needed to add an additional step to the process? In Prince Edward Island, there’s a law requiring drivers to honk their horn before passing another car.

Horns are useful when you need to quickly alert another driver. But honking for a lane change? That seems like a step too far. Evidently, P.E.I. residents think so too. The majority of drivers don’t do it and traffic cops rarely enforce it. However, if you’re a stickler for the rules and find yourself driving around P.E.I., one or two taps on the horn will do the trick.

It’s NOT Illegal to Drive Barefoot

Okay, this doesn’t exactly fit the description of a bizarre driving law. However, we felt it warranted an entry on this list anyway. Most Canadian drivers had it ingrained in their minds from a young age that it’s illegal to drive in bare feet, for some reason. While it’s hard to imagine why anyone would want to do this, having a law requiring drivers to have footwear does seem kind of silly. As it turns out, there is no barefoot law. It’s just a common myth. If you already knew this, go buy some shoes to celebrate, smartypants.

The Globe and Mail reached out to sources in every province and discovered that not a single one has a law dictating what you can and cannot wear on your feet while driving. That being said, it’s still a good idea to wear footwear that allows you to accurately feel the pedals, as you could be charged with careless driving if your bare feet (or six-inch heels) are a factor in a crash.

Maybe it’s not exactly bizarre that texting while going through a drive-thru is against the law. After all, distracted driving is still distracted driving — even if the vehicle is moving slowly or waiting in line. However, the weird thing about this law is that it doesn’t apply in Canada’s two most populous provinces. While you can be ticketed for texting while waiting in line for a double-double at a Tim Hortons drive-thru in most provinces, the law doesn’t apply in Ontario and Quebec.

In Ontario, the Highway Traffic Act’s policy on this doesn’t apply on private property. So it’s technically legal to text and drive while in a drive-thru or retail parking lot. The situation is similar in Quebec. That being said, the Canadian Automobile Association (CAA) recommends you text only when your car is parked. “There’s a billion things you can miss seeing when you look down for a second, no matter how slow you’re going,” says CAA spokesperson Julie Kent. So maybe just wait to send that emoji. 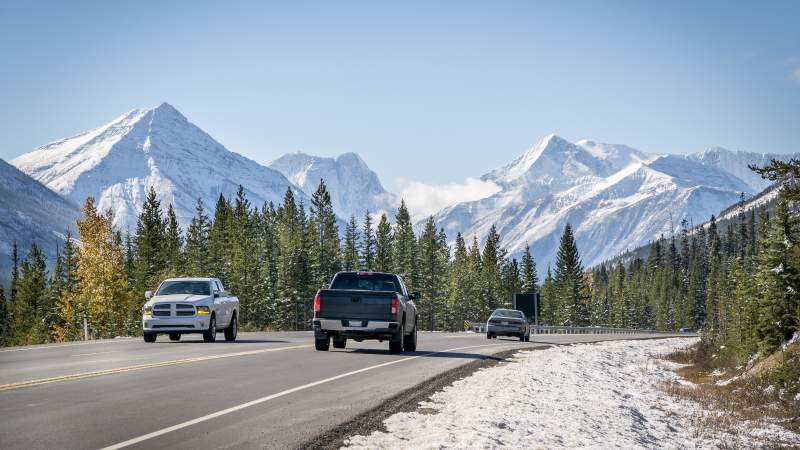