A Decade of Off-Roading: The Coolest Trucks of the 2010s

There’s just something about extra awesome owning a truck. In fact, there are songs written about trucks all the time. As we move towards a new era of the 4×4 and away from the first decade of the 2000s, let’s take a moment to consider the trucks we’ve come to appreciate most over the last ten years. Whether it’s because of the payload, the power, the looks, or whatever else it might be, there are just certain models that gave us that truck-loving feeling. So here it is, our list — in no particular order — of the nine coolest trucks of the 2010s.

Produced in 2009 and 2010, the Hummer H3T wasn’t necessarily a truck that stayed around for long. However, it is one that made quite a statement.

One of the biggest cool factors lies in the similarities the H3T shares with the Humvee. Who says you can’t feel a little stealthy riding around in a civilian vehicle? The broad shoulders, crew-cut roof, and angular lines of the Hummer H3T certainly evoke a militaristic vibe.

Before we say any more about the Jeep Gladiator, here’s a disclaimer. We realize that technically the newest Gladiator is a 2020 model. Maybe that should disqualify it from our decade recap list. However, not including this revival of Jeep’s “longest-running pickup” would be a disservice to the immense truck-ness in this SUV giant’s history.

Plus, the newest model represents the Jeep nameplate well. Unlike the Honda Ridgeline, (which didn’t make our list), the Gladiator makes no bones about its lineage. From the front you could mistake it for any other Rubicon but from the back it’s all about extending the benefits of a Jeep.

The 2020 Rubicon Gladiator starts around $34,000 but comes fitted with the 3.6-liter V6 engine Jeep is known for. With 285 horsepower and 260 lb-ft of torque, the Gladiator has the guts to keep up with the rest of the pickup pack.

Prodigies of the pickup truck gods, the Dodge Ram and Ford F-Series lineups have always been at odds. We’ve included both trucks on our list (spoiler alert!). That being said, the Ram earned its way onto the roster for a few different reasons.

Dodge has long offered the Ram 1500 model. Born in the 90s and adapting to the automotive times, the Ram 1500 fills that sweet spot for many buyers. You know that (incredibly lucrative) niche between “I want a truck instead of X” and “A truck is a tool I use to earn my living”? The Ram 1500, like many other light-duty trucks, gives you more to work with without the demands of a larger model.

Besides the versatility and affordability of the Ram 1500, there’s also the consideration of fuel economy. Oftentimes considered the downfall off the 4×4 lineup, fuel economy has now become an asset to the Dodge brand. Have you met the 2020 Ram 1500 EcoDiesel? Check this model out. Between the available horsepower, incredible torque, and vast array of trim options, there’s practically a Ram for any driver.

For most truck buyers, you’d have to really squint at the Chevrolet Colorado and GMC Canyon twins to make out the differences. Never mind the huge bowtie and GMC lettering on the respective grilles. But drive a Colorado ZR2 out into any parking lot and there are bound to be a few baseball cap bills that change direction abruptly. Because, according to Motor-Junkie.com, “it’s a perfectly designed off-road vehicle.”

The newest model of the Colorado ZR2 starts around $41,000. Powered by a 2.8-liter turbo diesel engine with max power output at 308 horses, this little half-ton is no slouch. The smaller capacity engine and diesel fuel type actually translate well when it comes to fuel efficiency ratings. Plus we’ve found it much more convenient to park than a long-bed dually, when it comes to truckin’ into town. While you might prefer the Canyon variant of the twins if you’re southern smooth, there’s plenty more horsin’ around in the Colorado.

We gave it away with the Dodge Ram, but of course we had to include the Ford F-150 in our lineup of the decade’s greatest trucks. More importantly, in addition to the lineage, we wanted to highlight the EcoBoost engine. This efficient powerhouse can be found in a number of Ford models, with similarly high fuel efficiency ratings.

While the inclusion of aluminum into many sections of the F-Series chassis certainly adds to the EcoBoost’s ability to sip fuel while still squealing the tires, the attention Ford paid to boosting fuel economy at the source is what earned this model a place on our list. Doing all that while retaining 375 horsepower and 470 lb-ft of torque is an admirable achievement, too.

Part of what made Dodge trucks so popular was the Cummins diesel engine. When paired with an Allison transmission, the powerhouse was nearly unstoppable. But when the Nissan Titan featured the Cummins name underneath its hood, truck people started to pay attention. It’s not that there hadn’t been a viable import truck platform before. It was just that the pairing brought something new to the Nissan camp.

The Titan was officially the “first true full-size half-ton pickup truck from a Japanese automaker,” according to PickupTrucks.com. Big brother to the Frontier, the Titan held its own for quite a few years. Not exactly the F-150 but hardly twin to the Dodge Ram, the Titan had a bit of a style edge over the Toyota Tundra in some ways. Nowadays, the model features a sleeker profile, not to mention an available 310 horsepower and 555 lb-ft of torque from the Cummins-powered XD versions.

The Tacoma might not be the coolest truck on the block. But like the Honda Civic, that’s what made it one of the best trucks to own. It wasn’t the most expensive, so you could modify it however you wanted without having to take out a loan for parts. Fuel economy was low on your priority list as well. How could a truck the size of a small SUV have a drinking problem anyway? On top of that, the Tacoma was a dependable truck. That’s probably the biggest reason it was pretty dang cool.

Gear-heading aside, the Tacoma has grown up quite a bit over the years. Still priced for penny-pinchers and posting a respectable fuel efficiency rating, the Tacoma is powered either by a 4-cylinder or V6 engine, both making anywhere from 159 to 278 horsepower. Even if you don’t believe in paying for a brand new car, there are plenty of older Tacomas still out on the road. Be careful though; most of them will cost you as much as a new model. Such is the way of supply and demand.

Until you stand in the presence of a Mercedes-Benz Unimog, there’s little in the way of conceptualizing just what this small-but-mighty pickup is all about. However, like many big-boy toys, you’re going to want one of your own once you’ve driven it. Nevermind the fact that practicality has low standing in such a decision.

The Unimog may not be best suited for a daily driver. However, as a truck, it goes where many others cannot. Pairing extensive utility with the styling only a Benz can provide, the Unimog knows how to get you there. It’s the confident guide you can’t help but follow.

We’ve mentioned all the great things there are to love about the Ford F-150 but there are so many more things to boast about when it comes to the Raptor. Based on the F-150 platform, the Raptor, to some, is just a trim level. For others, it’s the truck of their dreams. Wherever you fall on that scale, it’s hard to argue with an off-road-ready truck priced for a tenth of what you’d pay for a trophy truck. Or, as PickupTrucks.com says: “Ford had the guts to build a go-fast pre-runner-style factory pickup for less than $40,000.”

Which Truck Will You Pick Up?

Like any other vehicle on the market today, pickup trucks delight some buyers and disgust others. We hope you enjoyed the coolness of this article and especially the features we highlighted in these nine models. Which picks did you agree with? Which trucks would you add? Share your thoughts and comments with us below! 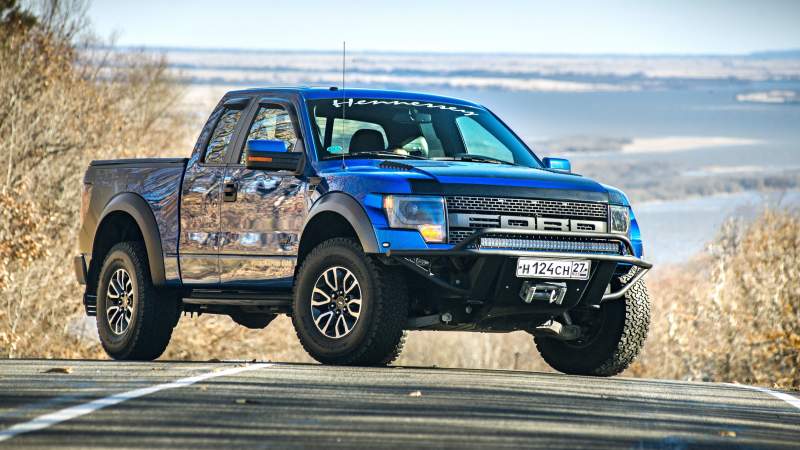