9 Cool Features You Might Not Realize Your Car Actually Has

Vehicles today come with a lot of features. And while most of us are aware of the more obvious bells and whistles in our car (especially the ones we paid extra for), there are many features within our vehicles that we are oblivious to. That’s a shame, because many of the less popular or well-known car features provide great assistance – whether in the form of convenience or safety. Here are nine features most people are unaware they might have in their car, truck or SUV, depending on the make, model, and how new it is.

You’re no doubt aware that your vehicle has some storage compartments such as the trunk, glove compartment, etc. But most vehicles today contain a lot more storage space than we realize. And that is because the storage has been placed in very stealthy areas.

This includes multiple storage compartments between front seats, large storage areas underneath seats, and even storage areas in the backs of car seats. Many cars today also contain additional storage under the carpet in the trunk where spare tires used to be placed or in the sides of doors and rear interior panels. Go exploring and you’ll likely be surprised at just how much storage space your vehicle contains.

You’ve no doubt heard of anti-lock brakes, commonly known as ABS, and have some idea that they help your car come to a safe stop. However, while anti-lock brakes were once an upgrade on most cars, they have today become largely ubiquitous and can be found in almost all types of vehicles – from airplanes and buses to cars, trucks and motorcycles.

Unbeknownst to most people, anti-lock braking systems keep drivers and their loved ones safe. Essentially, anti-lock brakes function as an anti-skid system that prevents wheels from locking up during sudden braking or on slippery conditions like ice or loose gravel, maintaining traction with the road and preventing skidding.

Did you know that some cars today can tell when the driver is fatigued and needs to take a break? It’s true. Many vehicles are now equipped with a “drowsiness detector” designed to prevent accidents resulting from drowsy driving. Mercedes, Volvo, and Nissan all have drowsiness detectors in some of their vehicles.

These systems typically uses a rear-facing camera that scans the driver and monitors eye and head movements to sense the onset of sleep. When detected, it alerts the driver. Some drowsiness detectors vibrate the steering wheel when it senses the driver is swerving, while others use an alarm sounds to wake the driver up and urge them to pull off the road and take a break.

Car accidents often result in knee injuries. When a vehicle collides with something head on, the occupants are often thrust forward and their knees slam into the seats in front of them or under the dashboard. But today, many vehicles are outfitted with what’s known as a “padded knee bolster.” This is essentially padding beneath the dashboard or on the backs of seats that is designed to cushion the blow if human knees slam into them.

Padded knee bolsters also keep drivers and passengers in the proper position to lessen their chances of being injured in a crash. Plus they keep passengers from sliding beneath the instrument panel and becoming trapped. Of course, wearing your seatbelt at all times is also a great way to prevent your knees (and the rest of you) from slammed into the objects in front of you.

When loss of steering control is detected, the electronic stability control system automatically applies the brakes to help maneuver the vehicle and bring it to a safe stop. Braking is automatically applied to wheels individually, such as the outer front wheel to counter oversteering and the inner rear wheel to counter understeering. Some systems even reduce engine power until control is regained by the driver. Again, most people are unaware that they have this safety feature in their vehicle, but it helps to save lives.

Just above your rear-view mirror, there may be another mirror that you can pop down and allow the driver and front seat passenger to see into the backseat. This is called a “conversation mirror,” and it is designed to allow the people in the front and back seats to see one another as they are talking without having to turnaround.

Many people are unaware that they have a conversation mirror, and people who find the conversation mirror (often by accident) are unsure what it is for. Now you know. Of course, in family vehicles it’s also useful for keeping an eye on mischievous children in the backseats.

A good number of vehicles today come with road condition indicators. These are little symbols or words that light up on the dashboard to tell the driver what the driving conditions outside are like at the present time. A snowflake symbol may become illuminated when driving in icy conditions, for example.

Ever had a hard time remembering where gas tank is a new (or maybe a rental) car? There is a hilarious scene in the 1983 movie Vacation, in which actor Chevy Chase gets out of his family’s station wagon for the first time and cannot find the gas tank. Such situations need not occur if you are aware that your car is fitted with a gas tank locator.

Typically, there is a tiny arrow next to the fuel gauge figure on the dashboard, pointing left or right. It’s probably something you’ve never even paid attention to before, but it indicates which side of the vehicle the gas cap is on. Of course, if you drive something unique or old school where the gas cap hides behind the rear license plate, this won’t help you much. But we’re sure you’ll figure it out.

Lane centering sensors are advanced autonomous vehicle technologies that can be found in many vehicles today. Also called “Lane Departure Warning” and “Lane Keep Assistance Systems,” these technologies essentially keep a vehicle in the center of their lane and from swerving into others.

The technology uses cameras mounted behind the windshield to read the lane lines ahead. They also use alarms and/or vibrations to alert the driver that they’re crossing over the line of the lane they are in, prompting the driver to pay attention and course correct. More advanced systems will actually take control of the wheel and automatically steer the vehicle into the center of the lane, as cars get closer and closer to becoming fully autonomous. 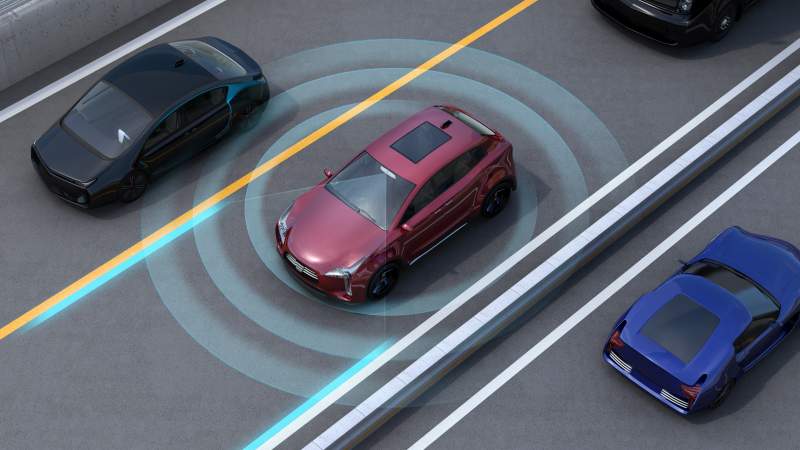