Every industry has its share of “What If” stories and “Might Have Been” legends. The automotive industry is no exception. In fact, vehicle manufacturing history is littered with tales of amazing concept cars that never went into production. Whether it was due to steep costs, impractical design, or lack of a market, many brilliant concept cars were thrown on the scrap heap of history, their plans crumpled up and discarded. Here are seven of the most incredible concept cars that never actually made it to production.

The Tucker 48 is a tragic story worthy of a Hollywood film. In fact, acclaimed director Francis Ford Coppola made the 1988 movie Tucker: The Man and His Dream about maverick car designer Preston Tucker and his doomed though revolutionary car concept, with actor Jeff Bridges playing Tucker.

The car is named “Tucker 48” for its production year (1948) and designer Preston Tucker, a former police officer who tinkered with car design in his spare time. While now regarded as “visionary,” the Tucker 48 proved to be too far ahead of its time back in 1948, especially in terms of safety features.

The concept car had a directional third headlight that would light the car’s way around corners and a perimeter frame for protecting it during crashes. The steering box was located behind the front axle to protect the driver in case of a head-on collision, and the windshield was made of shatterproof glass. Sadly, legal and financial problems scuttled the Tucker 48 before it could be mass produced and the venture never materialized. Other major car manufacturers were quick to rip off the Tucker’s then-innovative safety features, though.

The Ford Shelby GR-1 lives on in the hearts of car enthusiasts the world over. Meant to succeed the famed Ford GT, the Shelby GR-1 was designed to pay homage to the classic 1964 Shelby Daytona Coupe. The concept car that was eventually designed blew people away. It was powered by a 6.4-liter V10 engine with an output of 605 horsepower. Throw in a six-speed transmission and rear-wheel drive, and people were lining up to anoint this car the next big thing.

Critics and car buyers were salivating at the design of the Shelby GR-1. Encouraged by the hype, Ford conducted a feasibility study on the potential market for the car. Unfortunately, the bean counters at Ford got skittish and became worried that the fate that befell the previous GT would also impact the Shelby GR-1, as after two years in production the GT was still short of its sales targets. For this reason, the GR-1 was shelved and never materialized.

For a truly radical concept car, look no further than the 2006 Maserati Birdcage. Many people feel that this concept car represents the pinnacle of car design and still lament the loss of design firm Pininfarina, which developed this concept as an independent car company. An unapologetic homage to the 190 Maserati racing cars, and launched as Maserati celebrated its 75th anniversary, the Birdcage turned heads every where it went.

This car’s retro design and futuristic technology had critics in fits, as did the V12 engine that could produce 700 horsepower. Despite the many rave reviews the Maserati Birdcage received at auto shows around the world, the company insisted that it was only a prototype. In the end, the finance department at Maserati concluded that the costs of production and limited market appeal made producing the Birdcage an impractical endeavor. Too bad for all of us.

Mazda had always planned the Furai as a race car. Based on a Le Mans prototype chassis, the Furai was always meant for the track and not for the street, but this car never materialized on the race circuit either. Laurens van den Acker, who was the head designer of the Mazda Furai, has said that the demise of this race car is a “tragedy.”

Yes, it turned out to be a tragedy indeed as the concept Mazda Furai caught fire during a road test on the popular British TV show Top Gear and was destroyed. The burned concept car was one of only a few that was fully functional, and Mazda concluded it would be too costly to build more.

Some people consider the demise of the Chrysler ME Four-Twelve (or ME412) to be one of the saddest stories in automotive history. The ME 4-12 debuted in 2004 at the Detroit Auto Show and was hailed by reviewers as America’s answer to Ferrari. It was expected to usher in a new era of U.S. luxury supercars. Sadly, it just wasn’t to be.

With a V12 mid-engine and four turbochargers (get it? Mid-Engine, Four turbos, and Twelve cylinders?), the concept car had an output of 850 horsepower and 850-pound feet of torque. A seven-speed double wet clutch transmission sent power to the rear wheels and the use of a carbon fiber and an aluminum honeycomb chassis helped keep the weight to just 2,888 pounds, a weight that matched (or was better than) the Veyron, McLaren F1, and the Ferrari Enzo. The ME 412 could hit 60 mph from standstill in just 2.9 seconds. Despite its ample power and performance, the brass at Chrysler deemed the project too expensive and it was scrapped after only two concept prototypes were built — one with limited functionalities.

In the 1990s, the Jaguar XJ220 had set the record as the world’s fastest car, before being overtaken by the McLaren F1. In 2010, Jaguar decided to capture that spirit again with the C-X75, a modern take on the supercar that reviewers called “one of the most beautiful concept cars ever showcased.”

A hybrid system produced 778 horsepower and allowed this car to move at a ridiculous pace. It had a blistering acceleration and could hit 60 mph in 3.4 seconds. Jaguar initially announced a limited production run, with a maximum of 20 cars slated to go on sale. However, the planned production ended up being canceled amid the global economic crisis at the time. Given the high price of the car, the accountants at Jaguar feared nobody would be able to afford the C-X75.

Lamborghini used the concept Asterion to make a statement at the 2014 Paris Motor Show, and they certainly succeeded. Using innovative technology, Lamborghini definitively showed that, should there be a need (especially from emission regulators), it was capable of producing a hybrid gas-electric car that could still perform and look damn good doing so.

Dubbed a “super cruiser” by the press, the Lamborghini Asterion hybrid could reach 100 kilometers an hour (62.mph) in 3.0 seconds flat, thanks to a V10 petrol engine that was mated to three electric motors that had a combined output of 910 horsepower. Strangely, after making its point with the Asterion, Lamborghini shelved the concept car and instead chose to focus on its Urus SUV. While there have been recent rumors that the Asterion could be revived by Lamborghini, so far, this fabulous concept car has not resurfaced. 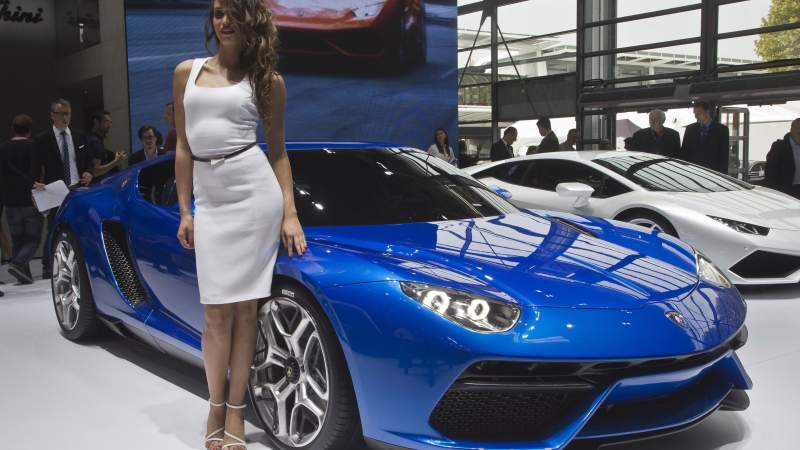