Along with the Range Rover Sport and the Audi Q7, the Volvo XC90 was part of a trio of large luxury SUVs that began to reshape the entire auto industry in the early part of the 21st century. The XC90 completely revived the way the Swedish brand was viewed in North America and paved the way for a complete shift in Volvo’s position in the market, from mass-market to a luxury brand.

Although the current XC90 is the latest version of a vehicle that’s now been in production since 2002, the 2019 Volvo XC90 is still only part of the luxury SUV’s second-generation. Even so, Volvo is a brand that’s not afraid to go its own way.

Regardless of many other attributes buyers might consider important when deciding which large luxury SUV to go for, how a model looks and the impression it creates is always a big factor. The exterior styling of the 2019 Volvo XC90 might not be as blingy as some of its illustrious rivals, but this is a model appealing to a different, more considerate, and less promiscuous buyer.

The XC90 was the first model in the automaker’s range to adopt its latest design language, and even though a number of other models have now followed in its tire tracks, the Volvo flagship still wears it best. It’s stylish, modern and cool without being too over or ostentatious, but the signature “Thor’s Hammer” LED headlights certainly make the 2019 XC90 one of the most instantly recognizable models in its class.

There are three different engine options for XC90 buyers to choose between. The first is the base T5, which is a 2.0-liter turbo-four that develops 250 horsepower and 258 lb.-ft. of torque. That’s not a small amount of power by any means, but to properly suit a vehicle weighing around 4,500 pounds the T6 is probably more appropriate for an SUV of this stature. The T6 adds a supercharger to the 2.0-liter turbo-four blueprint, and that means a significant boost to 316 hp and 295 lb.-ft. of torque.

Those are the gasoline-only options, and although they’re both pretty economical, there is an even more planet-friendly option in the shape of the range-topping T8. The T8 adds a plug-in hybrid system to the T6, and that means the XC90 power ante is then upped to 400 hp and a massive 472 lb.-ft. of torque. Not only does this powerplant allow the Volvo to run on electric only thanks to a 10.4 kWh battery onboard, but it also makes this a quicker option than the non-hybrid alternatives.

Let’s get one thing straight here: there’s no such thing as a basic or Spartan XC90. After all, this is a luxury vehicle, first and foremost. There are four different trim levels to choose from, although top Excellence trim is only available with the T8 plug-in hybrid powertrain.

R-Design models then go down a sportier route with features like roof spoiler, dual integrated tailpipes and cross brushed aluminum interior trim. The Inscription trim level is only available with T6 and T8 powertrains, but it does add such upscale features as a 360-degree Surround View Camera, a Premium Harmon Kardon sound system, a 12.3-inch Digital Driver Display and plenty more besides.

T8 Excellence models take luxury to entirely new levels. If a crystal gearshift, climate controlled second-row seating, power recline seats and footrests, and even crystal glasses for rear seat passengers don’t give the right impression of a top-of-the-line luxury SUV, it’s hard to think of what would do.

Most XC90 interiors feature stitched leather, real natural-finish wood trim and metal accents that complement the Volvo’s minimalist Scandinavian styling, and which tell you this is a luxury model as soon as you peek inside. There are some more luxurious and higher quality interiors out there, but they’re in models that often cost more and are from manufacturers that can point to a longer history and far more experience in the luxury sector.

“The 2019 Volvo XC90 is a standout effort from the Swedish brand, offering style, luxury, and practicality in a way many other luxury SUVs don’t.” – The Car Connection

The interior seating isn’t quite as flexible as families will enjoy in a minivan, but the XC90 comes as close as possible without compromising on style. Second and third-row seats are elevated to deliver the classic SUV “stadium seating” format, and the second row can slide backward and forwards to assist entry to the third row or to give extra legroom for those in the second-row seats.

With seating for up to seven people, 103.8 cu.-ft. of passenger volume, as much cargo space as a midsize sedan behind the third-row seats and plenty more when the seats are folded away when not in use, the Volvo XC90 is as practical as it is stylish.

This might be a pretty large and quite a heavy vehicle, but you wouldn’t know it when you’re behind the wheel. Although the electric-assisted steering can feel a little light at times for some tastes, it still feels extremely natural and intuitive and the overall handling of the XC90 is seriously impressive. It’s no sports car, but the big Volvo has limited body roll for a tall SUV and the ride for passengers in all seats is every bit as smooth and comfortable as it should be a spacious luxury vehicle of this quality.

Just because Volvo has moved upscale in recent times, it doesn’t mean it’s forgotten its roots and reputation as a maker of some of the safest vehicles in the entire world. The NHTSA has given the 2019 Volvo XC90 a full five-star rating for overall safety, and the IIHS has given it the coveted Top Safety Pick designation.

Every model comes standard with an extensive suite of best in class safety features, many of which can be cost-options with rivals. The suite includes automatic emergency braking, a rearview camera, blind-spot monitoring, parking sensors, adaptive cruise control, active lane control and rear collision mitigation. All XC90s also come with road sign recognition, and some optional safety tech even gets close to full autonomy.

It’s up to the individual just how prestigious the Volvo name is to them right now, especially when the XC90 is being shopped against some of those well-known German rivals. If the 2019 Volvo XC90 was as expensive or more expensive than some of its biggest rivals it might be hard to make a case for the Swede. However, the XC90 represents very good value in its class and is very affordable at the entry level, with a starting MSRP of just $47,700. It also looks good, it drives well, it’s economical to run, the interior is spacious and comfortable, and as you’d expect from a Volvo, it’s about as safe as a large SUV gets. 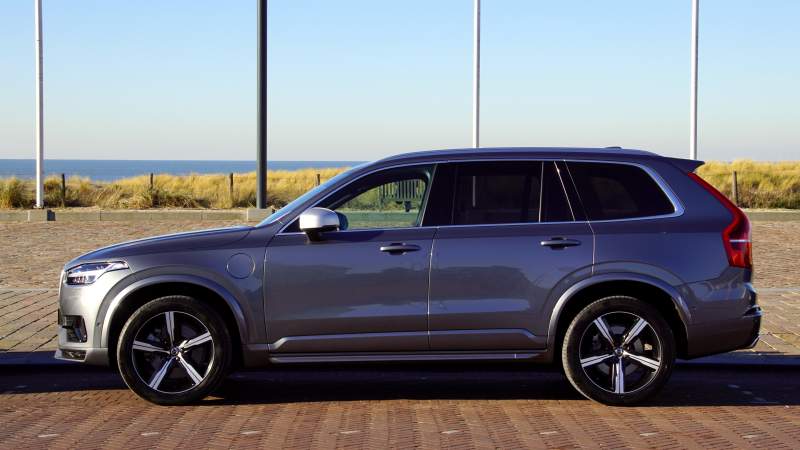