Even if you don’t foresee yourself ever being able to afford one, it’s still easy to get excited about exotic foreign sports cars. And within the current Mercedes-Benz family, the standout model for many is the 2019 Mercedes-Benz AMG GT.

Along with uber-luxurious sedans, the AMG GT is what Mercedes does best. If you have the budget, here’s why you should check out the 2019 AMG GT.

Despite the ever-growing popularity of SUVs and trucks these days, four-door GT models seem increasingly popular. That means there are a number to choose from at the moment. But none look as good as the 2019 Mercedes-Benz AMG-GT four-door coupe. With four doors and a hatch at the back, this is as practical as supercars get.

If you don’t need that additional practicality, the AMG-GT coupe and roadster are even more devastatingly attractive. To be fair, the exterior styling isn’t immediately as beautiful as some, but it’s a sinister, brooding design that grows on you over time.

Although you can buy some domestic muscle with even more horsepower under the hood for a lot less money than the Mercedes, there’s a level of sophistication on display here that’s pretty much unrivaled in the modern auto industry.

Perhaps surprisingly, the two-door GT Coupe and Roadster doesn’t offer a model as powerful or as fast as the GT 63 S. The entry versions are more powerful than the four-door’s entry model though, with a base 4.0-liter bi-turbo V-8 producing 469 hp and 465 lb.-ft. of torque. And while the two-door Coupe and Roadster feature a seven-speed dual clutch automatic transmission, the four-door GT uses a more sophisticated nine-speed Speedshift automatic.

Think of everything you expect from a high-spec Mercedes-Benz interior and double it. That’s close to the interiors in the AMG GT. Comfortable, connected, sporty, and incredibly high-quality, the cabin of the AMG GT is also quite spacious. Yet the design of the interior can also make the cabin feel snug due to the car’s high beltline.

Performance seats in the 63 models can be a little tight for some adults, but they do hold you in very nicely, and that’s probably the most important thing for a car of such blistering performance.

Of course, the AMG GT is about far more than straight-line speed. The Mercedes drives and handles like a much smaller’ lighter car than it actually is, and it handles the tight twists and turns of a challenging track like a true racing thoroughbred. The weight can be felt in corners when severely pushed as it will push the back end out. However, the composure is quickly restored with a touch of the excellent brakes, especially if they’re the available carbon-ceramic variety.

There are no crash test safety ratings available to judge the AMG GT by, but it’s hard to imagine this is anything other than one of the safest cars on the road. With every passive and active safety feature you can imagine standard and available, the AMG GT also includes all the Intelligent Drive features found in the AMG S-Class.

The 2019 Mercedes-Benz AMG GT perhaps isn’t quite as exotic as a Ferrari 458 or a Lamborghini Huracan, but it doesn’t cost anywhere near as much. And the Mercedes is infinitely easier to live with. Its performance is close to Italian supercars, but the Mercedes is a perfectly practical car to have as a daily driver. 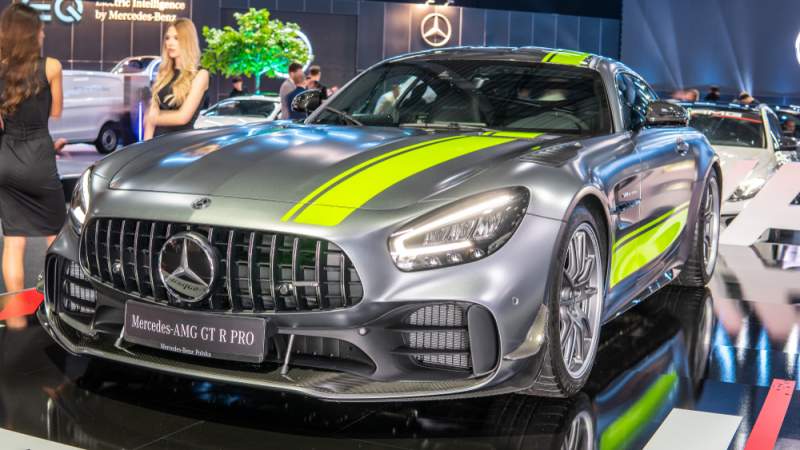