Lexus has been doing hybrid SUVs for some time now. And the 2019 Lexus RX, though it isn’t a hybrid-only model, is the luxury SUV most buyers aspire to own.

We’re going to take you through some of the areas where this midsize luxury crossover excels. Here’s what you need to know about the 2019 Lexus RX.

Let’s start with the most contentious feature of the 2019 Lexus RX: its exterior. The RX used to have round edges and egg-shaped lights, but the latest model is the complete opposite. There are sharp angles everywhere you look, intricate details, and squinty lights.

There’s no disputing the fact it’s a bold, brash, modern and instantly recognizable design, but it could be as easy to love or dislike. The thing is, though, that many drivers are choosing the newest RX.

Looking at the RX, it would be easy to think the aggressive, sporty styling means this is a performance SUV, but it really isn’t. That’s not to say the Lexus is sluggish by any means. It certainly isn’t slow. The 2019 Lexus RX is more about competent, understated performance with just enough to keep life interesting.

There are two powertrain flavors in the RX lineup, and both are powered by an impressive gasoline V-6. The standard propulsion system is a straightforward 3.5-liter V-6 producing 295 horsepower and 267 lb.-ft. of torque, which is sent to the front or all four wheels through an excellent eight-speed automatic transmission. Front-drive models get you from 0 to 60 mph in as little as 7.7 seconds, while all-wheel drive increases that to 7.9 seconds.

The alternative powertrain is a hybrid that’s based on largely the same gas engine as the standard RX. The 3.5-liter V-6, in this case, is coupled to some batteries and a couple of electric motors at the rear wheels, which means the hybrid is all-wheel drive as well as a little more powerful and much better on gas than the standard ES. The system’s total output is 308 horsepower, but the additional weight of the motors and batteries means the performance is identical to the standard all-wheel-drive ES.

The biggest difference between the standard and hybrid versions of the Lexus SUV is fuel economy. The best EPA ratings for the non-hybrid, front-drive ES are 22 mpg in the city, 27 mpg on the highway, and 23 mpg combined. Go for the hybrid instead, and those numbers leap to a very impressive 31/28/30 mpg. This might not be a big deal when it comes to highway driving, but if much of your time is spent in the city, 31 mpg for a vehicle of this size and performance is a tempting proposition.

Quality materials, loads of legroom, good bolstering, plenty of adjustment, heating and ventilation. Just about everything you could ask for in a vehicle seat is available here in the 2019 Lexus RX, and it’s difficult to think of better.

Even entry-level models come with a synthetic leather upholstery, and it’s so convincing, it really can be hard to tell it from real leather. The majority of models do get real leather, and there’s a bit more character on offer than you might imagine as it can even come in a garish lipstick red in F Sport models if that’s your thing.

There’s almost as much legroom for second-row passengers as some rivals provide for those sitting up front, and although F Sport models pump some enhanced engine noise into the cabin, the majority of RX models are whisper-quiet inside.

Lexus is almost a byword for copious standard features, and the 2019 Lexus RX lives up to that billing. Entry models come standard with a full set of power features, synthetic leather, 18-inch alloy wheels, LED headlights, power front seats, and an 8.0-inch touchscreen for infotainment.

Higher trim levels really do go all-out in the features department with an available 12.3-inch touchscreen display, and the Panoramic View Monitor with four high-resolution cameras mounted around the vehicle to give drivers a bird’s eye view of the near environment.

There’s so much to love about the 2019 Lexus RX that it’s hard to know where to start.

In the world of performance cars, there’s a distinct cultural difference about how American manufacturers and Japanese automaker approach things. Many of us prefer the traditional American way of doing things with a V-8 muscle car that relies on sheer power and displacement. However, when it comes to luxury SUVs, the Japanese philosophy is definitely the way to go.

When you take the time to properly investigate the Lexus RX, it’s hard to make an argument against it. 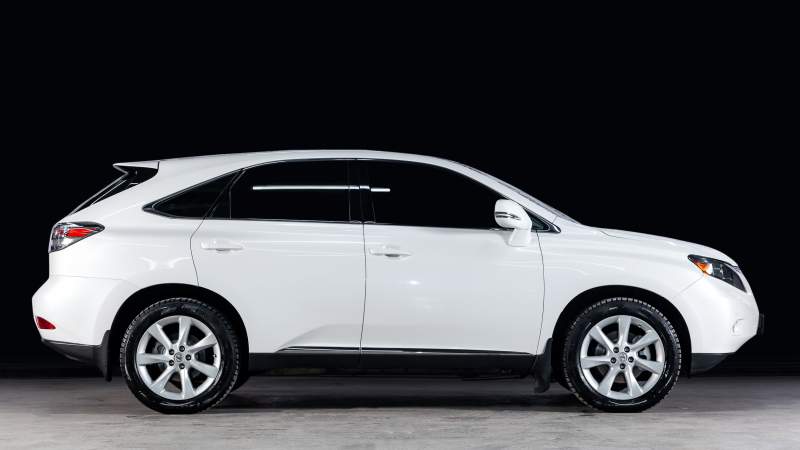