If there’s a prime example of how a vehicle that’s been around for decades can successfully progress with the times and remain as current, it’s the 2019 Jeep Grand Cherokee.

This beloved Jeep model goes head-to-head with its rivals on merit alone. One of its biggest strengths is there’s a Grand Cherokee to suit just about everyone – and here’s what it has to offer right now.

Jeep has done a terrific job with the exterior styling of the 2019 Jeep Grand Cherokee. If you study it closely, it’s possible to see a hint of the original model’s styling in today’s GC. At the same time, it’s about as far removed from the early 1990s model as possible to be without abandoning its roots altogether.

It’s a bit more angular and conservative than some of its more recent incarnations. All in all, though, the 2019 model isn’t as aggressive-looking as those of the past. The result is a midsize SUV with extremely wide appeal.

The highest trim levels come with acres of chrome. Entry models look smart, clean, and premium. And Trailhawk variants have all the right rough-and-ready styling cues to emphasize their undeniable off-road credentials. The 2019 GC can be as prestigious, subtle, serious, or outrageous as you want it to be. And that’s just the exterior styling.

So, what engine would you like under the hood of your new midsize SUV? No matter what you want, you’ll probably find what you’re looking for in the 2019 Grand Cherokee lineup.

The starting point is a 3.6-liter V-6 that develops 295 horsepower and 260 lb.-ft. of torque. This unit is standard with every version of the Jeep other than the SRT and Trackhawk, and it’s a very capable performer both on and off-road.

Last year saw the return of a turbodiesel to the GC lineup after a brief hiatus due to emissions, and the 3.0-liter unit puts out 240 hp and a very useful 420 lb.-ft. of torque. This engine option increases the towing capacity to 7,400 pounds, and it’s also better for fuel economy than any of the gas engine options.

In the sensible world of midsize crossover SUVs, the Grand Cherokee SRT’s 6.4-liter V-8 that produces 475 hp and 470 lb.-ft. of torque would be the flagship powerplant option, but not here. That’s because we now have the fabulously ridiculous Grand Cherokee Trackhawk with a 6.2-liter supercharged V-8 that puts an incredible 707 hp and 645 lb.-ft. of torque at the Jeep’s disposal. If you want a midsize crossover straight from the factory that will get from 0 to 60 mph in 3.5 seconds and cover the quarter-mile in 11.6 seconds, this is the only way to do it.

We’ve established the 2019 Jeep Grand Cherokee can do things few rivals can even dream about. But that doesn’t mean the interior will be a bit of a letdown. The Jeep is also as comfortable as anything in its class, and a lot more comfortable than most.

Because it’s only a five-seater, the Grand Cherokee has plenty of room for all its occupants and cargo too. The front and rear seats are excellent, and the fit and finish are absolutely superb in every trim. There’s 36.3 cu.-ft. of cargo space behind the second-row seats, which is twice the trunk space of most midsize sedans.

Even the entry-level Grand Cherokee Laredo comes standard with 17-inch alloy wheels, a leather-wrapped steering wheel, two USB charging ports, a 7.0-inch touchscreen infotainment system that’s Apple CarPlay and Android Auto compatible, Bluetooth connectivity, a rearview camera, parking sensors, and blind-spot monitors with rear cross-traffic alert. Beyond that, you can have just about every imaginable feature and luxury you can imagine – as long as you’re prepared to pay for it, of course.

There are currently 11 trim levels of Grand Cherokee to choose from, which are the Laredo, Upland, Altitude, Limited, Limited X, Trailhawk, Overland, High Altitude, Summit, SRT, and the Trackhawk. The Laredo, Limited, Limited X and Summit are effectively the on-road focused models, the Trailhawk, Overland and High Altitude are the off-road-focused variants, and the SRT and Trackhawk are mind-boggling high-performance models.

It’s hard to say anything negative about the 2019 Jeep Grand Cherokee. There really is one for everyone, except those who need more than five seats. The only issue with the fabulous Jeep is actually a broader problem: you get what you pay for, and getting a lot costs a lot.

Between an entry-level Grand Cherokee and a fully-loaded top-of-the-line model, there’s a price spread of around $70,000. That means you can pay a six-figure sum for a 2019 Grand Cherokee, but you also don’t have to. The GC has a starting MSRP of just $31,945 for a 4×2 Laredo. And that looks like extremely good value for money for such a capable, powerful, comfortable, and well-equipped midsize SUV. 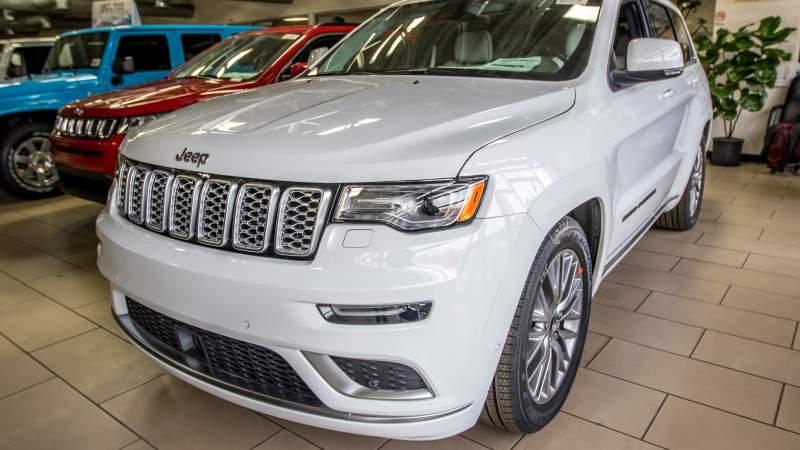