It’s cute, it’s fun, and it comes with brand cache. What’s not to love about the 2018 Jeep Renegade?

Jeep has carved a fearsome reputation off the back of the Wrangler and the Grand Cherokee. Clearly the Renegade is aimed at urban freewheelers, although you can spec it up into an off-roader worthy of the iconic seven slat grille.

This is a small SUV that brings the rough and tough style to the urban jungle. It’s curvaceous and there’s a unique look to the Renegade that can’t help but put a smile on your face.

Jeep has revised the car for 2018 with a series of small changes. They do make a difference, but is it enough for the plucky little Jeep to climb to the top of the small SUV mountain?

The base level Jeep Renegade Sport starts at $17,995. That is a tempting proposition for a designer label car that will appeal to the youth market.

That low base gives you a 1.4-liter, 160 bhp inline four-cylinder engine mated to a six-speed manual gearbox that drives the front wheels only. It will get you to 60 mph in 8.9 seconds and tops out at 116 mph. It’s more than enough for the city and most of us will never need more. Inevitably, though, you’ll run into its limits pretty quickly if you head off the tarmac.

If you’re going to tackle the rough stuff, you will probably want the 180 bhp, 2.4-liter Tigershark Multi-Air powerplant and nine-speed automatic. Inevitably, that comes at a premium price. You can either hit the options list for the bigger engine and four-wheel-drive on the Sport model or step up to the mid-range Renegade Limited and hand over $25,195.

Now that leaves the two big-hitters in the line-up, the Trailhawk and Deserthawk. Both of them are serious off-roaders since they come with a low-ratio box for off-roading and are “Trail Rated” with the best 4×4 capability in the small SUV class, according to Jeep anyway. Inevitably they are more expensive as the Deserthawk will set you back $28,390.

The Renegade is surprisingly efficient, if you opt for the front-wheel-drive and smaller-engine variant. The 1.4-liter, four-cylinder turbo will give you a respectable 24 mpg in the city and 31 mpg on the highway.

If you want the additional power of the 2.4-liter engine, then get ready to pay a little more at the pumps as well as the dealer. 22 mpg in the city and 30 mpg on the highway is still respectable, though, and you only have to shave 1 mpg off that if you opt for four-wheel-drive. 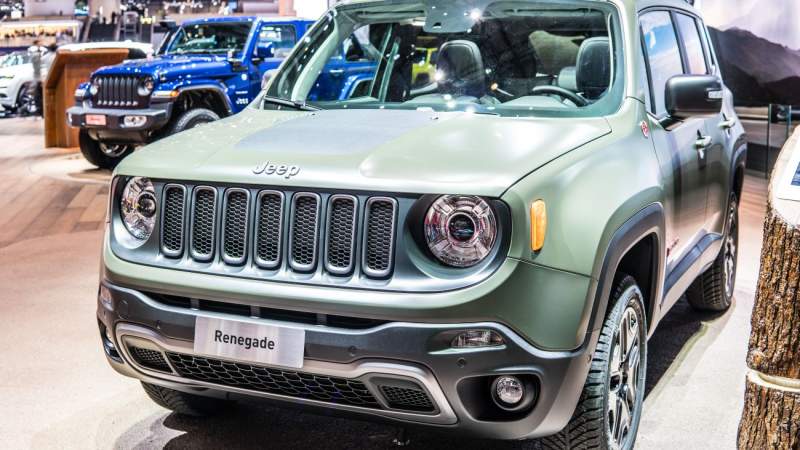 Active safety is conspicuous by its absence, too. The optional safety package offers a blind spot monitor and cross traffic alert, but this certainly feels a step behind some of the more intelligent competition.

The base model gets a five-inch touchscreen that comes with voice activation and Bluetooth connectivity. The 6.5-inch unit — an optional extra on the Sport and standard equipment on the Latitude and up — is a much more serious piece of kit that is ready for Apple CarPlay and Android Auto.

But you can go all-out and get the 8.4-inch Jeep UConnect system with advanced navigation on every model except the Sport. A reversing camera is now fitted as standard on every model, too, which is a new for 2018. Every model comes with a 3.5-inch TFT screen in the instrument cluster, too, which allows you to cycle through huge amounts of information.

The small SUV market is a cash cow for the big manufacturers and the Jeep Renegade has some serious opposition. The Nissan Rogue, Honda HR-V, Mazda CX-3, Subaru Crosstrek, Chevrolet Trax, and Mini Countryman are all waiting to take chunks out of the American legend.

The Rogue is more expensive and isn’t even a match when it comes to off-roading. But if you just want the off-road look and you’re not going to hit the trails, then it’s arguably a better car.

It’s a similar story with the HR-V, which is down on power and yet arguably a more capable road car. It simply isn’t set-up for the off-road capability in any spec, so the engineers could focus on road-holding. We could give you more or less the same story for the Crosstrek, despite its substantial ground clearance, and the CX-3.

The Chevy Trax is a real threat to the Renegade, and the Crosstrek has its measure when it comes to active safety and equipment. But the Renegade may well turn out to be an emotional, feel good purchase with younger buyers wanting to get in with the American icon on the ground floor.

Now the Countryman is something of a false equivalence. You can just about include it, but if you want four-wheel-drive then you have to opt for the S and that is a whole new price bracket.

If you want to go off-road, then the higher specification Renegade rules the roost here and it comes with so much character that you can overlook the fact that it isn’t the sharpest at the apex on the road.