When it comes to innovations, motorcycles are a bit more limited than cars. The big problem, of course, is space. Most motorcycles allow for only one (or two) occupants. The second issue is that the riders are outside while driving – which means they have to deal with wind, rain, and other elements. You can’t really play a DVD movie for the kids while operating a motorcycle. Plus, operating a motorcycle arguably requires much more concentration than driving a car.

Nevertheless, motorcycle manufacturers have continued to try and develop new innovations for their machines over the years. It’s not always very successful. While some innovations have proven to be great, others have left bike owners scratching their heads. Here is a list of 10 particularly useless motorcycle innovations.

While a great addition to a car, an iPod docking station on a motorcycle doesn’t make a lot of sense for a number of reasons. First, it’s difficult to hear music on a motorcycle because of the wind blowing by — no matter how good the helmet is. Second, you would have to keep a playlist on “shuffle” the entire time, because scrolling through songs while driving a motorcycle would be extremely difficult and definitely dangerous.

Lastly, the iPod itself would have to be very securely placed on the motorcycle so as not to come flying off. It could easily break when hitting the ground or cause an accident by hitting a passing vehicle. Despite these obvious practical considerations, many motorcycle manufacturers such as Triumph and Harley Davidson sell bikes with optional iPod and iPhone docking stations. Many of these motorcycles still employ the old 30-pin iPod connector instead of the newer lightning dock that Apple has switched to. Stick with Bluetooth. Even better, just don’t bother with music on your bike. Enjoy the rumble of the engine instead.

Why? That’s the question motorcycle enthusiasts ask themselves when they see exhaust pipes mounted directly beneath the seat of a bike. Not only does the rider get his butt overheated, but they also get a much stronger whiff of the exhaust fumes coming from the motorcycle. Plus there is typically more vibration rattling the driver (and passenger) as they make their trip. It just doesn’t make sense, particularly when traditional side mounted or belly mounted exhaust systems work perfectly well.

This innovation seems to be for cosmetic purposes only. All it seem to accomplish is a different look and feel for a bike. They really serve no practical purpose, like an increase in efficiency or performance. Placing the exhaust pipes under the seat also limits the storage space on a motorcycle. A bad idea anyway you look at it.

A G-Force meter, as seen on motorcycles like the Yamaha R1, measure the G-forces being generated by a motorcycle at a particular time. It fluctuates as people take corners, accelerate, slow down, or change lanes on the highway. Why is this necessary? It’s not actually necessary at all. In fact, knowing the G-forces being exerted on the motorcycle and its driver does not impact the operation of the vehicle in the slightest or have any bearing on the operator of the bike.

A G-force meter serves only to distract the driver who will no doubt be tempted to constantly look down and watch it move up and down when he or she should be paying attention to the road. A G-force meter basically looks like something you would see on a motorcycle racing video game. It’s not needed on a real bike.

Hand guards are typically placed on dirt bikes and off-road motorcycles. They are used to protect the driver’s hands from being hit by rocks, dirt, tree branches and other off road hazards. Hand guards are usually made of plastic that can be quickly and easily replaced if broken by a branch or rock.

However, some motorcycle companies have taken to stuffing hand guards with sophisticated electronic indicators – things such as turn signals and temperature gauges. This is completely unnecessary and it just means that when the hand guards inevitably get cracked or broken, they will be both expensive and difficult to replace. This is a really a case where less is more. Keep these guards simple and just let them serve their original purpose. There’s no need to over complicate hand guards with this type of innovation.

Just because people like a feature on a car doesn’t mean you have to offer it on a motorcycle. Such is the case with keyless ignition or remote vehicle starters. They can be fantastic for a car, but aren’t needed on a bike. First of all, it’s not like a motorcycle needs to heat up in winter. Owners don’t need to start the motorcycle from across a grocery store parking lot and allow the engine to warm up before they get there. Most motorcycles are not even driven in winter.

Then there is the issue of lost keys. The truth is that the safest place for a motorcycle key is in the ignition switch. That’s the place where it is least likely to get lost, stolen, or forgotten. Using a key to start a motorcycle remains the safest and best way to get a bike going. Starting the bike with a push of a button on a key fob as you walk towards the motorcycle is just silly.

Everyone has a favourite color. We get it. But does the instrument panel on your motorcycle really have to be in your favourite color? Won’t the usual white or yellow LED light display work just fine? After all, this is a motorcycle we’re talking about, and not a Crayola box, right?

Hear us out on this one. We understand that many people love and cherish motorcycle sidecars. We know all the arguments why a sidecar is better for passengers than sitting on the back of a bike. It’s more comfortable, easier on the driver, blah, blah, blah. However, statistics show that more accidents are caused with motorcycle sidecars (and more people are killed in them) then almost any other type of vehicle.

In fact, contrary to popular belief, motorcycle sidecars make it more difficult to control a bike. They really have a negative impact on balance and maneuverability. Motorcycles with sidecars are more prone to tip over, and they can be extremely dangerous when changing lanes or maneuvering around corners. Really, what’s the point? They seem more like a cute gimmick than a useful feature. Studies show that people are safer on the back of a motorcycle holding onto the driver than they are in a sidecar.

This is another case of an innovation that works well in cars failing to transfer over to motorcycles. While turn signals that automatically shut off are just fine for standard vehicles, they have always been problematic on bikes. For whatever reasons, motorcycles have a more difficult time telling exactly when a turn has been completed.

Despite efforts over the years to get turn signals to shut off automatically, most bike companies still equip their vehicles with buttons that have to be manually pushed to switch off a turn signal. This may seem old-school to many riders, but it’s the best way to ensure that the annoying turn signal is actually cancelled after a turn is finished. Otherwise, the turn signal continues to flash. It’s not like the driver can hear the irritating “clicking” noise over the wind and traffic on the motorcycle, either.

Global positioning systems, or GPS, may be the way of the world today. However, they don’t work well in every situation. Case in point: motorcycles. Built-in GPS screens on motorcycles are distracting and clumsy to operate on bikes. Drivers should be keeping their attention on the road, not tapping in directions.

Taking one hand off the bike to punch in an address or adjust coordinates on a GPS can be downright dangerous. Besides, it’s easy enough to just use the GPS that is standard on most smartphones today. Have a look at the map during rest stops, and go from there. Is it really the end of the world if you do end up missing a turn? We don’t think so. After all, when you’re cruising unknown roads on a bike, it’s more about the journey than the destination. You’ll get there when you get there.

It’s become kind of trendy, but we’re in the camp that thinks a motorcycle with three wheels is not a real motorcycle at all. Whether it is the Can-Am Spyder, Polaris Slingshot, or Honda Neowing, the trend towards bikes with three wheels instead of two is not appealing. Many people claim they like a third wheel for stability. Others say they find a three-wheeled bike more comfortable for touring. The fact is that a third wheel on a bike is not needed.

A motorcycle is supposed to be two wheels. Creating some weird hybrid Frankenbike is not going to change that fact. Like most of the useless innovations on this list, drivers should stick to the basics and avoid the unnecessary changes to motorcycles. If you want three wheels, just buy a car already and go up to four wheels. Or why don’t we bring back the unicycle while we’re at it. Sheesh! 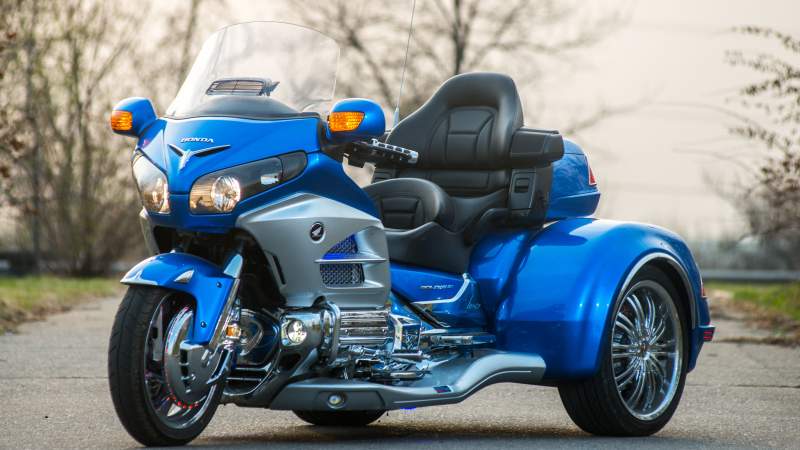