Buying a used car is a smart financial decision. In short, you get a car for less money than buying new. What you trade savings for, however, is the protection a new car offers. New cars come with protection because… well, they’re new. No one’s messed with them, their parts haven’t worn out yet and nothing’s happened to them. Used cars, on the other hand, have histories. And while most used cars are fine, there are a number of issues used cars can have that make buying them a waste of your hard-earned cash, instead of a smart financial choice. Luckily, there are some pretty clear signs of when you should walk away from a used car.

Almost anything on a car can be fixed or replaced. The question is, should it be? When it comes to excessive rust, the answer is often no. While rusted out body panels can be replaced, it’s expensive and time consuming. Rust on the frame means that the frame —the very bedrock of the car — is rotting away.

Replacing a car’s frame, even if you just replace part of it, is expensive. It also runs the risk of weakening the car overall. While some rust is to be expected on a used car, look out for excessive rust with bits of metal flaking off and avoid cars with rust in key areas. Let’s put it this way: some rust on the floor pan is OK, but if Fred Flintstone could drive the car, you’re better off walking away. 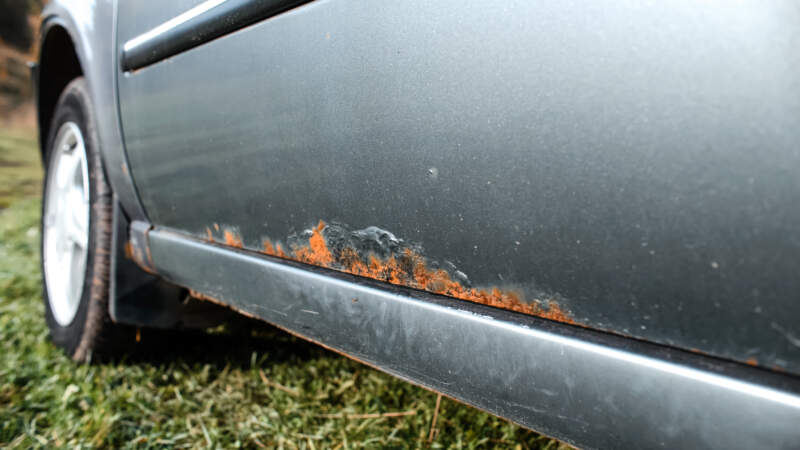 Buying a stinky car seems like a bad idea from an olfactory perspective, but a trunk with a set-in funk can also be a sign of larger issues. Avoid used cars with musty, moldy or mildew-y interiors as this is a sign of possible flood damage.

When a car suffers flood damage, most insurance companies consider it a total loss because the water damages almost every system, from mechanical to electrical to even — you smelled it — the carpet. Trying to fix a flood-damaged car will quickly eat up any money you saved when you bought it. 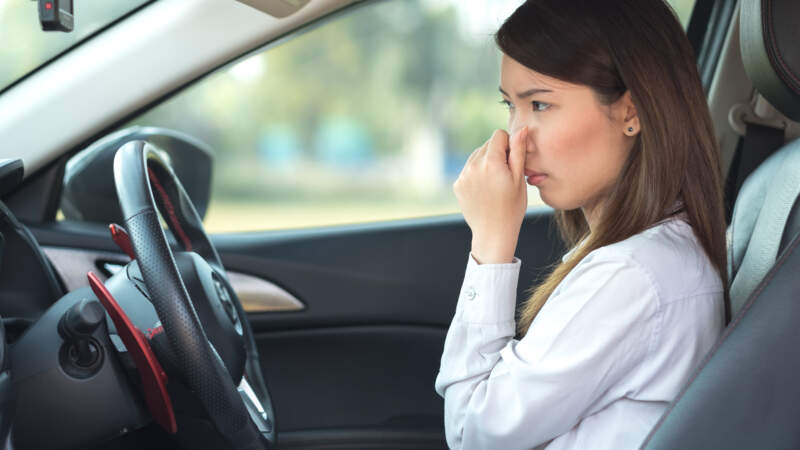 Many used car dealerships offer their own financing. While the option can be handy, it’s almost always cheaper to obtain your own financing via a bank or other private lender. You can often get pre-approved up to a certain amount. All of that means you won’t have to play the back and forth games with some shady finance manager at a used car dealer.

Beware of any financing offer that extends beyond six years. You should also have some sense of what the average interest rates are in your area. You might get talked into paying 7.99% on an eight-year term, when a little comparison shopping could have seen you get the same loan from someone else at 3.99% for six years.

Finally, watch out for ridiculous extra fees or products. You’ll often be up-sold on things like glass etching, rust-proofing, fabric guarding, paint sealant, or an extended warranty. While some of those upgrades have a bit of merit, you shouldn’t be rolling them into a multi-year loan deal. It’s cheaper to just get them done after you buy the car, and pay up front. 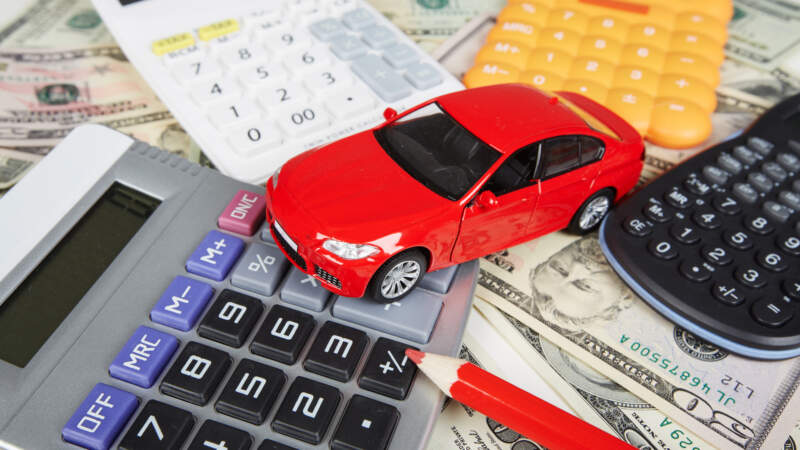 A freshly-painted accent wall in your living room is a good idea. On a car, however, you want all the paint colors to match, and fresh paint isn’t always a selling point. Like new or mismatched carpet, new or mismatched paint is an indicator that repairs have been made, which could mean that the car was in an accident. 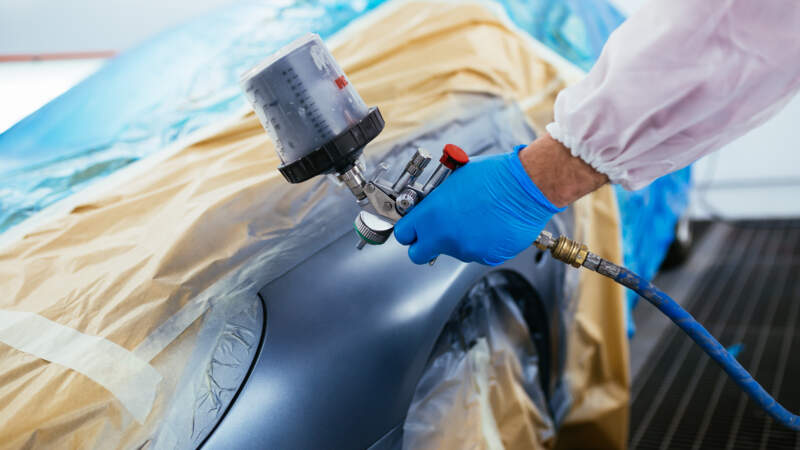 We’ve all driven around for a week or two with the check engine light on in our car. After all, if the car is running it’s easy to overlook a light on the dashboard. And, sometimes those lights do come on because of a bad sensor or because we didn’t tighten the gas cap enough.

Still, if you’re looking to buy a used car that has a dashboard that looks like a Christmas tree, that’s enough of a red flag that you should reconsider. Sure, the lights could be on for a minor reason (again, that tricky gas cap), but they also could be on because of a bigger problem. If you really love the car, a trusty inspection from an independent mechanic can tell you if those lights are something to be concerned about. 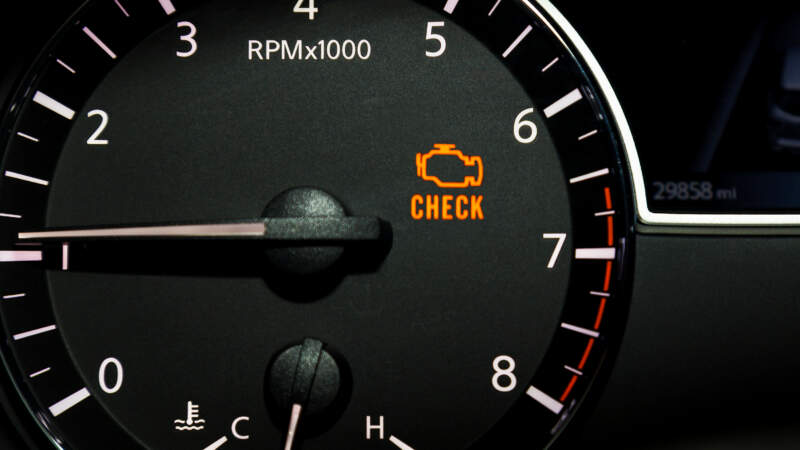 Another tell of a possibly flood-damaged car is when the carpet doesn’t match the drapes. Unscrupulous sellers will sometimes replace a car’s carpet to get rid of the stinky tipoff that the car was flooded. While new carpet could be a plus in a used car, it’s not something most owners typically replace, so if you see it, be sure to grill the seller about it.

There are other ways to check for flood damage, like a water line in the engine bay. A car that has been totaled due to flood damage should also have this fact noted on its title. Even if you can’t tell for sure that a car has been in a flood, if you suspect that it has, it’s best to just float on by and find a better one. 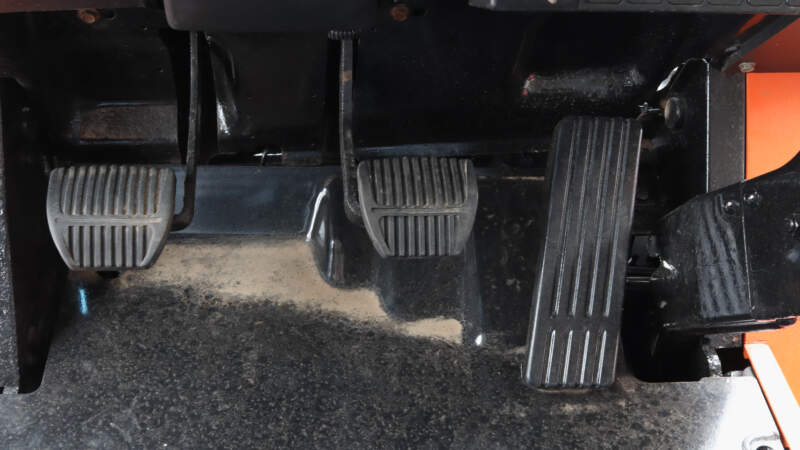 Anyone who is selling a car wants to show it in its best light, but buyers should beware of a seller that tries to control every aspect of a test drive — or one that doesn’t consent to a test drive. On a used car test drive you should put the car through its paces. Drive it in a number of different situations (merging on the highway, highway speeds, stop and go traffic) and on a number of different roads so you know what it’s like to live with.

Beware of sellers that try to control the route or prevent you from using certain systems — the radio, air conditioner or heater — during your test drive. They might be hiding a serious flaw with the car. 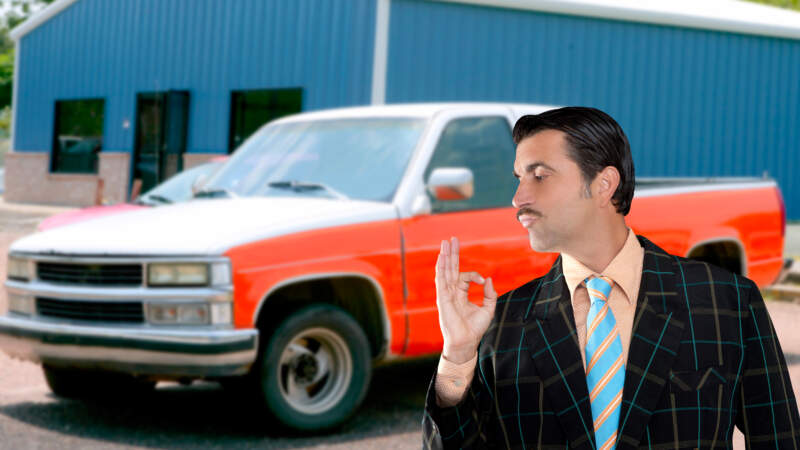 Getting a prospective new car checked out by an independent mechanic is just good sense. While you’ll spend money ($150 or so) on the inspection, avoiding a used car lemon is more than worth it. Any upstanding used car seller should consent to having the car inspected by someone you choose.

If the seller refuses to let you have the car inspected or insists you use their mechanic find someone else to buy from. Having a car inspected is a routine part of buying a used car, so sellers who refuse it may not be on the level. That’s a deal you can feel good about walking away from. 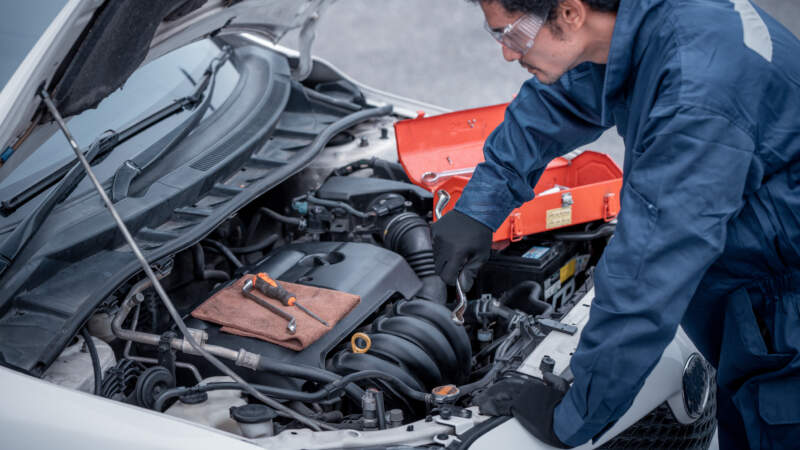 You’re probably wondering how a low price can be a red flag. A low price is a killer deal right?! While maybe, once in a blue moon, someone finds a high-quality used car with no issues at an absurdly low price, the odds of that happening are pretty gosh darn low.

More often than not, a super low price on a used car indicates that the seller wants to unload it quickly and is hoping that the vision of the dollars you’ll be thinking about saving are enough to blind you to the other issues the car has. Unless you’re willing to invest your savings on repairs — possibly costly ones — on the new-to-you car, stay away from used cars with prices that are much lower than similar models. 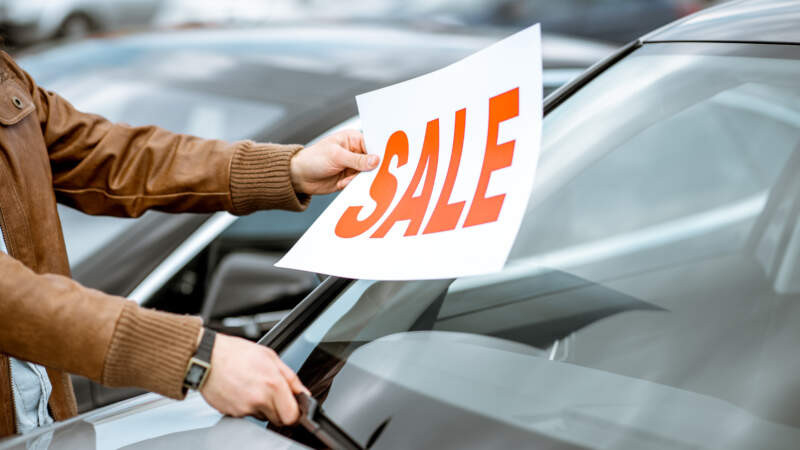 One of the best things you can do when buying a used car is to trust your intuition. If you end up dealing with a slick-talking salesperson, who seems to be making outlandish promises (or thinly veiled threats), trust your gut and walk away. Seriously, there are thousands of other cars out there. Don’t fall in love with a specific chunk of metal and plastic just because some guy with a bad haircut and cheap suit is telling you that he has three other offers on it and needs your answer right now.

This also applies to any salesman who is pushing extra costs — extended warranties, rust proofing, or any other vague charges. Administration fees? Those aren’t necessary (and are totally negotiable). Freight fees? This car isn’t coming fresh off the assembly line, it’s already on the lot. Don’t pay that either. If anything about the salesman’s high-pressure tactics rub you the wrong way, bail out immediately. 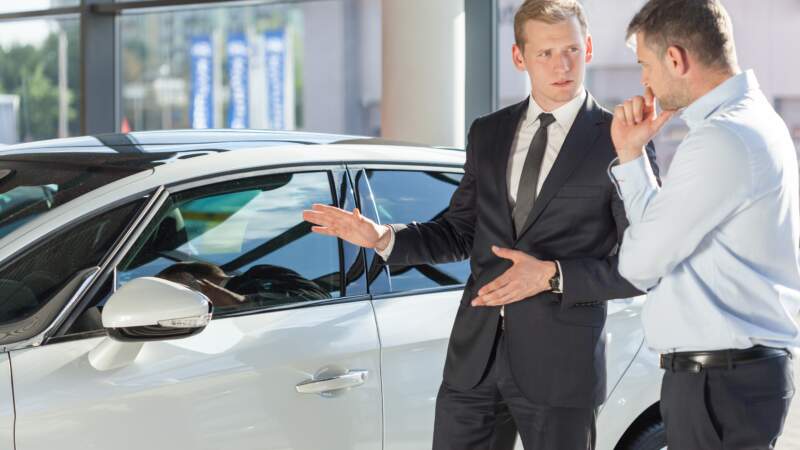 When it comes to cars, possession isn’t nine-tenths of the law. You need a car’s title to prove you own it and are legally able to sell it. If you’re working with a used seller who doesn’t have a title for the car you want to buy, stay away. Also beware of fake or improper titles. A car title is an official document issued by the state the car is owned in. It should have a state seal and other anti-counterfeit measures on it.

When inspecting the title, make sure the Vehicle Identification Number (VIN) on it matches the VIN on the car. You should also ensure the name on the title matches the name on the seller. If you buy a car with a bad title, it could turn out that you’re not the rightful owner of the car — which means you just threw your money away. 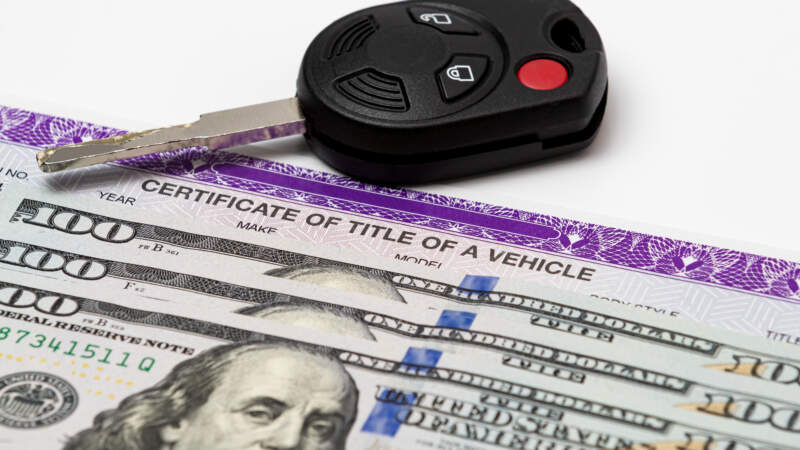 Being described as “outstanding” is usually a good thing, but not when it comes to automotive recalls. Automotive recalls are issued by the car’s automaker (sometimes after an order from the federal government) when something is wrong with the car. Many recalls are issued because of defects that could compromise the car’s safety. Fixing recalls is done at the automaker’s expense. So an outstanding recall means the previous owner couldn’t be bothered to get the issue fix. What other maintenance issues might have been neglected?

To find out if a car has outstanding recalls, you can enter its VIN at the NHTSA website. From there, you’ll be able to see what recalls the car was subject to. The seller should then provide proof that the recalls were taken care of. 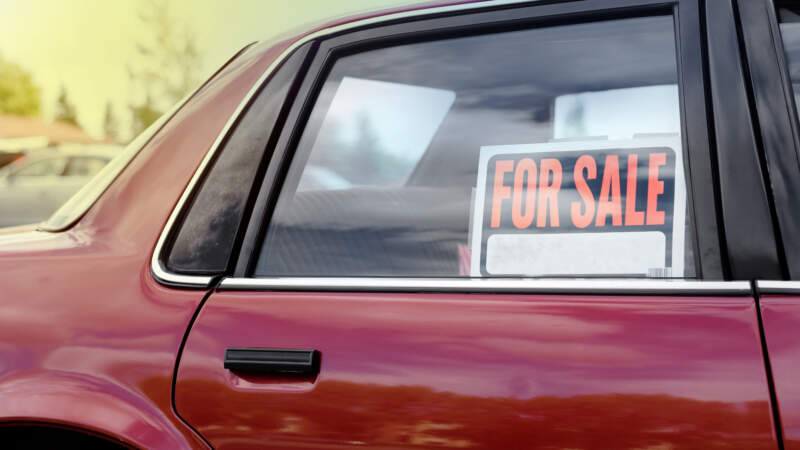