10 Real Cars That Batman Would Probably Have in His Collection

Lego and Chevrolet garnered headlines in January 2017 when they unveiled a life-size model of the Batmobile at the Detroit Auto Show. Of course, this Batmobile was made entirely out of Lego and was only made to promote the Lego Batman movie. But still, seeing a massive and seemingly real Batmobile got us thinking about other real life cars that Batman would have in his collection. After all, Bruce Wayne would have the financial means to own any car he fancied. So in the real world, what rides would suit the Dark Knight? Here’s a list of real cars that the Caped Crusader would likely have in his collection.

We’ll start with the obvious and offer up the Hummer. Of course, it would have to be black. And likely armor plated. This durable and multi-purpose vehicle (which was first developed by the U.S. military for combat use) would likely suit Batman just fine.

After all, it would be perfect for breaking down gates, crashing through walls, and generally inserting Batman into dangerous situations. The Hummer comes with all-wheel drive, can go over a wide variety of surfaces, and has ample seating and cool features such as climate control and Bluetooth. Really, what is a Hummer but a traveling fortress on wheels, right? Most people who see this vehicle in the parking lot of their local Costco find it intimidating, so it would seem like a natural for Batman to use it when fighting crime. Mount a flamethrower on the roof of this baby and you’re good to go.

The BladeGlider by Nissan already looks like a sportier version of the Batmobile. Maybe it’s the doors that look like wings or the angular body, but the BladeGlider is a sleek and sexy looking sports car that Bruce Wayne could take out on the town to impress the ladies. Although it might quietly telegraph to the world that “hey, maybe I’m really Batman too.” It would be a pretty good “in joke.” Plus the name “BladeGlider” sounds like something that Batman would use.

The BladeGlider is actually a concept car from Nissan that features some really bizarre design and engineering quirks, all of which would be perfect for the Dark Knight. The BladeGlider was, at one time, actually scheduled for production, but Nissan seems to have changed its mind. But that’s okay, since Bruce Wayne has the money and connections to get his hands on a rare one-of-a-kind concept car. It just makes the vehicle more exclusive and more valuable in the collection.

For pure speed and sex appeal, Bruce Wayne would likely have an Aston Martin CC100 Speedster in his garage. This is the kind of cool car with a retro vibe that you could see former Batman actor Adam West riding around in back in the swinging 1960s. It’s more of a fun loving, classic car than the dark and brooding Batman of contemporary cinema.

This Aston Martin is another concept vehicle built to celebrate Aston Martin’s 100th anniversary. It pays homage to the company’s racing pedigree and championship history on the track. Still, Bruce Wayne would no doubt appreciate the six-liter, V12 engine, and ability to hit a top speed of 180 mph. That power would be super helpful as he tries to keep up with his variety of enemies, or whisk some beautiful ladies around Gotham City. With only two of these cars believed to exist, it would require someone with Bruce’s deep pockets to be able to afford one.

One car that would look especially amazing parked outside stately Wayne Manor is the Morgan AeroMax. This vehicle screams luxury, style, and wealth. It’s the kind of car Bruce would take to the polo grounds or a corporate board meeting at Wayne Tower. Paint it black and add tinted windows, and you’ve got yourself the ultimate luxury Batman car.

In reality, the Morgan AeroMax was built by the British-based Morgan Motor Company and also comes in a coupe variation of the Morgan Aero 8. Only 100 models of this vehicle were manufactured, making it another rarefied car. The old-school stylish exterior is complemented by a 4.8-liter, V8 engine. In real life, several celebrities already own one of these. So it’s not too far-fetched to think that Bruce Wayne would too. After all, he’s a classy guy.

Another car that looks like it could be a new spin on the Batmobile is the Maybach Exelero. Stylish but long, dark, and large, this car looks like it was drawn for the 1990s Batman cartoon. With a price tag of $8 million, Bruce Wayne would likely be one of the few people in the world who could afford to buy a Maybach Exelero. This is one pricey luxury vehicle. And there’s a good reason for that.

Only one of these cars exists – in the entire world. The Maybach Company built this one-off prototype as a special request for a wealthy patron. No other versions were manufactured. With a twin-turbo, V12 engine under the hood and a top speed of 218 mph, the Maybach Exelero has the power necessary to serve as a worthy Batmobile. But given the car’s incredible level of exclusivity and style, would Batman risk damaging it as he chased the Joker and Penguin through the streets of Gotham? Perhaps not.

You know Bruce Wayne would have a Beemer or two in his collection, but he would certainly find room for BMW i8. Not only would this car provide the style and handling that Wayne would demand, but the i8 is also loaded with technology and awesome features. We all know how much Batman enjoys his toys.

The gadgets on the fully loaded version of this car would likely keep Batman busy for days. Plus, this BMW would cut a cool appearance rolling up to any red carpet event and give Bruce a dramatic entrance befitting of any superhero. Or playboy billionaire. With a coat of black paint offset by signature blue highlights, supervillains would no doubt gawk and then cower at the sight of this hybrid-electric bad boy. The BMW i8 is fast, sleek, and efficient — just like the Dark Knight himself.

Who needs 707 horsepower? Batman, that’s who. And the Dodge Challenger SRT Hellcat provides all that and more. A muscle car for modern times, the Hellcat is the type of vehicle we could see Dick Grayson, aka Robin, trying to sneak out with for a date on a Saturday night. It’s also the type of car we could see Bruce Wayne ripping his way to a meeting with Commissioner Gordon in. Pure power and sex appeal, baby.

The Challenger remains almost unrivaled in terms of performance. Other cool features include a 6.4 liter, Hemi V8 engine, and a six speed manual transmission. And you know that Batman drives a stick! Capable of hitting 60 mph in 3.6 seconds, we expect that Bruce Wayne would be reluctant to share this Hellcat with Robin or anyone else.

No self-respecting crime fighting billionaire can claim to have a car collection without a mint condition Ferrari on display. And the 458 Speciale is about as Italian a car as a person can get. This is the Ferrari of choice for people who have serious money and serious taste. If Bruce Wayne could only have one Ferrari, it would have to be the 458 Speciale. It might be the one car he doesn’t paint black.

A 4.5-liter V8 engine that purrs out nearly 600 horsepower, this is a car that would turn heads all over Gotham City. The lovely ladies would swoon at the sight of this car pulling up in front of a casino or nightclub, and the villains of Gotham ]would certainly cower at the sound of the engine wailing as Batman rolls up on them. The LED lighting and Corinthian leather interiors aren’t too shabby either.

If you go Corvette, it’s gotta be a Stingray. Given that Bruce Wayne is first and foremost a proud American, we would assume that he would want to have a Chevy Corvette Stingray in his collection. I mean, who wouldn’t – superhero or not? This is one fine American muscle car.

In fact, this car is so similar to the Batmobile that film director Tim Burton modeled the Batmobile featured in the original 1989 movie Batman after a classic Corvette Stingray. So really, you could argue that this ‘Vette served a prototype of sorts for the Batmobile. So cool. Bullet proof this car and let it loose on the villains of Gotham.

What is more ballin’ than a Lambo? If Batman is going to have a Lamborghini in his collection, you can bet it will be a Sesto Elemento. This car screams of a superhero kicking butt and taking names. It really is the perfect car for the modern day caped crusader. After all, the Sesto Elemento is a prized car all over the world and one that the super-rich would love to get their hands on.

This car incorporates incredible styling and design that includes an angular aerodynamic exterior that looks suspiciously like the bat symbol. It also provides plenty of power with a 5.2-liter V10 engine that supplies 570 horsepower. There were only 20 of these Lamborghinis built, and the manufacturer considers them one of the top cars they’ve ever produced. Our only question is, can you get it in black? Bruce Wayne surely can. 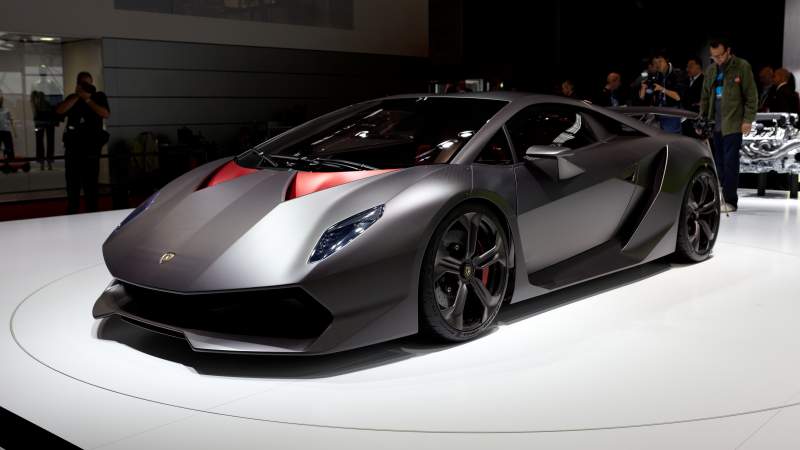