10 Most Popular Midsize SUVs and Crossovers

Buying a new vehicle at any time is a big decision. When you are looking for your next vehicle, one great option to consider is a crossover or midsize SUV.These cars provide a lot of benefits including style, safety features, luxury, and can even come at an affordable price.

Here are 10 crossover and midsize SUVs in particular that continue to be among the most popular vehicles on the road.

The RAV4 is a very popular crossover SUV that has been produced and sold by Toyota for nearly 25 years. This SUV is the best-selling SUV on the market today as more than 407,500 sold in 2017 alone.

There are a variety of reasons why the RAV4 continues to do very well with consumers. One of the main advantages is that it has strong safety features, which are as good as any other vehicle in its class. The RAV4 also get great fuel efficiency for a SUV as it gets up to 30 mpg when driving on the highway. While there are plenty of advantages of the RAV4, one common complaint is that it gets only 175 horsepower in its base engine options.

In 2017, more than 405,000 Nissan Rogues sold to consumers. This was a 22 percent increase compared to the prior year, which makes many believe the car could soon be the most popular crossover SUV on the road.

The Rogue has frequently been admired for its good safely ratings and excellent fuel efficiency of 33 mpg. With then 2018 model year, the Rogue introduced several new tech and safety features that are popular with consumers. This includes the ProPILOT Assist driving assistance and the inclusion of the Apple CarPlay system. One complaint about the new model year is that it no longer has the optional third row, however this does create more cargo space.

The Honda CR-V is the third most popular crossover SUV in the market today with total sales in excess of 375,000 per year. While this is a good number, sales increased only by 5.8 percent over the prior year.

One of the strong selling points of the CR-V has been engine performance. The 190-horsepower engine is stronger than most SUVs in its class. At the same time, fuel efficiency of up to 34 mpg on the highway is also very attractive. One complaint that consumers have is that the base model has very few features included.

Ever since it was first introduced with the 2001 model year, the Ford Escape has continued to be one of the most popular SUVs in the world. Consumers bought around 308,000 Escapes in 2017 alone.

For those that are looking for more control and power, upgrading the brand new turbocharged engine is often a good option as it can produce up to 245 horsepower. However, the base engine option will produce only around 168 horsepower. In 2018, Ford also introduced the new SEL trim, which comes with a variety of new luxury and tech features.

With the 2018 model year, the Equinox was completely redesigned. This included rebuilding the interior and revamping the engine options. Those that are looking for a lot of power will enjoy the 252-horsepower engine, which also comes with a decent 28 mpg when driving in the city. Those that are willing to forego engine performance for fuel efficiency, picking the standard 137 horsepower engine should be satisfactory. This engine option will provide fuel efficiency of up to 40 mpg.

Another Ford vehicle that has been a staple with SUV lovers for decades is the Ford Explorer. This SUV has been produced since the 1991 model year and continues to impress buyers with its annual advancements. This SUV comes with a standard 280-horsepower engine. However, those that want a lot of power can get an engine that will produce upwards of 365 horsepower. One drawback is the lack of fuel efficiency, which is below 20 MPG when driving in the city.

One of the oldest SUVs that is still on the road today is the Jeep Grand Cherokee. This SUVs product line dates back more than 40 years and continues to be a top seller today as 240,000 were sold in 2017.

The Grand Cherokee comes standard with a 240-horsepower engine. However, those that want a lot of performance will want to consider the 707-horsepower supercharged V8 engine that comes with the Grand Cherokee Tomahawk trim. This is one of the most powerful SUV engines on the road today. The 2018 model year was also enhanced with many new tech and style upgrades, including a new 7-inch display.

Those that are looking for more space along with powerful engine options will want to consider the Toyota Highlander. In 2017, more than 215,000 Highlanders were sold as consumers continued to be attracted to the strong engine performance, fuel efficiency, and comfortable cabin. This SUV comes with a V6 engine that can be upgraded to produce nearly 300 horsepower. Fuel efficiency is adequate for most as the base model will get 27 mpg on the highway and 21 when driving in the city.

While it lost some buyers in 2017, the Jeep Wrangler continues to be one of the more popular SUVs in the market today. In 2017, just over 190,000 Jeep Wranglers were sold. This was about a one percent decline compared to the prior year. Despite the dip in sales, they are expected to increase in the coming year as the Wrangler when through a full redesign.

The newest model of the Wrangler comes standard with a 270-horsepower engine that is ideal for those that are looking for a lot of performance. It also comes standard with 4WD, which is unusual compared to other vehicles in its class that typically only allow AWD with an upgrade. One downside to the Wrangler is that the fuel efficiency of around 25 mpg on the highway is low compared to others in its class.

Overall, Subaru is continuing to increase in popularity with consumers and the Outback continues to be one of the best-selling vehicles that the company sells as over 175,000 sold in 2017. The Outback also comes standard with AWD, but the base engine option is considered weak given its 175-horsepower product. However, the Outback does get good fuel efficiency of up to 32 mpg when driving in the city. Drivers that are willing to sacrifice some fuel efficiency also have the option of upgrading to the 256-horsepower V6 engine. 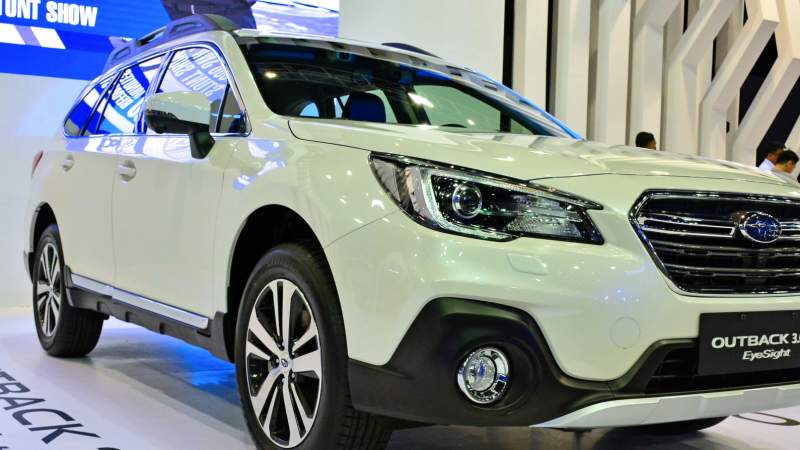