10 Hidden Costs To Watch Out For When Leasing a Car

Car companies today are aggressively pushing leases. How many television ads have you seen that exclaim “lease from only $59 a week” or “lease to own for only $139 bi-weekly?” The crux of these ads are that it’s cheaper to get into a new vehicle by leasing it than by financing the purchase of a car. However, this is not always the case.

As with most advertisements, some creative licenses have been taken when extolling the benefits of leasing a vehicle. In reality, leases are often much more expensive than advertised. They can end up costing much more than financing a new ride. There are plenty of hidden costs, extra fees, and penalties charged on some leases. Sadly, most people aren’t aware of all the hidden extras until their wallets have taken a hit. Here are 10 things to watch out for if you’re thinking about leasing a car.

Anyone considering leasing a car should always factor in the interest and taxes that will be charged. The advertised price is just the beginning in terms of the true cost of a lease. While you can negotiate some lease charges, it is very difficult to negotiate on the interest rate, and impossible to negotiate the taxes. While some U.S. states offer tax breaks on car leases, they are usually not enough to compensate for the high interest rates charged by car dealerships.

When it comes to leasing a car, most car dealerships will hit you up for administrative fees twice. First when you initially lease the car and a second time when you return the car. In both instances, the administrative charge runs between $500 and $750. This cost is, apparently, for the administrative staff at the dealership to process the paper work related to your lease.

While most people are not surprised to see an admin charge when they initially take out the vehicle lease, most people are quite shocked to be hit with a second charge at the end of the lease period. Especially as the administrative charge can be much higher the second time than the first. After all, $700 in administrative costs to cancel a lease seems pretty steep to us.

Have you lost your job? Gotten sick? Been transferred by work and need to move? Are you retiring or downsizing? Any and all of these life developments would be legitimate reasons for you to get out of your lease early. Just don’t try and tell that to the car dealership. If you need to terminate a lease for any reason before the term end date, you will likely be hit with a termination fee. How much is the termination fee? It varies but it often ends up being the full remaining amount on a lease.

Many a person has terminated their lease early, only to find that they are on the hook for the full cost of the lease anyway. If you find that you need to get out of a lease early, visit a website like Leasebusters. They can helps find someone to take over a lease. Also, ask the dealer about what’s known as “Walkaway Protection,” a form of insurance that lets people get out of a lease early without paying penalties. A select few car dealers offer Walkaway Protection free in the first year of a lease agreement.

Most leases enable you to drive 12,000 to 15,000 miles per year. Some leases have mileage limits set as low as 10,000 miles per year. Regardless, if you go over that set amount, you will pay handsomely for it. Typically, the charge for each mile over the limit is 10 to 20 cents per mile. That may not sound like much, but it adds up in a hurry.

For example, if you drive 18,000 miles instead of the set 15,000 miles in each year of a three-year lease, at 20 cents for each additional mile, you’ll owe a whopping $1,800 at the end of the lease. That’s equates to an extra $50 a month over the duration of a lease period. Extra mileage is where most car dealers make their money on leases. The truth is that they set the mileage limits so low that it is nearly impossible for most people to remain under the annual limit.

Should you have the misfortune of going over the mileage limit, the dealer could tell you that they have no choice but to sell the car you returned at auction. The dealer may then tell you that you are responsible to cover the difference between what the car sells for at auction and the initial value of the car that they calculated based on you staying within the annual mileage limit.

The dealership calculates that your car will be worth a certain amount of money at the end of the lease period. Let’s say $13,500, for example. This is based on you driving only 12,000 miles a year. If you drive more than 12,000 miles per year, the dealer will then decide that the car is no longer worth the estimated $13,500 it calculated and move to sell it at a vehicle auction. If the dealer gets $10,000 for the car at auction, it could then come back to you and say you owe the difference between the $13,500 it initially estimated the car value at and the $10,000 recovered at auction. That leavess you on the hook for $3,500. Not good! Read your lease agreement carefully to make sure you don’t agree to anything like this.

The down payment requirement is often hidden in the fine print of a lease agreement. Sometimes it’s referred to as a “capitalization cost.” The larger the down payment, the lower the monthly lease payments are. However, when calculating the true cost of a lease, you should always factor in the down payment. If you have a three-year lease and put a $5,000 down payment on it, then be sure to divide $5,000 by 36 months. It technically adds $138.89 a month to your lease payment. Be aware of the “true cost” of your lease.

By this point, you may think that we have covered nearly all of the fees associated with a lease. Not even close. In addition to the fees we have already mentioned, there are many other fees that can be found within the fine print of a lease. These include acquisition, documentation, purchase option, and disposition fees, to name a few.

Acquisition fees are charged at the start of a lease and typically run about $500. A disposition fee is charged when you return a car at the end of the lease and it covers the cost to dispose of the car. Disposition fees tend to run between $300 and $600. A purchase-option fee is the amount it will cost to purchase the car at the end of the lease, and that amount can be $10,000 or more. The bottom line is that all of these one-off fees really add up. It can get expensive in a hurry. Oh, and don’t forget the registration fee.

Any vehicle that is driven for three years or longer is going to experience some wear and tear – no matter how careful the owner happens to be. Little nicks and scratches on the body are to be expected. Unless, of course, you are leasing a car. In that case, you can expect to be charged a lot of money for every little nick, scratch, or other imperfection in the vehicle you leased. This includes the interior of the car as well as the exterior.

Any salt stains, coffee stains, or worn fabric will come back to haunt you in the form of a hefty cleaning bill. While most dealers will tell that they don’t charge extra for “fair wear and tear,” you’ll eventually learn their definition of his is extremely unforgiving. Trust us when we say you will pay for even the tiniest amount of wear and tear. Even the fees to clean the car after you return it will seem excessive. This is all gravy to the car dealers.

Sticking with the issue of wear and tear for the moment, keep in mind that most car dealerships require that people put down a security deposit when leasing a vehicle. Also remember that it is basically at the dealer’s discretion whether they refund that security deposit or not. Security deposits tend to range between $500 and $1,000.

While you might assume that you will see that money again when you return the car, dealers often end up keeping it (or only refunded part of it) claiming that the vehicle is excessively worn or has been damaged while you drove it. Best thing to do is ask people you know who have leased a car if they got all or any of the security deposit back on their lease. You may be surprised by the answer.

This is the most annoying of hidden lease fees. Here is how the infamous “money factor” works. The money factor is tied to the interest rate charged on a lease and is expressed as a decimal — let’s say .00260. A dealer might tell you that the lease has an interest rate of 2.6%. But then they apply the money factor of .00260 to the calculation.

You might think that you are still paying 2.6% interest on the lease. However, with the money factor of .00260 added to the equation, the interest rate actually comes out to 6.24%. And an interest rate of 6.24% is a hell of a lot higher than 2.6% – nearly two and a half times higher to be exact. Always watch the money factor, it can screw you if you are not careful. 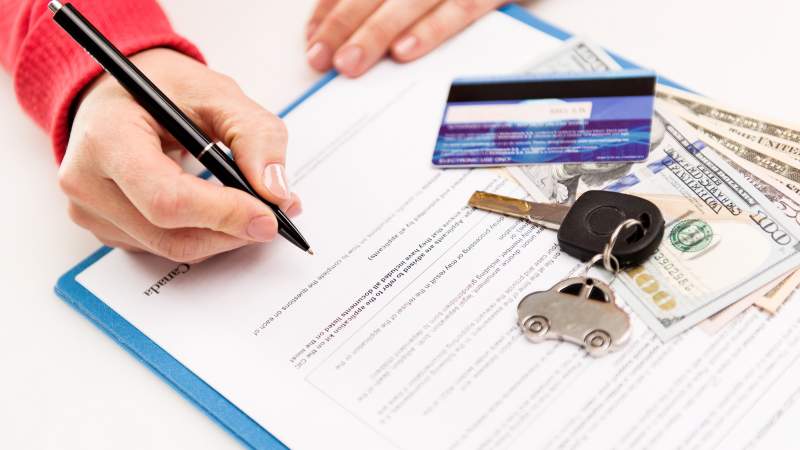