It’s a scientific fact (seriously, where’s my Nobel Prize for discovering this?) that you’ll never look cooler than you do when you sit on a motorcycle. This was verified by Marlon Brando, James Dean, Dennis Hopper and Arnold Schwarzenegger. In addition to making you look bad to the bone, riding a motorcycle gives you a visceral connection to the road. That translates into plenty of thrills. Beyond the inherent “badassery” that comes from riding a motorcycle, it can also be an economical way to get around.

But it does require some skills and they can take time to develop fully. While you can get a motorcycle license by taking a weekend class in most states, that doesn’t mean you’re ready to mount a full-size bagger or super-fast sport bike. Starting off with a beginner motorcycle can be a great way to safely grow your motorcycle riding skills. Here are ten great bikes for new riders.

People who really know what they’re talking about agree that the Honda CB300F checks all the boxes for a great beginner motorcycle. It’s affordable to buy and own, easy to ride and doesn’t have so much power that it will overwhelm a beginner.

The CB300F is a lightweight bike with a single cylinder, fuel-injected engine. For someone just getting into motorcycle riding, that makes the CB300F easy to live with on a day-to-day basis. Beyond its light weight and just-powerful-enough engine, the CB300F has a slightly upright riding position that makes balancing easy. At under 350 pounds (158 kilograms) and a seat height of just under 31 inches (78.74 centimeters), the CB300F shouldn’t be all that punishing for most people to ride [source: Honda]. Plus, Honda says the CB300F gets up to 71 miles per gallon (30.18 kilometers per liter), which will make getting plenty of riding time an affordable proposition. All-things-motoring website Jalopnik even went so far as to call the CB300F “the best first motorcycle ever,” which is a compliment that’s tough to beat.

Harley-Davidson is a storied motorcycle brand best known for their big baggers, cruising bikes and leather-clad image. But most Harley-Davidson bikes are too big and powerful for most beginner riders. What’s a new biker who wants to ride some of the best American iron out there to do?

If only a Harley will do and you’re a newbie, check out the Buell Blast. Plenty of Harley-Davidson riders took their first riding course at a Harley dealership, which means many of them got their start on a Buell Blast. Buell was a subsidiary of Harley-Davidson. Last made in 2009, the Buell Blast is a pretty easy used bike to find, and being used means that the Blast is a pretty affordable way to get into riding. The Blast weighs in at just 360 pounds (163.3 kilograms) and has two available seat heights: 27.5 inches (69.9 centimeters) and 25.5 inches (64.8 centimeters). This means you can be vertically challenged and still ride it [source: Popular Mechanics]. When it was new in 2001, Popular Mechanics said, “For tooling around town, keeping up with traffic on the highway and getting the basics of motorcycling under your belt, the Blast shines.”

The Suzuki SV650 makes this list as a beginner’s motorcycle that you’re not likely to outgrow any time soon. See, most experts recommend that beginning riders don’t go for a bike that’s too powerful because all that power can be tough to handle for a newbie. The problem is, once a beginner gets their wheels under them, so to speak, that starter bike starts to feel a little pokey. Enter the SV650. Best Beginner Motorcycles said that the SV650 exists in that Goldilocks zone of not having an overwhelming amount of power for a beginner, but having enough to keep an intermediate rider interested.

Powered by a 645 cc V-twin fuel-injected engine, the Suzuki SV650 makes 70 horsepower and gets between 50 and 55 mpg (21.3 and 23.4 kilometers per liter) [source: Best Beginner Motorcycles]. Another thing the SV650 has going for it is the variety of farings it offers. Farings are additional parts to alter your motorcycle’s looks and improve aerodynamics. In the case of the SV650, you can get it with no farings (sometimes called naked) or with farings shrouding pretty much everything from the headlight back over the engine, which gives it more of a sport bike look.

Classic bikes look cool, but they can be temperamental – too temperamental for a lot of beginners. You have to deal with finicky transmissions, unreliable engines, complicated starting systems and stiff suspensions – not to mention that older bikes aren’t going to have features like anti-lock brakes to help you avoid an accident. When it comes to motorcycle ownership for new riders, you don’t necessarily need a new bike, but you don’t want one that’s too old and troublesome, either.

This sounds like a job for the Triumph Bonneville. It has classic café racer styling, without classic café racer reliability and safety issues. At 495 pounds (224 kilograms), the Bonneville is a bit bigger than most other bikes on this list [source: Triumph]. However, it gets 57 miles per gallon (24.23 kilometers per liter) on the highway and makes 68 brake horsepower — well within the range of what most beginners can handle. Anti-lock brakes also help make the Bonneville safer than older bikes with the same look. As Complex says, the Bonneville, “It provides all the basics, which is so important for beginners.

For some people, a Harley is the entire reason they want to learn how to ride. Unfortunately for those people, the Harley they’ve been lusting after is probably too overwhelming right off the bat. While a Buell Blast is a great sport bike for aspiring Harley owners, some new riders just can’t wait.

That’s where the Sportster comes in. Harley’s smallest model family, the Sportster clan has had a number of members, but the 883 is the one considered best for beginners. With a 25.7-inch (65.3 centimeters) seat height, the Sportster 883 isn’t too far off the ground, which makes balancing and standing at a stoplight easier. Its engine is fuel-injected and air-cooled, and it also makes 53.8 pound-feet (72.9 newton meter) of torque while getting 51 miles per gallon (21.68 kilometers per liter) [source: Harley Davidson]. Ask Men notes that the Sportster has relatively little power for a Harley, which makes it a great hog to get some cruising miles on. It’s also lighter and more maneuverable than most other Harleys, as well as less expensive.

The Kawasaki Ninja was all over the first generation of “Grand Theft Auto,” and while we don’t recommend it for going on a crime spree, it is a great beginner’s bike. As Adventure Seeker says, “In terms of entry-level sports bikes, this is it … If you’re looking to ride sports-style motorcycles in the future, this is the perfect starter bike.” Jalopnik also calls it the “quintessential first bike,” because it’s so easy to find and easy to ride.

The 2015 Ninja has available anti-lock brakes and weighs just under 384 pounds (174 kilograms) [source: Kawasaki]. A 296 two-cylinder engine provides power, and a new Ninja starts under $6,000 (under $5,000 if you pass on the anti-lock brakes, which we don’t recommend — $1,000 is a small price to pay for an extra measure of safety). Not only is the Ninja affordable at the dealership, but it gets up to 66 miles per gallon, so you won’t go broke fueling it up. The one downside of the 2015 Kawasaki Ninja? It’s only available in two colors.

Yamaha makes a number of good bikes for beginners (yours truly learned on a Yamaha SR400), and the FZ6R is one of the best Yamaha bikes available for new riders. While some good beginner motorcycles look a little stripped down, the Yamaha FZ6R has full-on sport bike styling that makes it at least look fast and powerful, even if your skills can’t quite handle the most powerful sport bikes yet.

The Yamaha FZ6R has a low seat at just 30.9 inches (78.5 centimeters) from the ground and an efficient fuel-injected single-cylinder engine that gets up to 43 miles per gallon (18.28 kilometers per liter) [source: Yamaha]. It has a six-speed transmission. While the FZ6R is a little heavier than other bikes on this list with a wet weight of 470 pounds (213 kilograms), it has a secret weapon: Its seat is adjustable, making it semi-customizable for you and a lot easier to ride than a bike with a seat that doesn’t adjust. At 600 cc’s, the FZ6R is powerful enough to keep up with you as your skills develop.

The KTM Duke is a series of motorcycles, all of which are fit for beginners. If you want to buy newer, the 2015 KTM 690 Duke is lightweight, coming in at 342 pounds (155 kilograms), and has a comfortable riding position thanks to its wide-grip handle bars [source: KTM]. All models in the Duke line have anti-lock brakes, while the brakes themselves are Brembo brakes, which provide good stopping power.

The Duke 690 has a six-speed transmission and an electric starter. Its engine is liquid-cooled, which lessens the risk that it will overheat if you’re stuck in traffic on a hot day. Its seat height is about 32 inches (81.28), making it comfortable for riders of a variety of statures. Other Duke models include the 390, 200 and 125. None have earth-shattering amounts of power, but all have enough to keep up with the flow of traffic while growing your riding skills.

A major consideration for beginner motorcycle riders who are looking for a bike is price. After all, you don’t want to lay out a lot of cash on a bike you might outgrow. Even when you’re shopping starter bikes, it’s tough to find one as affordable as the Honda Rebel 250, which starts at just over $4,000 [source: Honda]. Seriously, it can be tough to find a used bike with Honda reliability at a price that low.

In addition to that small starting price (imagine how affordable a used one would be), the Rebel 250 has retro styling, a 234 cc engine and gets up to 84 miles per gallon (35.71 kilometers per liter), so it’s cheap at the dealership and at the gas pump. The Rebel’s seat is 26.6 (67.6) inches off the ground, making it easy to put both feet flat on the ground when you stop. That low seat height also aids parking and other slow-speed maneuvers, which helps you gain confidence while you improve your skills.

Most, but not all, of the bikes on this list are available new and most will work for most new riders. Still, when you have that shiny new motorcycle license burning a hole in your pocket, it’s tempting to go out and get the biggest, shiniest and newest bike you can afford. That’s a mistake, no matter what the sales guy at the Harley or Ducati dealership says.

Before you shell out for your dream bike, take the time to build your skills on a small, affordable used motorcycle. You’ll have something that you can gain confidence and skills on without making a big investment. When you drop it – and you will drop it – you won’t be out thousands of dollars. With the number of people who buy beginner bikes and then trade up for something bigger or more powerful, there are plenty of affordable used bikes on the market. Look for something inexpensive and small, with a similar riding position to the kind of bike you eventually want to get. Take the time to get comfortable on your new-to-you two-wheeled teacher. When you’re ready for your dream bike, sell your starter bike to another new rider and keep the great biker wheel of life turning. 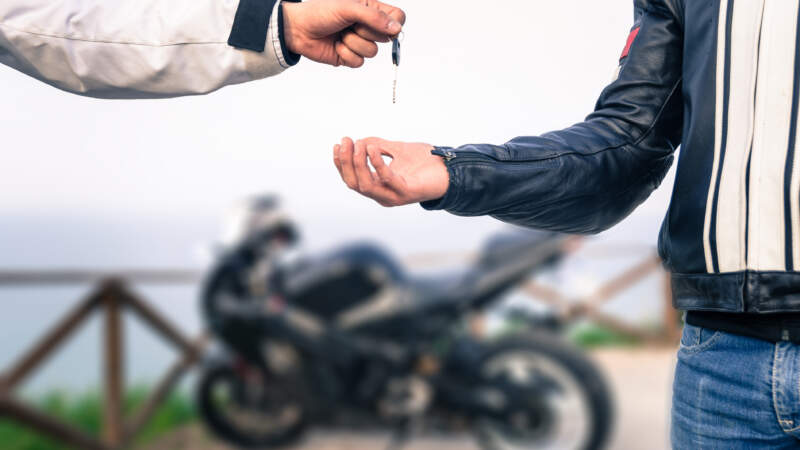