Ford got a lot of press recently when it announced the resurrection of the Bronco. The iconic Bronco, made infamous during the O.J. Simpson freeway chase, was welcomed back warmly by automotive journalists and the public. Sales of the returning SUV are expected to help boost the fortunes of Ford. The relaunch of the Bronco got us thinking, though. What other iconic discontinued vehicles would we love to see resurrected? Here are 10 cars, trucks, and SUV models that we feel should stage a comeback.

The Dodge Viper was a popular supercar for more than 20 years. Posters of the Viper use to adorn the bedroom walls of teenage boys everywhere. But with a starting price of nearly $80,000, the Viper could never really compete with the much cheaper Corvette. Plus the Viper never came with an optional automatic transmission. Who can still drive a stick these days?

For these reasons, sales of the Viper suffered. Dodge finally decided to pull the plug on the masterful Viper brand in 2017. Interestingly, that was actually the second time Dodge walked away from the Viper. The company initially canceled production of the car in 2010. Then they brought it back in 2013 after growing demand from the public. Sales never took off though. Dodge said goodbye to the Viper for good in 2017. Given its popularity with the public, we feel that a somewhat cheaper version of this supercar would be welcome back with open arms.

It might be hard to remember now, but the Chevy Volt made a major impact when it debuted in 2010. It was one of the first gas-electric hybrid vehicles of its type. The Volt saw strong sales in its first few years of production. Critics and the public loved this vehicle.

However, after a second-generation refresh in 2016 and a record milestone of 100,000 models sold that same year, declining sales set in. Newer, sleeker, and more efficient hybrids were popping up left and right. The Volt was discontinued by GM in 2019. But given its hybrid pedigree, GM could potentially resurrect the Volt as a 100% electric car. With electric vehicles now taking off in earnest, the Volt could be a popular brand with consumers. The brand recognition could make bringing the Volt back fairly easy.

The Z3 is the preferred car of many BMW aficionados. For purists, its doesn’t get much better than the sporty Z3. BMW first introduced the Z3 to the mass market in 1996. It was a revival of the brand’s lightweight, low-power machines that handled like they’re on rails. This relatively stripped-down Beemer enjoyed immediate success. It hit a level of popularity rarely seen in the automotive space, especially as a model that was considerably different than the traditional BMW sedans.

However, despite its initial popularity, BMW dropped the Z3 in 2002. They replaced it with the Z4, which wasn’t nearly as sexy or road focused as the original Z3. Nearly two decades on, we think BMW should consider bringing back the Z3. Fans would love it. It could help attract a whole new generation of consumers to the famous German brand.

The Focus was a classic sedan that got thrown on the scrap heap as Ford discontinued almost all of its traditional car models in order to focus exclusively on trucks and SUVs. Even while most Ford sedans were canceled, discontinuing the Focus seemed inconceivable. It had long been one of the automaker’s best-selling vehicles. Despite that, when Ford announced that it was killing off its entire car lineup (minus the Mustang), it was curtains for the Focus.

Ford now sells the Focus only in Europe. Originally, reports suggested that Ford would at least keep a rugged “active” model alive in North America. However they decided against it in the end. But surely there is still a place for the beloved Focus, right? It was always a strong seller for Ford. There must still be a market for smaller sized cars. After all, college students have to drive something.

Another much loved sports car that is, sadly, no more is the Nissan 370Z. The sexy roadster that was a favourite of critics and fans. Discontinuation seemed a sad fate for a car as cool as the 370Z. However, the writing was on the wall for a long time — Nissan hadn’t upgraded the car since the 2009 model. Nissan did offer a 50th anniversary special edition for the 370Z Coupe, but neglected the Roadster completely.

Discontinued since 2017, it wouldn’t be out of line to bring back this sporty car. Older models of the 370Z Roadster are gaining in popularity with collectors. A new (perhaps all-electric) model of the 370Z could prove popular with consumers – provided the pricing is right.

Saturn was a revolutionary (but ultimately forgettable) brand killed off by GM’s financial woes of the late 2000s. While it was responsible for loads of innovation, including plastic body panels and center-mounted gauge clusters, its most notable claim to fame was the 2007-to-2009 Sky roadster. Although this two-seat sports car lasted only three model years, it made a mark with its wild styling and 260-horsepower turbocharged Redline engine.

The Sky reached 60 mph in just 5.8 seconds, making it the quickest model in the brand’s history. However, nifty innovations and blazing speed were not enough to save the Saturn Sky. It was canceled (along with the entire brand) back in 2009. While there’s no need to bring back the entire Saturn line-up, we would make a special case for resurrecting the Sky. It was always the best Saturn model, anyway.

Here’s one for the moms and dads out there. The Dodge Grand Caravan had been the top selling minivan in North America since 1985. That didn’t stop it from being discontinued after 2020. In fact, the Grand Caravan practically invented the minivan segment. It’s the original minivan! Families have loved it for generations and sales have never really declined. So why cancel it?

Fiat-Chrysler decided to discontinue both the Dodge Grand Caravan and the Chrysler Town & Country minivans in order to drive sales of the newer Chrysler Pacifica. However, the Pacifica is aimed at competing more robustly with higher-end (and more expensive) people movers such as the Honda Odyssey and Toyota Sienna. That leaves a big hole in the “roomy family vehicle on a budget” market that the Grand Caravan owned for so long. Given its enduring popularity, we feel it’s only a matter of time Dodge is forced to bring the Grand Caravan back to appease price sensitive suburbanites. Fingers crossed.

The beloved Beetle has been killed off by Volkswagen multiple times, but always comes back to life. Here’s hoping that one more resurrection is possible. The Beetle, after all, has been around (on and off) since the 1940s. It was originally built by the German military during World War II. Since then, it has developed a large and loyal fan base. There’s even a movie franchise devoted to the beloved Beetle — Herbie: The Love Bug.

Despite its enduring popularity, Volkswagen got rid of the Beetle yet again in 2019. These days, consumers who are looking for a small VW vehicle overwhelmingly prefer the Jetta sedan or a Tiguan SUV. That’s too bad, because neither of those vehicles have proven to be as popular or iconic over the years as the instantly recognizable Beetle. Recent reports suggest that Volkswagen might be considering resurrecting the Beetle as an electric car. That would be an exciting development in the car’s already-rich history. It would prove, once again, that this classic car might be too good to kill off forever.

For many years, the XJ was Jaguar’s flagship car. The large XJ sedan helped to reinforce the comfort, luxury, and performance that the public has come to expect from Jaguar. Yet, the XJ is now kaput. The car has been canceled, even though a rightful successor has not been named.

Similar to other vehicles on this list, the XJ has been replaced by new, electric-powered sedans. Jaguar hopes the green shift will reposition the company well for the future. The XJ was one of the very last of the big, gas-powered Jaguar sedans. It was a sedan that never compromised on quality or comfort. Yet, why not resurrect the XJ as an electric car then? If Jaguar can make other electric vehicles, a brand new version of XJ should be among them.

Mercedes-Benz killed off the entire Smart Car brand in North America. That was a real shame given how good the compact cars were for the environment. The models were also popular among certain consumers, particularly younger drivers. The tiny microcars fell victim to the declining popularity of small cars in the United States and Canada. Parent-company Mercedes-Benz crunched the numbers and announced that the Smart brand would be killed off in the U.S. market. (Although they remain active in Europe.)

The discontinuations included the most recent Smart model, the 2019 electric-powered EQ Fortwo. While tiny cars seemed to catch on with environmentalists and anyone looking to save on gas, they couldn’t fend off gas guzzling SUVs that continue to be popular with the majority of motorists. However, as consumers begin to embrace battery powered vehicles with greater aplomb, might there still be a place for Smart Cars? We think the Daimler AG execs should make resurrecting this vehicle a priority. 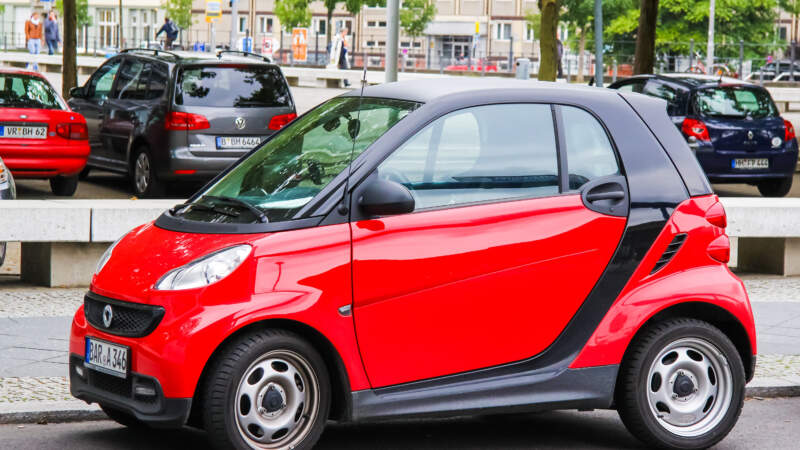