When you think about it, a racetrack only has one purpose: to be driven around as fast as possible. The surrounding structures, like the grandstands, restrooms, pit buildings and concession stands, don’t have a lot of other uses either. Unlike an old big-box store, office building or school, when a racetrack is past its useful life, it can be hard to repurpose. Repurposing a site so large is expensive and creates environmental concerns. Sure, you can build on the land, but there will no longer be a track.

That’s why when a racetrack is no longer in use, it often sits abandoned. Long after the engines are silent, the crowds are gone, the last beer is drunk and the last hot dog is eaten, the track remains. Amazing feats of speed once happened on these 10 racetracks, but now they’re desolate.

One problem with owning a racetrack is that you don’t get a lot of use out of it in the winter. (I live close to the New Hampshire Motor Speedway, and let me tell you, no one is plowing the track once the snow falls.) The owners of Twin City Raceway didn’t have to deal with too much snow, since the track is in South Carolina, but they did have to deal with cold fans. How did they do it? They wrapped the stands in tin and put woodstoves underneath for warmth. Nothing like watching a race while your buns slowly cook, is there?

Twin City was a quarter-mile (402-meter), high-banked track, like many tracks around the U.S. — but the heated grandstands made it remarkable. Those stands let Twin City host races on Christmas Day when most tracks were silent, giving local residents a handy excuse to get away from bizarre Uncle Al [source: Williamson].

As innovative as heated grandstands were, they weren’t enough to keep Twin City open. It closed in 1968, but if you drop by, there’s still a lot of the dirt track left [source: Wilson].

If you’re in Tulsa, Oklahoma, and want to check out a race, you can head to the Tulsa Raceway, which hosts all types of drag races on its 60-foot (18-meter) wide concrete drag strip. It has seating for 10,000, so you should have plenty of company [source: Tulsa Raceway Park]. If you want to have some privacy and see an abandoned track, head to the Tulsa Speedway.

Originally part of the Tulsa fairgrounds, the Tulsa Speedway was closed due to noise complaints from neighbors. If you decide to visit the Tulsa Speedway, there’s plenty of abandoned racetrack accoutrements to explore. The ghostly air of the abandoned track makes the Tulsa Speedway a perfect place to time yourself as you practice outrunning zombies. The grandstands and concession stands are also still intact, though we’re pretty sure any food you might find there is well past its expiration date.

Stock car racing grew out of the American South, and there’s no bigger racing town than Charlotte, North Carolina. It’s home to the NASCAR Hall of Fame and the headquarters of a number of top racing teams. That’s why it’s so surprising that there’s an abandoned racetrack in Charlotte. You’d think that the heart of American car racing would have enough lifeblood to keep all local tracks going, but you’d be wrong.

Let’s say you were hanging out in Charlotte in the 1960s and ’70s and had a car you wanted to race. You’d head over to the Metrolina Speedway, which was known for having all-comers races. Anything that had an engine and four wheels was legal. Think about that for a minute: You could literally have any car racing against any other kind of car.

In the 1970s, Metrolina was paved and used for some NASCAR-sponsored races (NASCAR legend Dale Earnhardt even drove there), but today it’s an abandoned relic in one of the most important racing towns in America.

Racing has always been seen as a fairly masculine activity, so it’s no wonder that Marlboro, Maryland, home of the Marlboro Man (O.K., not really, though Marlboro is right smack in the middle of Maryland’s historical tobacco producing area), would have a racetrack. After all, when inhaling exhaust, smoke from burning tires and hot brake fumes, a lit cigarette may be the least of your worries.

Interesting things have happened in the fields outside of Manassas, Virginia. First, there were two major Civil War battles fought there. Second, and perhaps more importantly, some gearheads started racing cars in a field in 1948 [source: Old Dominion Speedway]. (The races probably involved slightly more beer and slightly less death than the two Manassas battles, but there were likely equal amounts of yelling and smoke.)

Wee Town is one of the most interesting sites on this list because of why it closed. While other tracks closed because of out-of-date facilities, high costs, safety issues or lack of fan interest, Wee Town Outlaw Speedway closed thanks to Mother Nature: The track kept getting flooded. Maybe building a track on a flood plain was a bad idea, but tracks use a lot of land, and land on flood plains is cheaper.

If you look at photos of Wee Town Outlaw Speedway now, it’s one of the most bizarre tracks on this list. Pictures of the site show bleachers set up around what looks like a sizeable pond. You can see tires and walls sticking out from the pond, but otherwise it could be a good facility for swim races. Hey, I think I just came up with a good way to reuse the site.

Sometimes a track is so good it ends up causing its own demise. Many abandoned racetracks peter out because of fan indifference. It’s rare that one closes because of too many fans, but that’s the case for Robinwood Speedway in Gastonia, North Carolina.

Built as a clay track for midget cars (a class of cars that is — you guessed it — smaller than a sprint car or stock car), the Robinwood Speedway was incredibly popular. It hosted the Junior Grand Nationals from 1949 to 1953, which would be a good thing for most tracks [source: Wilson]. High-profile races draw more fans, more fans bring more money, and more money creates plenty of profit for owners. This usually keeps a track open.

Unfortunately for Robinwood, that wasn’t the case. The problem with the speedway’s popularity was that it couldn’t hold all the fans it drew. If a track owner can make money off, say, 5,000 fans, why not build a bigger track and make money off 10,000 fans? The much larger Carolina Speedway was built as the replacement for Robinwood, which was abandoned. If you visit Robinwood, be warned that there’s not all that much to see unless you get a bird’s eye view. The stands and buildings of the Robinwood Speedway are all gone, but remnants of the track can be seen aerially.

Most of us will admit to exceeding the speed limit on the interstate, especially on an interstate as flat and straight as I-70. Still, the I-70 Speedway didn’t refer to the interstate but a racetrack that was alongside it.

The remains of the I-70 Speedway lie outside of Odessa, Missouri. The I-70 Speedway was a short track, and when it was built in 1969, it was a posh place to go see a race. Instead of benches, the stands had individual seats. There were VIP suites, plenty of concession stands and modern (for 1969) bathrooms. The track itself was a paved oval that banked at 28 degrees in the turns and ran for five-eighths of a mile (1,006 meters). In the 1980s, the track was covered in dirt and used for Sprint cars and modified race cars, until the track went back to asphalt in 1988 [source: Hover]. The track was a regular stop on the NASCAR Craftsman Truck Series and hosted many American Speed Association races. After getting a new owner, the I-70 Speedway closed in 2008.

There’s a pretty strong stereotype that car racing is a Southern sport. Blame the “Dukes of Hazzard” and the sport’s roots in moonshine running for that. Like most stereotypes, however, this one is wrong. The Vineland Speedway in Cumberland County, New Jersey, is proof that car racing thrived in the northern part of the U.S. as well. With weekend events that included stock car racing, drag racing, sports car racing and motorcycle racing, the Vineland Speedway had something for every race fan.

North Wilkesboro Speedway is perhaps the best-known abandoned racetrack in the United States. The racetrack is in North Carolina, a state with a rich NASCAR history and legions of car racing fans. Until its closure in 1996, North Wilkesboro Speedway spent nearly 50 years as a stop on NASCAR’s Winston Cup series [source: Green]. In fact, the track actually predates the founding of NASCAR by almost a year, and NASCAR’s first champion, Robert “Red” Byron, was named there.

Photos of the abandoned speedway by photographer Seph Lawless went viral in early 2015, bringing attention to the plight of North Wilkesboro and other abandoned racetracks around the country. The pictures also touched a nerve with racing fans who remembered the glory days at North Wilkesboro Speedway. 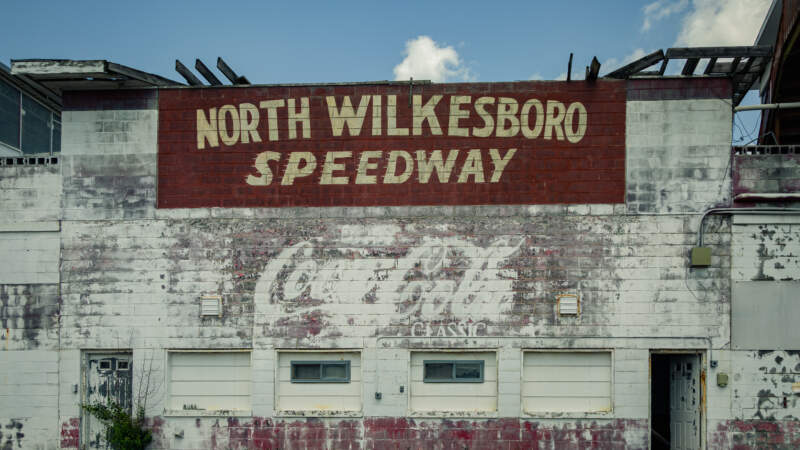